Here's a little history about our experiences at Heritage India. When we first moved to DC, being lovers of Indian food, we went to every Indian restaurant within walking distance of our home even though we were pretty strapped for cash. The first time we went to Heritage India, the first thing we noticed were that the prices were more than other Indian restaurants we had been to. We had heard, however, that the food was excellent there, and that the prices were well worth it. What we had heard was pretty much right on the money. However, I think at the time, the prices compared to other India restaurants (and the $100 bill) blinded us a bit. We also noticed that the service was a bit...rough around the edges.

After our pockets deepened a bit and we did not mind so much spending $100 on dinner at an Indian restaurant, we started going back to Heritage India. Last night was the second time in two months that we stopped by, and it was as good as it has ever been. The lamb korma I had was probably the best I have ever tasted. The lamb was extremely tender and the sauce had a great combination of cashews and spices. It was also not bland like most kormas are at other restaurants.

As usual, Amy ordered the saag paneer. She found it not to her liking, but she has very specific taste when it comes to saag paneer. For those of you who do not know, saag is a spinach curry and paneer is a type of Indian cheese. Amy's complaint was that the saag was too creamy and the paneer was too soft. Like I said though, Amy's taste in this matter is very specific. :) I think Amy's exact words were, "The saag paneer I had at Haandi the other day was better." Next time, she will probably order something besides the saag. It sure isn't our last trip to Heritage India.

One of the things that makes Heritage India more expensive than other Indian restaurants is the wine list. Where other restaurant's wine prices range from $20-30, Heritage ranges from $30-50. However, they have a very good wine selection ranging from many regions of France and the US. Last night we ordered a good Cote Du Rhone that went very well with our meal. One thing to be careful of...The wine, uh, not sure what you call it, pictured below. It is basically a wine bottle holder that can make for a nice mess it you are not careful taking the bottle out (especially when you have already had a couple glasses of wine). Our previous trip, I managed to spill wine all over the table. Luckily we had drank most of it already. On the left you'll see the lamb korma I ordered and on the right, the saag paneer that Amy ordered. 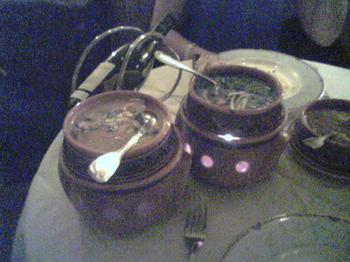 Here are some more pictures from last night. Heritage India is on two floors. On the first floor (which I have no pictures of because it was so dark), is the bar and witing area. When you are seated, the hostess will take you up the stairs to the second floor, where there is another bar, and two dining rooms, seen below. 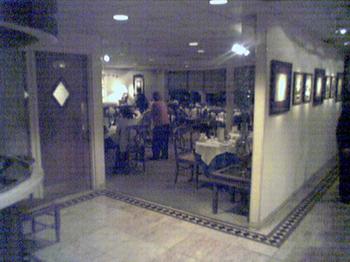 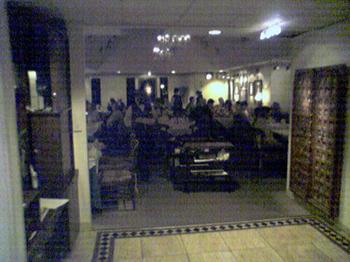 One thing I noticed last night...Inside the menu it says that the owners have restaurants in Germany and in the Czech Republic. I found that quite interesting and odd at the same time, but I guess it is not too uncommon. Heritage also has a location (EDIT: thanks to Balraj Bhasin for pointing out that the Bethesda location is no longer run by Heritage India, but by Sudhir Seth, who previously was affiliated with Bombay Club) on Connecticut Ave, just south of Dupont Circle.

Heritage India, used to be dressier. You used to see people wearing sport coats and dresses there. Last night however, people were pretty casual. Amy even pointed out someone wearing a hat , t-shirt and jeans. I guess just about any clothing will work here, however, Amy and I like to dress it up a bit when we go the Heritage.

The Bethesda location is no longer Heritage, its now called Passage to India. It's operated by Sudhir Seth who used be at Bombay Club then helped set up heritage India then moved to the Bethesda location. There has since been a parting of ways and he no longer has any connection with Heritage.

??? That's wierd. I drove by the other day and the sign said Heritage India. When did this happen?

Heritage India's food is tremendous. The service is atrocious. Once a server called me a liar ("Sir, you are a liar.") and came very, very close to challenging me to a fight in the middle of the rear dining room. HI is one of those restaurants you go too for the food, all the while steeling yourself for atrocious service.

I am not sure if you have tried it yet, but Nirvana is my new favorite. This after years of being devoted to Heritage. Nirvana has amazing service and the food is absolutely divine.

I went to Nirvana and it was...well read this article http://www.dcfoodies.com/2004/07/nirvanaim_unenl.html to find out. To say the least it left me wanting.

I adore Heritage India and go there at least 3-4 times a month, every month. The food is wonderful, but the service really needs work. Last week, I arrived late on a Saturday night and was lingering over wine with my date when a waiter actually sneered at us and made a hand motion signaling us to get out. It was very offensive and there were 3 other parties left in the restaurant, so we were not even the last ones there. Beware . . . . . .

I have loved Heritage for years but did not get to go often because the price was a bit prohibitive. But now that the Dupont location opened; having a great Indian restaurant that close by (finally) gives me an excuse to forget the price and just enjoy the food. Plus, the service there is miles ahead of the Glover Park location. Although sometimes it can be a little *too* attentive

Really!? Interesting. I've never been to the Dupont location, but I have been meaning to get there.

Congrats on your one-year anniversary! The Heritage location in Dupont is quite good and after several visits I have no complaints about service. On weekdays there's a happy hour and appetizers are half-price - what better way to wind down after work than a champagne and THE BEST calimari ever, for less than $10?

last time i went to heritage india i had the best experiance of indian food i ever did. I am therefore surprised to read that someone would prefer a mediocre restaurant like Indique.They have either no idea about good quality Indian food or for that any knowledge of India.Yes, it is on the pricey side but if you want good food and service to compliment it- you have to pay for it.

I'm curious why you think that the people at Indique don't know anything about India...They are the owners of Bombay Bistro in Rockville which is very highly regarded. Lately I have thought that Indique is not quite as good as Heritage, especially after eating at the Dupont location. They both have their strengths though.

I have to jump in here and mention that I am a faithful customer of the Connecticut Ave Heritage India. I have been for a solid year. They have either replaced their entire staff, or taken everyone's advice. I have had nothing but the most attentive and pleasant service from the HI staff. My partner and I, too, searched high and low for good indian in the DC area. Heritage india may be the last one we go to - it is, without question, our favorite.

I'm also a fan of Heritage (both locations) - not bad Indian food at all. I've been to India 6 times and my wife is a good Punjabi girl from North India. BTW, saag is not spinach curry, it's spinach. There's a big difference - especially if you're Indian or just someone who's into food. I just thought I'd let you know ;)

My husband and I have been in the Glover Park area for three years, and up until a month ago, had never been to the Wisconsin Ave. Heritage India. We had of course heard all the rumors of terrible service, as well as some intimation of food that was sometimes on, sometimes off. In the last month we have been to Heritage twice and have another reservation for tonight! The service has been great so far, and the food is simply divine. In a neighborhood with some pretty decent restaurants (Sushi Ko, Busara) Heritage is one of our new favorites.

Heritage is pretty good but everyone is right - the service is NOT pretty good. At least it wasn't in March of 2007. I had the fish curry and it was fantastic - one of the best Indian dishes I've ever had and I love Indian food and eat it all the time!

The food here is definitely very good, but then, so is the food at a lot of other places in the DC area, namely, Indique. That said I still go to Heritage, Dupont for the convenience and when the service is bad, which it is usually is, I just lower the tip. Hopefully, that might teach them to behave better. The sad thing is when one goes in groups of six or more where the tip is included and the service is atrocious and not much you can do about it. I wonder if the waiters are arrogant because they are usually highly educated individuals back home in India and feel like they are now reduced to serving rice to Americans.

This is curious. Heritage India in Glover Park is one of favorite restaurants in all of the DC area and we have only ever had excellent service - and we often go there with loud and messy kids. We order vegetarian - ma ki dal, sag paneer and palak makai are out favorites. We did not like the Dupont location as much (the menu is different) but I admit we only went there once.