P is for Pesce

First off, I want to dedicate this post to Morela at eGullet whose post convinced me to try this place.

Pesce is a small restaurant right off Dupont Circle on P street. You could walk right by it and never know you missed it if it weren't for the chalkboard out front with the menu. Inside, there is no foyer or greeting area. You walk up the ramp and the tables are right there. We walked up to the bar where the hostess greeted us and sat us at a table. We came at 9:30, right as the dinner crowd was finishing, and a bunch of tables had just opened up. Everything -- from the art on the walls to the folk-art on the dishes -- had a fish on it, which gave the restaurant a bit of camp value. It went well with the casual atmosphere.

At Pesce, there is no printed menu. Instead, the menu is a few chalkboards that have that days specials written on them. All of the fish is brought in fresh and the menu changes often. Last night, we had the choice of wild salmon, mahi mahi, marlin, and cod. There were also a bunch of pasta dishes. One in particuliar that sounded really interesting was the tuna bolognese with rigatoni. There was a wide variety of appetizers, ranging from something as simple as a caesar salad to a smoked trout salad, crab cakes, grilled calamari, and mussels. 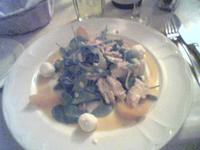 I chose to start with the smoked trout salad, just because it sounded so different from anything I had eaten in a long time. It was cashews (I love cashews), arugula (I think it was arugula), mandarin oranges, shaved fennel, gorgonzola cheese and trout (of course). Finally, it was drizzled with a light citrus dressing. This was a wonderful combination of flavors. Below are before and after photos. As you can tell, it was horrible. "Bring me another please!"

For the main course, Amy went with the salmon dish and I went with the cod. Amy's salmon was served with a black lentil ragu and beet salad. On the other hand, the cod was served with a lobster sauce, mashed potatoes and aparagus. Both of our fish were cooked to perfection, broiled skin side up. Fish ideally is cooked medium (that is unless it is tuna - then it should be RARE). When I first decided to order cod, I was like, "Am I seriously ordering cod?" I mean, cod is usually served fried because it has NO flavor. However, the cod that came with my dish was very fresh and flakey. I've had cod before that was almost chewy, but this was anything but that.

The portions are generous. Amy's salmon was a large chunk of fish. Similarly, I was given a very nice sized piece of cod. The salads were very large as well.

Oh, and I forgot to mention the wine list, which was extremely reasonable! The bottle we ordered, a French chardonnay, only cost $20 (check for the chalkboard of wine specials). I like French chardonnays a lot more than ones from California. They are a much less oaky.

One thing I found quite funny was that our waiter was extremely preoccupied with a couple of women sitting at the table in the middle of the restaurant. I actually think that the waiter was the manager, because he said that the owner's daughter gives him a hard time for putting "Sweetie Pie's Favorite" on the dessert menu about her favorite cheesecake. Anyway, the two women seemed to know everyone at the restaurant, so they must have been friends of the owner or something, but every chance he got, he went over and chatted with them.

We decided to go with Sweetie Pie's recommendation. Best. Cheesecake. EVER!. It is now our favorite as well.

The bill came to about $100. Given that we ordered three courses of food, a bottle of wine, and coffee, I think it was well worth it for how delicious it all tasted. We'll most definitely be going back. If Pesce can repeat the performance last night, I will most likely be adding it to my top 5 list.

Great review! I read it and immediately made plans to go with some friends. We went during restaurant week and had an amazing time. I had the grilled squid and tabbouleh appetizer, the seared scallops with soba noodles entree, and their chocolate dessert. It was some of the best food I've had a in very long time - and I go out to eat quite a bit. Their wait staff was also excellent. I am planning on going back very soon to try out their regular menu. Thanks for turning me on to such a wonderful restaurant!

Great review! Next time you have to try the grilled sardines. It really shows off for the quality of the fish they have at Pesce!
Regards,
Xavier