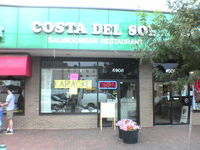 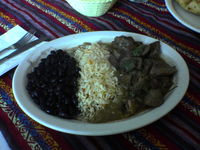 hey, i moved from arlington last year. i'm in ny now but i definitely miss dc.
i will be checking out your blog now for recommendations. i try to get down there every couple of months to visit friends.
got any favorites on M street? used to coach at georgetown..

Oh, how I wish I would have found DCFoodies BEFORE or DURING my trip to Washington D.C. Being a tourist, I of course made all of the wrong decisions concerning food and my stomach (and wallet!) paid for it dearly!

I plan on visiting there again. At least next time I'll know where to eat!

Thanks so much for writing about this place! Costa del Sol was my favorite restaurant in Bethesda. Got to know the staff pretty well--they knew exactly what I wanted as soon as I came in the door. 3 pupusas--pork & cheese, an order of yucca con chicharron, and a Negra Modelo. I live in NYC now and I still go back to Costa del Sol on every trip back home. Glad to hear that Las Margaritas serves the pupusas.

I also got to know the staff here well before the change over. While the dining room has been improved, I don't think the cooking is as good.

I used to think they got a lot of business when Rio Grande was across the street, and the wait there would be 1-2 hours. It was so easy for people just to walk across the street and discover food that was twice as good for half the price.

But once Rio Grange moved, they continued to stay very busy.

Now in addition to Mexican food Margaritas is serving Chilean food including desserts. It's all good..and still friendly.