In my quest to try new restaurants over that last few months, I've been missing my favorite places to dine. So last weekend, in a desperate attempt to have some really good meals, (and to have a couple reasonably priced meals due to taxes...) I returned to 2 Amys and Ray's the Steaks. 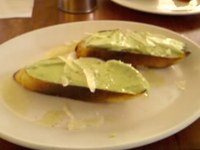 If you've ever seen 2 Amys empty before, you've probably lived in DC since they opened, or you've arrived at 11:30 AM on a Saturday like I did. Within an hour, there was a wait for a table, but in the meantime, I enjoyed a nice quiet restaurant with my wife and son.

Despite the cold weather we've been having, the menu had the fava bean crostini, an instant indicator that spring is here and summer is soon to come. The fava bean crostini is basic in it's nature. Some good grilled bread, a light coating of light green fava bean puree mixed with mascarpone cheese (I think), some shaved Parmesan Reggiano, olive  oil and salt. There are two on the plate, but we had two orders that day. 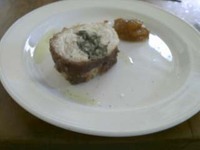 I also had some stuffed rabbit, one of my favorite small plates, this time stuffed with mustard greens and pine nuts. The pancetta that that rabbit was wrapped with was especially crispy and salty this time -- the rabbit meat was a little fatty, but that was a good thing. I hope it's exactly the same the next time I have it.

Our Margherita pizza was exceptionally good as well. The crust was nice and crisp and not quite as floppy as usual. There was a little more cheese on it than usual though. The good news is that Noah FINALLY ate some of the pizza, a major milestone in his childhood development .

The next day, we went to Ray's the Steaks for an unusual Sunday night dinner. It was crowded as usual and there were some impatient people at the door. It seemed that the restaurant was a little behind with their tables because people were taking longer than usual to finish their meals. I didn't mind, but others seemed to be a little less than happy about it.

I didn't realize this until I sat down that the menu on Sunday nights is a little different. There are three options for tasting menus, one of which allows you to order the "Chateaubriand for two". For $30 per person, you get a choice of salad or soup, your share of the Chateaubriand, and a choice of desserts. Plus $10 from every check on Sunday night goes to a local charity. The other options are $25 and $35 with varying options for entrées. I don't know how long this charity menu will exist, so be sure to go soon to take advantage of it.

I tried to stay somewhat healthy and ordered a Caesar salad. Yes, a Caesar salad -- I wished I'd thrown caution to the wind and ordered the crab bisque. Anyway, the Chateaubriand we had amazing as usual, an extremely tender cut of tenderloin, glistening from the red juices that flowed from it when I stuck it with my fork (sorry vegetarian readers, I know this is probably grossing you out).

There are a few more desserts available on Sunday night than usual like some creamy cheesecake, and chocolate or coconut layer cakes, so that's what Amy and I ordered. Amy loved her chocolate cake -- it was moist and rich, but I wasn't so crazy about the cheesecake, which I thought was too creamy and soft. (Maybe it needed to be cooked a little longer?) The cheesecake had great flavor, but the texture was just wrong. This was obviously a fluke because I've had this same dessert at Ray's the Classics a couple times and it's always been perfect.

One last thing I should mention...Ray's the Steaks now has a child seat?! Seriously. I shit you not. There's only one, but I was happy to see it. It was in use, so we still needed to use our own portable high chair.  It was also interesting to see that there were a good deal more families with children at Ray's than usual.

I was at Ray's last week too, on a rare weekday trip into Virginia. We had the Chateaubriand for 2 as well, and lordy it was amazing. The guys at the table next to us were looking at us enviously, even when their strips came. That Sunday night deal is a real steal if you only paid $30 per person.

And oh yeah, I did have the crab bisque, and it was gooood!

I believe RTS began opening on Sunday nights a couple weeks ago (maybe a month ago now) and I think plan to continue it until they move to the Navy Building. Before that they were always closed on Sundays.

We are headed to Ray's Friday with a couple of friends. I htink I have been there 4 times in the last three years. I always enjoy it. I'm glad you've had the same great experiences.

Laura, when are they moving to the Navy building? Is that the one in Courthouse?

The fava bean crostini look and sound great! I am never a fan of working with them in my restaurant if only because of the pain they are to peel, and then peel again. I tend to use edamame instead. (And really, who doesn't like soy?...)

Anyway, looking at the picture, the very light green color leads me to beleive they either didn't bother with the second peeling of the beans, or was it because the puree mixed with something (sour cream, ricotta...) that made it more white?...

I'm not sure exactly when they're moving...I meant to ask, then got sidetracked by the massive amounts of meat on my plate.