"Cheese from All Parts of the World" 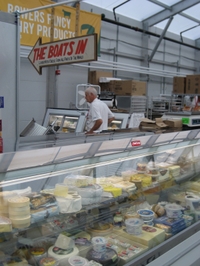 That's what they're promising at Bowers Fancy Dairy Products since 1964, and they deliver: their straightforward website lists seventeen countries from which they carry cheeses.  I stopped by Bowers Fancy Dairy Products this week because I wanted to make this DC landmark the first cheese shop I featured.  To many D.C. Foodies, the phrase "cheese shop" conjures images of relative newcomers Cheesetique and Cowgirl Creamery -- in no particular order.  Bowers has been around 10 times as long as both of them put together.

Despite their relatively small size, Bowers has been the best source for imported cheeses on Capitol Hill for 43 years.  Their cheese counter in the South Hall of Eastern Market has always welcomed regular customers and newcomers alike with a sample of something colorful and unique like Sage Derby or a perennial favorite like Parrano. On weekends, the crowds are often two and three people deep to taste freshly-sliced cheeses and to pick up favorites from around the world. 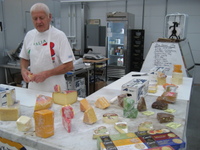 But the fire that gutted most of the South Hall on April 30th dislocated Bowers along with the rest of the markets' permanent residents.  Thankfully, community support for the market's vendors kept them in business through the summer, and on August 25th the temporary East Hall opened with new (and in many cases, improved) facilities for all of the merchants who were displaced.

On a weekday morning, the Saturday and Sunday crowds are gone and you can actually carry on a conversation with the person offering you samples from behind the counter. In some cases, that someone is Ray Bowers or his son, Mike.  If you happen to catch one of the Bowers behind the counter, be sure to talk to them about the history of the place.  If not, you may find your server less chatty...but no less knowledgeable about the cheeses they have to offer. 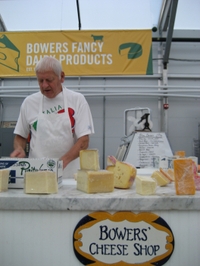 Prices at Bowers Fancy Dairy Products are comparable to those at other cheese shops in and around the District - assuming they carry what Bowers is selling in the first place!  I purchased a small piece of Saint Agur blue cheese from Bowers, where they were selling it for $18.99/lb, and decided to call around to comparison shop.  Calls to several other cheese shops in DC, Arlington and Alexandria confirmed that this was the best price for Saint Agur to be found, and one of the larger shops I called didn't even carry it.

A visit to Eastern Market is a must for anyone who is looking for local produce, quality meats, fresh seafood, and tasty baked goods in one convenient (Metro-accessible) location.  In the heart of Eastern Market, Bowers Fancy Dairy Products is a largely unsung gem for cheese-lovers on Capitol Hill and throughout the District.  If you haven't checked it out yet, you definitely should!

We visited the Cowgirl Creamery location in San Francisco (which was unbelievable), but I had no idea there was one here in DC! I'm so glad that you brought this to your readers' attention. I have thoroughly enjoyed all of your cheese reviews so far.

Thanks for the feedback, Susan! I'm definitely a fan of Cowgirl and Cheesetique, but I would highly recommend checking out Bowers if you're in the Eastern Market area. You have to respect their history, and all of the Market vendors can really use the support.