For my first review of a single cheese, I thought it would be appropriate to look at something local.  And what better way to find a great local cheese than to visit one of the weekly farmers' markets throughout the city? 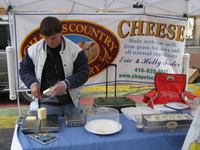 On Thursday, I paid a visit to the weekly FreshFarm Market that takes place on 8th Street between D and E, a short walk from Gallery Place and the Verizon Center.  Toward the northern end of the block, I came across a stand with a large banner that proudly proclaimed "CHEESE."

Chapel's Country Creamery, a family-run farm in Easton, Maryland, prides themselves on making raw milk cheeses from their own grass-fed cows.  They control the entire cheese making process, from start to finish.  At the market, they were offering samples of six different cheeses, with the majority of them being variations on cheddar. I tasted several of them and found them all to taste pretty much as advertised.  The 'Crab Spice Cheddar' had a distinct flavor of Old Bay seasoning, and the 'Garlic and Chive Cheddar' reminded me of Cotswold cheese - though with a little bit of a buttery flavor as a result of the cheddar base. 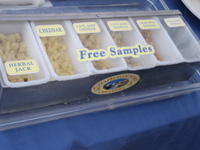 What really caught my eye was their 'Cave Aged Cheddar,' a block of which was plated and displayed front and center.  I asked about the caves they used and learned that they bring the cheese from their farm to a small group of caves just over the Pennsylvania border.  The cheddar is aged in these caves for up to a year - roughly two or three times as long as their basic cheddars.  While in the cave, the cheese develops a thin but attractive rind and a deeper, nuttier taste. 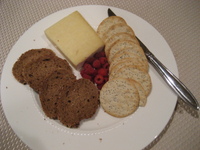 I purchased a quarter of a pound for $4.25 and watched it sliced from the block in front of my eyes.  Taking it home, I let it sit to soften a bit and then plated it with some cracked pepper crackers, a dark wheat baguette and some fall raspberries which I also purchased at the market. The sweetness of the raspberries and the molasses in the bread both served to highlight the sharper cheddar notes, and the black pepper in the crackers provided a nice contrast to the more buttery and nutty flavors that the aging process had imparted to the cheese.

This is not a melting cheddar; it holds up well on the plate and softens only slightly as it warms up.  I would definitely recommend it as a worthy addition to a cheese plate that also includes a soft cheese like a Brie and a saltier cheese like a Gorgonzola.  If you're looking to pair it with wines, you're in luck.  Almost any wine will drink well with a smooth cheddar like this, from a crisp Pinot Grigio to a full-bodied red like a Cabernet.  For best results, however, I would recommend trying it with a peppery Syrah/Shiraz.

Six types of cheese with an emphasis on cheddar
Cave-Aged Cheddar sells for $17/lb.

Description:  Smooth and buttery with a nutty finish, this firm, raw milk cow's cheese is aged for up to a year in caves in southern Pennsylvania.  A thin, edible rind encloses this slightly salty but very mellow cheddar.