Parrano: A taste of Italy, direct from Holland 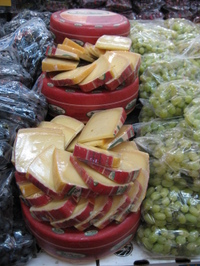 Parrano is a cheese that holds a special place in my heart.  It was the first cheese I tasted that represented a step outside the comfort zone of Cheddar, Swiss, Parmesan and all of the other usual suspects that can be found in most grocery stores.  The truly unique flavor blew me away, and it inspired me to start branching out and trying all kinds of new cheeses: artisanal and mass-produced, creamy and salty, soft and firm, mild and sharp.  At the time, my wife and I nicknamed it "God's cheese" - it was just that good.  Though I no longer consider it with quite the same reverence, Parrano remains a staple when I am planning a cheese plate or just longing for an old favorite.

Parrano is produced by Uniekaas, the largest cheese producer in the Netherlands.  Not content to simply offer Gouda, Edam, and other traditional Dutch cheeses, Uniekaas set out to create something special...something "sort of Italian."  They combined the nutty flavor of a Reggiano with the texture and sweetness of a Gouda, and they called the result Parrano after a municipality in Umbria. 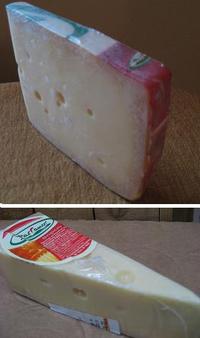 It is a pasteurized, cow's milk cheese that is aged for five months.  The colorful casings of the twenty pound wheels are decorated with a logo and descriptive information about the cheese (these should not be eaten, but I prefer to leave the casing on Parrano when serving it for visual effect).  It is a semi-soft cheese that is easily sliced or grated.

And it is ubiquitous.  Parrano can be found in supermarkets, cheese shops, and specialty grocers alike.  The only place I was unable to find it this week was Cowgirl Creamery, where I was told that they do not carry it because it is not an artisanal cheese (they were quick to suggest an artisanal alternative that I intend to try soon for comparison's sake).  Depending on the retailer, you will either find it in tall, thin wedges that show rind on three sides, or shorter, thicker wedges cut from half a wheel that will only have rind at the end and on the bottom.

I was surprised to learn that prices for Parrano can vary WIDELY depending on where you buy.  And I was shocked to learn that the best prices could be found at Whole Foods!  Despite their reputation for premium foods at premium prices, they sell Parrano for only $8.99 a pound - the same price, by the way, as I found at Trader Joe's.  The highest price I found was at Harris Teeter, where the same cheese was selling for more than twice as much - $17.99.  Local cheese shops quoted prices ranging from $9.99 to $15.50 per pound. 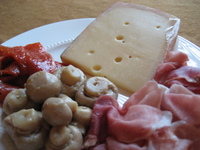 The salty, nutty flavors in Parrano pair well with bolder Italian red wines like Chiantis and other Sangioveses, while the sweeter undertones make it a great candidate to pair with beer as well.  I like to serve it with sliced prosciutto, olives and the marinated vegetables typical to an Italian antipasto, as I find its flavor a little overwhelming for fruits and nuts.

My taste in cheese may have matured since my first introduction to Parrano, but I continue to enjoy it.  No matter how many artisanal rarities and raw-milk marvels I sample, Parrano remains a "gateway cheese" - one of the first cheeses I recommend to someone who is looking to try something new.

Parrano and goat gouda constantly vie for first place in my heart! Glad to hear that I'm not the only one with a love of Parrano.

Parrano rules! Like Mike, this was the first cheese I tasted that made me realize that there were better, more exotic cheeses out there the crappy Brie that you find on the Giant Food cheese section.