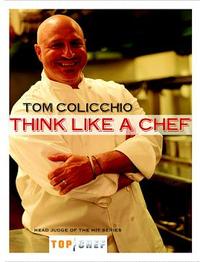 Calling "Think Like a Chef" a cookbook is like calling a Sherlock Holmes novel a detective story.  Tom Colicchio's book goes beyond the basic formula to offer something new, something interesting.  "How a chef thinks about food" is the phrase Colicchio uses in his preface to describe what follows, and "Think Like a Chef" certainly delivers.

In 2000, when the book was first released, Tom Colicchio was the successful chef of Gramercy Tavern who had attracted a loyal following among the Foodies of New York, but he was nowhere near the celebrity he is now.  Craft had not yet opened (that would occur in March of the following year), and Top Chef was still six years away.  Seven years later, "Think Like a Chef" has been re-released, taking full advantage of Colicchio's star power.  The cover art now features him smiling broadly, and it identifies him as "Head Judge of the Hit Series 'Top Chef.'"  But this is no vanity project - you won't find Colicchio name-dropping his way through a list of Gramercy Tavern favorites.

The book still features the unique approach to cooking that sets it apart from simple recipe collections.  It progresses, organically, from a few basic techniques to a few key ingredients and then on to recipes involving some of Colicchio's favorite ingredients and "trilogies" (three ingredients whose flavors simply work together, according to the chef).  Before it gets started, it even offers advice on "how to use the book," encouraging the audience to read all the way through the book to best grasp what is being discussed and to follow the progression that Colicchio has laid out to truly absorb the process.

"Think Like a Chef" begins, like a good chef should, with technique.  The first section of the book walks the reader through five basic techniques: roasting, braising, blanching, stock-making and sauce-making.  With these five skills in your culinary arsenal, so many seemingly complicated dishes become significantly easier.  Colicchio is a great teacher - he guides you step by step without giving the impression that he is dumbing things down for you.  Along the way, he provides anecdotes and asides that further humanize the text and give insight into the chef's approach to cooking.

Once each technique has been explained and demonstrated with a simple recipe, it is followed by several more complex recipes, each of which uses the technique.  Striped bass, sirloin, and leg of lamb are all roasted with a variety of herbs and seasonings, and the small adjustments that turn a general technique into a specific set of steps for a recipe are highlighted.

From here, Colicchio moves on to "studies" of three basic ingredients - roasted tomatoes, pan-roasted mushrooms and braised artichokes.  As in the previous section, he takes the time to walk you through the basic recipe before elaborating on it and using it as the inspiration for a dizzying variety of recipes.  This, says Colicchio, is the key to thinking like a chef - allowing yourself to be led by the ingredients you find at your disposal in different directions using the techniques at your command.  Just reading through this section, you feel yourself starting to understand what he means...at one point, I realized that I was reading a recipe and mentally adjusting it to better suit my own tastes and a few other ingredients I had picked up at the farmers' market that weekend.

The remaining sections of the book move from the theoretical to the practical - a series of recipes for each of three seasonal trilogies shows the surprising ways the same ingredients can be combined to create diverse flavor profiles, and a section of favorites provides a (very) few of Colicchio's favorite dishes from his own kitchen.

As instructed by the chef, I read through the book from beginning to end before I even thought about attempting any of the recipes inside.  I was pleasantly surprised by the narrative voice and the flow of the book - I didn't feel like I was reading a reference book or some kind of flat, lifeless text.  I really did feel like I was gaining insight into Tom Colicchio's mind and his approach to his craft.

After reading the book, I was that much more eager to put the chef's lessons into practice.  A visit to  the farmers' market turned up 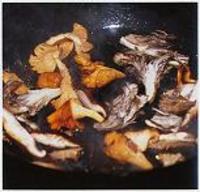 a beautiful selection of wild mushrooms, and I decided then and there that my first attempt at a recipe from the book would be the pan-roasted mushrooms that form the basis of the second "study."  I had already learned from reading through the section that the single most important thing to keep in mind when roasting vegetables and mushrooms is not to crowd the pan - doing so prevents the moisture that cooks out from rapidly evaporating and basically boils your veggies until they are lifeless and rubbery.

So I cooked the mushrooms in three batches (resisting my usual urge to just throw them all in at once) and seasoned them with salt and pepper.  When I turned them, I noted with some satisfaction the way the mushrooms had begun to brown without losing their shape or their texture.  Adding some garlic, butter and herbs I brought each batch to readiness and set it aside until all of the mushrooms were cooked.  At the end I brought all three batches back together and seasoned them once more as I warmed them just prior to serving.  Though I overdid the salt a bit, my wife and I agreed that these were by far the best mushrooms I had ever made, and they were a perfect accompaniment to our oven-roasted pork tenderloin.  I found the directions easy to follow, and the results spoke for themselves.  This was a recipe worth holding onto - as I expect many of the ideas from the book will be.

"Think Like a Chef" invites the reader to develop a new way of looking at what goes into a kitchen - as well as what comes out.  Tom Colicchio has provided an excellent resource for Foodies who are long on appreciation but short on raw talent.  I'm already looking forward to next year's farmers' markets and the creative eye with which I will approach them thanks to this book.

Great review, Mike. This book sounds like it is both empowering and inspiring. With all the wonderful farmers markets we are fortunate to have here, we have year round opportunity to have local ingredients speak to us about how best to prepare them.

I totally want to read this book...and see if he knows what he's talking about! :)