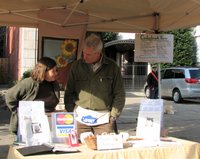 Whether you view scrapple as a humble use of otherwise “throw-away” leftover scraps or a culinary abomination, I hope you will consider this modest loaf of porky goodness. I did last Sunday during a visit to Cedarbrook Farm at the Dupont Farmers Market. It was an offal trip down memory lane.

Having grown up in Philadelphia, I am no stranger to scrapple. I was introduced to the pig “scrap” product as a youngster and I grew to like it long before I knew what was in it. Scrapple, when fried, is crispy on the outside and creamy in the middle. It marries well with fried or poached eggs and a piece of toast. It’s also pretty good with just a puddle of ketchup to dip it in. Later, like hot dogs, I would still eat scrapple but would not want to see it made. Well, maybe I still don’t, but I’m willing to be more secure in my quest for (not main stream) food choices which use the parts you won‘t see lining the cases of your local supermarket. Where once I thought fillet mignon was the king of steaks, I now prefer hangar or flatiron cuts. Not too long ago, I would not think to eat organ meat, until I had lamb kidney in Restaurant Eve’s Tasting Room. The kidney had the most intense lamb flavor I’d ever tasted. It was a revelation and something that many people are missing out on but would probably enjoy immensely (particularly when tendered by a chef like Cathal Armstrong) if they would embrace more parts of the animal.

Before it became foodie de rigueur and chic to eat organ meat, or before the movement which I like to call WWFD? (what would Fergus do?), frugal farmers had been using “nose to tail” practices to utilize all of the animal which they raised to produce food. Relating to scrapple, the pig was butchered, the blood sausage and liverwurst etc. were made, and what was leftover at the very end was made into scrapple. The epicenter of scrapple’s origin is reported to be in Eastern Pennsylvania, with either Dutch settlers who lived in Chester County (just outside of Philadelphia) or the Pennsylvania Dutch who settled in Lancaster County. In either scenario, scrapple is a product made by Old World German settlers (who made a related loaf called panhus) with New World ingredients. Scrapple also enjoys a strong local connection. George Washington’s Pennsylvania Dutch chef introduced him to this dish which he enjoyed all of his life. Today, scrapple can commonly be found throughout the Mid-Atlantic states.

If you don’t care to know what’s in scrapple, just skip on ahead. According to Wikipedia:

"Scrapple is typically made of hog offal, such as the head, heart, liver and other scraps which are boiled with any bones attached (often the entire head), to make a broth. Once cooked, bones and fat are discarded, the meat is reserved, and (dry) cornmeal is boiled in the broth to make a mush. The meat, finely minced, is returned, and seasonings, typically sage, thyme, savory, and others are added. The mush is cast into loaves, and allowed to cool thoroughly until gelled. The proportions and seasoning are very much a matter of the region and the cook's taste."

Now, if you’re still with me, let me tell you what it tastes like. It is a cross between breakfast sausage(herbs) , bacon (salt) and polenta (cornmeal). As I wrote above, it is usually served at breakfast with fried eggs but is also eaten as a sandwich ( a Delaware tradition). Accompaniments to scrapple include ketchup, apple butter, apple sauce and maple syrup.

My grandmother, who lived her whole life in Lebanon PA, served her scrapple with Turkey syrup, a thick dark syrup with a malt flavor.

I had never heard of Turkey syrup. It sounds good. Now you have me missing Lebanon bologna...on a potato roll..with yellow mustard.

Keep eating stuff like this and organ meats, and enjoy your daily Lipitor pill...

I was hoping to read something about how the scrapple from CB farm is and how it might compare to your. This post doesn't have anything to do with Cedarbrook Farm scrapple, which is the title of the post. It just fuels a trip down memory lane. How was this scrapple?

Josh,
Sorry I wasn't descriptive enough. To compare it to say Habbersett scrapple, CB Farms scrapple is milder. I'm used to more herbs such as sage. It's also less dense, more creamy. Hope that helps.
Thanks for reading.