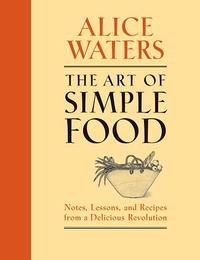 All of these now-commonplace foodie conventions (and an impressive list of others) can be attributed, either directly or indirectly, to the influence of Alice Waters and Chez Panisse, her world-famous restaurant in Berkeley, CA.  So profound is Waters' impact and that of the "California Cuisine" that she helped to popularize that David Kamp devotes an entire chapter to Waters, Chez Panisse and their culinary contributions in "The United States of Arugula," his brilliant foodie history.

Now, more than thirty-five years after Chez Panisse opened its doors, Alice Waters has released a cookbook to share the secrets of her "Delicious Revolution," as it was dubbed in a 2003 American Masters episode on PBS.  She distills her experiences into nine basic rules that should govern anyone who wants to cook (and eat) well.

"This book is for everyone who wants to learn to cook, or to become a better cook," says Waters in the introduction to the text.  And on that front, she delivers.  The book begins with nineteen "lessons" that cover the basics of shopping, preparation and cooking.  Some of these lessons cover specific courses like soups, pastas, desserts and, of course, salads.  Others deal with cooking techniques like grilling, simmering, slow-cooking, and frying.

Each "lesson" chapter begins with a brief paragraph introducing the concept that will be addressed before jumping right into the topic at hand.  Rather than discussing bread making in an academic context, for example, Waters takes only a few paragraphs to talk about factors that impact the taste and quality of breads before walking the reader through a recipe for "Herb Bread or Pizza Dough."  Lessons that deal with techniques are approached in a similar fashion, with an emphasis on learning through doing in the form of recipes.

The second section of the book is a compendium of additional recipes entitled "At the Table."  These recipes are separated into broad categories (sauces, meats, eggs and cheese, etc.) and then presented in straightforward fashion. Not surprisingly, the single largest category is the one for vegetables - Waters provides seventy-two different recipes for everything from fennel and chard to potatoes and tomatoes.

It is the presentation of these recipes (Waters' status notwithstanding) that truly distinguishes "The Art of Simple Food" from similar cookbooks.  Waters eschews the traditional recipe format (a list of ingredients followed by a series of instructions) in favor of a more - go figure - organic approach.  Each recipe is a narrative in and of itself, instructing you to:

The offset, bold-faced ingredients are still easily noticed, and the as-you-go instructions help to reduce the risk of omitting a key item or skipping a step.  Most recipes are followed by a set of bulleted recommendations on ways to vary the end result without significantly changing the basic technique.

To put the book to the test, I attempted to follow Waters' recipes for Grilled Lamb Loin Chops and Lentil Salad.  The first recipe was quintessentially Waters - it called for nothing more than salt, pepper and oil to season the meat and a total cooking time of 10 minutes - and it allowed the full, rich flavor of the lamb to shine through.  The Lentil Salad was simply dressed with red-wine vinegar, extra virgin olive oil, salt and pepper, and the lentils were combined with shallots and parsley for added taste and texture.  I opted to include two of the recommended variations - chopped cucumber and sweet red pepper - to give the dish some more crunch.  The final product was flavorful, but unlikely to become a staple in our household.

A word of warning: anyone who reads the title and subtitle ("Notes, Lessons and Recipes from a Delicious Revolution") and expects a memoir or even a few anecdotes is in for a disappointment.  This is a simple cookbook extolling the virtues of simple food, though it is accessible, clearly written and a pleasure to work with in the kitchen.  That should come as no surprise to those who see Alice Waters as one of the people who helped awaken the American palate to the joys of "fresh, local, seasonal ingredients" in the '70s and as a tireless advocate for sustainable agriculture and "edible education" today.

"and it allowed the full, rich flavor of the lamb to shine through." I've always found lamb to be kinda "meh" and helped with spices and sauce.

I received a number of cookbooks for the holidays this year. It was remarkable how similar Alice Water's themes and food philosophies were to Nigella Lawson's in How to Eat (although the recipes were substantially different).

I'm looking forward to contrasting both books in philosophy and flavor over the next year!

Jim - I've definitely had some bland lamb in the past (particularly if using a previously frozen piece), so I know what you mean. But when I use good, fresh lamb, I am always struck by a deeper, earthier flavor than when I'm using beef or any other meat.

JD - Lucky you! Please check in from time to time and let us know what recipes you've tried and how they turn out.

I think most of the best chefs out there today are advocating similar philosophies...but Waters definitely has a claim to being on of the trendsetters who have shaped others' approaches.

The recipe presentation in Water's cookbook is no innovation: the Joy of Cooking, quite possibly the most traditional, ubiquitous American cookbook (and most influential to the home cook), has been doing this since 1931. I'm surprised this didn't occur to you.

Thanks for the clarification, Desyl - I'm glad you were able to set the record straight. To be honest, I've never read the Joy of Cooking, so I was unaware that they did it first.

A wonderful book that I am still re-reading. It is about food from Waters' perspective, which makes it all about Alice without her speaking in the first person. A book every cook and chef should read (as they should Joy of Cooking !).