Tucked away on a quiet block of N Street just south of Dupont Circle, the Tabard Inn is one of those places that you don't quite discover until you've been in Washington for a while - and then you wish you had known about it forever.  The hotel has 40 guest rooms spread out across three adjoining townhouses, and each room is uniquely decorated.  Looking out a south-facing upstairs window at the dome of St. Matthew's Cathedral, it is easy to imagine yourself in some picturesque Italian village.

But the Tabard Inn is not just a Hilton alternative - its restaurant boasts the talents of Huw Griffiths, the man recognized by the Restaurant Association of Metropolitan Washington as 2007 Pastry Chef of the Year, and its cozy parlor is a great place to curl up with a hot beverage and one of his creations on a cold evening.  Although the restaurant's main courses left something to be desired on a recent visit, the starters and desserts definitely saved the day. 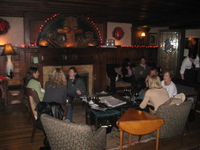 To get to the Tabard Inn's eponymous restaurant, you pass through the lobby of the hotel and into a parlor that is dominated by a stone fireplace and its massive wooden mantle.  Chairs and benches throughout the dark-paneled room provide plenty of space for people waiting to be seated in the restaurant, but I would highly recommend a visit for the sake of the parlor itself - a limited menu of light fare and desserts is available from an attentive waitstaff.  My wife tried the Hot Buttered Rum despite the fact that she is not normally a fan of rum, and she thought it was absolutely amazing.  I enjoyed a hot apple cider spiked with Knob Creek bourbon instead of rum - a special request that they accommodated without hesitation.  What a great way to start!

We were encouraged to let the hostess know when we were ready to be seated for dinner, a nice change of pace from overbooked restaurants who make you wait while they hurry other diners out.  Once we did so, we were quickly shown to a table in a small upstairs dining room (not the main room) with views of the Inn's courtyard through the nearby windows.  Our server quickly and ably walked us through the menu and informed us that there are no off-menu specials because new menus are printed every day.  She also pointed us toward a short list of wines that are imported directly from Italy by the hotel.  These represent some great values, but the unique relationship between the Tabard and the growers means that you'll have a hard time tracking the wines down later should you want to buy them yourself.  We shared a bottle of Deltetto Roero Arneis, a crisp white wine from Roero in northern Piemonte that was wonderful with our various seafood and pork dishes.

A generous basket of bread was brought to the table once we had placed our orders, and this was our first introduction to Huw Griffiths' skills.  The basket contained several slices each of light rye, focaccia and sourdough olive breads, each handmade by the pastry chef that day.  Although one of my dining companions found the focaccia a bit too salty for her taste, we all agreed that the breads were delicious and lived up to the hype.

Soon after that, our appetizers arrived.  With several salads, soups and hot dishes ranging from $7 to $11, there are plenty of choices to tempt you, and you would be wise to start with something.  An arugula salad that featured roasted pears and pine nuts had its sweetness nicely tempered by a balsamic vinaigrette, and fried gingered calamari were light and tender - though none of us could detect the ginger.  My favorite starter was a combination of mussels and spicy lamb sausage served in a silky curry sauce that was rich with a subtle heat.  A garnish of watercress lent a fresh, peppery note that complemented the dish nicely.  To this point, the meal was wonderful.

Unfortunately, we had decidedly less luck with our entrees.  Despite a wide variety of dishes (10 choices in all, ranging from $21 to $33), there were very few that begged to be tried.  My mother opted for a seafood gumbo that featured house-made creole sausage.  Though the sausage was tasty and the seafood well-cooked, there was something about the flavor of the gumbo that seemed out of place - a dusky smokiness that none of us could recall in other gumbos we had eaten (and preferred).  My wife's tagliarini pasta suffered from too much salt - despite the inherent saltiness of the squid's ink used to color the pasta as well as the scallops and the grilled calamari, the dish was topped with a spoonful of trout roe that only added to the overly briny flavor.  I ordered a suckling pig roulade that was topped with a deliciously tangy fig gastrique, but I was disappointed by the meat used - the cut of pork I was served was at least 1/3 fat, and the skin had a soft, chewy consistency.  Only my aunt's crab cake was an unmitigated success, with large lumps of sweet crab meat barely held together by any filler at all and served with a wonderful remoulade.

We had been warned to save room for dessert, because Huw Griffith's pastries and cakes are truly the stars of the show (desserts run $7 to $10).  A pear tarte with an airy pastry shell came with a scoop of house-made maple ice cream, and the flavors were amazing.  A vanilla and malt cheesecake with a banana creme anglaise was decadent and too rich for any of us to finish.  A tall slice of moist chocolate cake was served with a scoop of mint-chocolate chip ice cream that tasted like garden-fresh peppermint, instead of some artificial mint flavor.  But the true standout of the evening was the pumpkin pecan bread pudding, accompanied by dulce de leche ice cream.  Picture a warm, sweet, gooey confection with a base of house-baked bread tempered by savory spices and you've got a good idea of just how wonderful it was.  Any disappointments brought on by our entrees were momentarily forgotten over dessert.

Unfortunately, the main courses were not the only disappointment.  Service during this trip was surprisingly uneven, as well.  At no point in our meal did our server stop by to check on us, save to present the dessert menus.  We went through the entire meal without having our water glasses refilled once, only to have them topped off twice during dessert.  And, most disturbingly, all of my companions' dishes made it to the table a full five minutes before my roulade, leaving them to look at their cooling plates of seafood while they politely waited for my dish to arrive.  All of this despite the fact that the restaurant was not full at any point during our two-hour meal.

As I said at the beginning of this post, I consider the Tabard Inn one of Washington's hidden gems, and I always look forward to visiting when the weather turns cold so I can enjoy the warmth of the fireplace in the parlor.  The romantic appeal of the Inn cannot be overlooked, either, which is why I have often recommended it to friends as a great 'special occasion' spot.  But I have found the quality of their main courses to be steadily declining over the past year or so.  The desserts and hot drinks (our server informed us that Griffiths was responsible for the fantastic Hot Buttered Rum, as well) remain reason enough to visit, but there is too much competition in this price range for the kitchen to turn out unimpressive dishes like the ones we had.

Details:
Dress Code: Business/Dress Casual
Parking: Valet parking is available for dinner patrons for $7.  Street parking is available nearby but can be difficult to find due to the proximity to Dupont Circle.
Closest Metro: Dupont Circle (use the south exit)
Reservations: Taken and recommended. Tabard Inn is not currently part of OpenTable.
Baby-Child friendly Rating: 0 diapers (to borrow Jason's system).  The quiet and somewhat romantic atmosphere coupled with the limited child-friendly menu options make this a bad choice for families with small children.
Bathroom Rating: Two small unisex bathrooms are both clean and well-kept.  A framed letter on the wall from one of the vintners whose wines they import directly reflects the special relationships that go into their wine purchases.

I often find myself wondering where I can find a delicious desert and a cozy atmosphere after dining out - do you know how late they serve desert?

I had a very mixed experience there too, but the cinnamon donuts are amazing. Luckily, they do them takeout for breakfast in the morning. Saves you the service troubles and the bad acoustics.

Their mains are a little too... yuppie, I guess, for me anyway. More complicated than usually tastes good unless exceptionally well prepared.

Downtowner - I called over to the Tabard Inn and asked them, and they informed me that the kitchen is open until roughly 2:30 every night. In the event that there is no server in the parlor, you can simply order from the bar (just inside the restaurant) and take your food and beverage out into the parlor.

Great idea to make it a nightcap!

I ate here this weekend and we had a fabulous meal. My short ribs were delicious, and the other members in my party enjoyed the canneloni and the duck (I tried the duck and it was incredible). The apple tart for dessert was the best -- it just melts in your mouth, and is served with marscapone vanilla gelato. The wine list is superb. Atmosphere is fantastic -- very charming. I will be back!