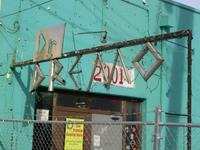 On the 27th of January the doors will close forever on what is certainly one of the most unique and intriguing bars in all of Arlington County-- Dr Dremo's Taphouse. Located on Clarendon Boulevard between Courthouse and Rosslyn, Dremo's unique location on top of a hill affords it one of the most unobstructed views of Washington DC in Arlington County-- I fondly remember its parking lot as one of the best ground level locations to watch the July 4th fireworks over the Mall. It is this great view I fear which sealed the bar's fate. After years of harassment from the Arlington County government and other local groups, the owners, the Stewart family, have finally had the land sold out from under them to real estate developers. This location will soon be home to 141 brand new luxury condos. To be fair, the closure may have been inevitable as the building is falling apart and has been doing so since the bar opened as Bardo Rodeo back in the early Nineties: but that's the real charm of the place! Dr Dremo's is one of the best examples of an endangered species in the DC area, the dive bar, and as such it will be greatly missed.

Dremo's occupies a sprawling space that had once been a Oldsmobile dealership, and it utilizes every square inch. The potential reveler is greeted in the main room to a sprawling beaten copper bar, high ceilings, concrete floors, and a massive mish-mash of eclectic kitsch the likes of which may only be seen in a liberal, long lived-institution like Dremo's. Second-hand furniture litters the darkened barroom, where patrons sit amongst old arcade machines surrounded by graffiti and Christmas light covered walls. Towards the back wall a retrofitted fermentation tank houses a private little eight-top set apart from the smoke and noise of the rest of the bar. Downstairs is another massive room featuring the area's cheapest pool, darts, and shuffleboard, and which is frequent host to the most raucous open mike comedy and music you are likely to find. In the warmer months customers could retreat out the back door and into the bar's massive open-air seating area and what I believe to be the metropolitan area's only 'sandbar.' Patronage ranges from the elderly local to the underaged college student and everyone in-between, and while the tattooed and pierced staff may intimidate some at first blush, I have never received rude service or attitude regardless of dress or company.

While I would never describe the food as haute cuisine, Dremo's offers a nicely priced and well prepared  selection of bar favorites such as burgers, 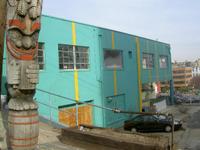 wings and nachos, and a few unexpected specialty items like vegetarian chili, hummus, wraps, and one of the best quesadillas in town for the price. The wine list is poor-to-nonexistent, and they haven't a license to serve hard alcohol so cocktails are right out-- but when it comes to beer, Dr Dremo's really shines. The bar's twenty seven taps host a frequently circulating selection of classics, micro-brews and imports. From PBR to Delirium Tremens (in proper glassware!), Dremo's taps run the gamut at prices ranging from $10 to $17.50 a pitcher. Also featured is a selection of house beers; once made on premise, these specials are now contract brewed using the owners' decade-old recipes at the Shenandoah Brewing Company out of Alexandria. Dremo's label is the only one I've ever tasted offering a self styled "Chocolate Donut Beer"-- it was absolutely undrinkable, but I had to appreciate the attempt. That beer notwithstanding, and in defiance of the dive bar atmosphere, the beer is almost always fresh and I've never tasted that unpleasant and worrisome "dirty line flavor" that haunts the bars of the apathetic and lazy.

Ownership plans to reopen and is currently searching for another location in the area, and here's wishing them the best of luck-- but either way, I can't help but feel a pang of sorrow for the departure of yet another independently owned and operated, successful business, especially one such as this. Dremo's embraced its status as a dive bar without wallowing in its trappings. While the bathrooms might have leaked and the air conditioning was practically nonexistent, commitment to quality was never left by the wayside. Despite the smoke and torn upholstery there was a certain cozy, homey atmosphere that is rarely found in the corporate chain-bars of today. Whether out of nostalgia or morbid curiosity, try to make some time this Restaurant Week to pay one more visit Dr. Dremo's, one of the last of the dinosaur dive bars. I can't imagine we'll see its like again.

Dress Code: Casual... Super-Casual.... Just don't forget your pants, okay?
Parking: Adjoining parking lot on Clarendon Blvd, plenty of street parking. (Don't park in the Hollywood Video lot-- you will be towed)
Closest Metro: Walking distance from both Courthouse and Rosslyn.
Children: Can get pretty smokey and the language is 'colorful,' so not advised after 8 PM.
Bathroom: Reasonably clean, if malfunctioning.

Thanks for the great article Rob. Dremos has always been one of my favorites, mainly because of the great beer at great prices and unpretentious atmosphere. I've had female friends go in sweats and feel at home. I'm really hoping they can reopen elsewhere and keep the same feel.