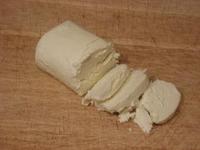 D.C. Foodies are fortunate to have quite a few choices when it comes to locally-produced cheeses.  In fact, the Atlas of American Artisan Cheese includes more than two dozen dairy farms in Maryland, Virginia, Pennsylvania and West Virginia, many of which sell their cheeses at farmers' markets and retail locations in and around Washington.  Of course there are cow's milk cheeses (like the Cave-Aged Cheddar from Chapel's Country Creamery), and there are even a few farms specializing in sheep's milk cheese (the well-known Everona Dairy, for example).  But to taste all of our local offerings, you cannot overlook goat's milk cheese, or chevre.

Goat cheese, with its sharp tang and lingering flavor, is not subtle.  As a result, it tends to elicit strong reactions - either you love it or you hate it.  And goat cheese doesn't exactly play well with others.  Sliced into rounds or crumbled atop a salad, chevre's bite dominates the milder flavors that accompany it.  A little goes a long way in recipes, too, where the tart flavor is frequently used to offset rich, sweet notes (think pumpkin soup).

As it turns out, however, there is a local goat cheese that offers an alternative.  Allegheny Chevre, made by Firefly Farms in nearby Bittinger, Maryland, is a fresh chevre, which means it has not been ripened or aged.  The result is a smooth, creamy cheese that has almost none of the expected tang.  After allowing the cheese to come to room temperature, we were struck by the texture - my wife hit the nail on the head when she said it looked like whipped cream cheese.  The flavor of the cheese reinforced the comparison, as it was silky and mild, more like creme fraiche or cream cheese than goat cheese.  It was a very different experience from the sharp, almost sour flavor of so many other goat cheeses that I've tasted.

The mild, creamy flavor and soft, spreadable texture practically cried out to for a baguette, and I was fortunate enough to grab one of the Breadline offerings with the cheese at Cowgirl Creamery.  With some sliced apples and a salty blue cheese, it made a great start to a light dinner.  The following day, I decided to put the Allegheny Chevre's 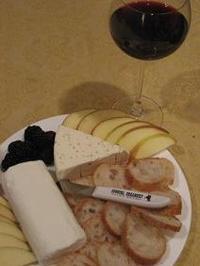 mild quality to another test, spreading it atop a split section of the baguette and topping that with some roasted peppers.  After 30 seconds in the microwave, the cheese had warmed nicely and absorbed some of the oil from the peppers, giving it a richer flavor and highlighting what little tang it held.

The best place to pick up Allegheny Chevre is at the Dupont Circle FreshFarm Market on Sundays - Firefly Farms is there every week, selling and offering samples of their entire range of goat cheeses.  Once you've worked your way up from the Allegheny Chevre, you can look forward to such treats as their Merry-Goat-Round (a goat's milk Brie), Buche Noire (an aged and ash-coated log), and their Mountain Top Bleu (take a guess).  Rumor has it that they will be sampling an as-yet-unnamed washed-rind variety this weekend, so do yourself a favor and get there early if you want a taste of something truly new!

If you just can't wait until the weekend, you can order through their website, though there is a markup for the cost of delivery.  Or you can find the same 9-ounce packages that sell for $7 at the FreshFarm Market for $7.50 at Cowgirl Creamery, not a bad markup for the convenience of daily availability.

Although I am a fan of goat cheese and its acidic bite, I know that it is not for everyone.  But for anyone looking to ease their way into the world of chevre, Firefly Farms' Allegheny Chevre is a great place to start.  Even if it doesn't completely win you over, you'll be glad you gave it a shot.

Allegheny Chevre is one of my favorites. I'm looking forward to trying the new washed rind cheese and the bleu cheese which I've overlooked until now.
Have you tried the Blue Suede Moo at Keswick? I want to give it another try on Sunday-my sample I tasted 2 weeks ago was a bit salty and not tangy enough.

Ramona - Did you make it to the Farmers' Market today? If so, how was the new cheese from Firefly? I haven't tried Keswick's blue, but I've enjoyed some of their others.

Mike - I'm flattered, I think. But I'm just one of the new folks here at DCFoodies, and cheese just happens to be my focus. I hope you're enjoying the posts.

Mike-My lazy butt was home keeping warm-so lame. I was out and about on Sat. doing foodie-related activities and stimulating the local economy ;-)
Next week I'll definitely get back into the routine. I want to try those cheeses!
You are the cheese-guy, btw! You've been inspiring me to try new cheeses, even some true stinkers (Stinking Bishop, anyone?)