The Problem with Pinot

About four years ago a certain movie came out that made a big splash on the indie movie scene. While this movie may have received huge amounts of critical acclaim, including the Oscar for Best Screenplay and the Golden Globe for Best Picture, its influence on the world of wine would prove to be more dramatic than its effect on international cinema. I am speaking of course of Paul Anderson's immortal Alien vs. Predator.

Oops -- actually, I think that one was up for a Razzie; of course I mean Alexander Payne's Sideways. This buddy flick about two misanthropes schmoozing and boozing around wine country is only peripherally about wine, but its effect on the industry was dramatic. For the uninitiated, the film's main character is a manic-depressive failed writer named Miles (played with superb asininity by Paul Giamati), a stereotypical wine bore of the highest caliber, who is treated by his soon-to-be-hitched buddy Jack to a whirlwind tour of Santa Barbara wine country. Throughout, the pair get into a number of scrapes and sample copious amounts of Miles' favorite wine, Pinot Noir, about which he waxes poetic and, in the end, proves a metaphor for his thoughts on relationships and love. 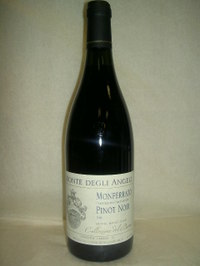 Now if you are going to pick a grape as a metaphor for relationships, Pinot Noir is apt: it is very difficult to cultivate, heavily influenced by its environs, can break your heart and ruin you in a bad year, is subtle and nuanced, takes awhile to grow accustomed to, and for many, ignites a sort of passion that other grapes just can't illicit. Oh, and it's also great with pork!

Though meant simply as a character-developing metaphor, Miles' impassioned speech inspired many a novice wine drinker to pursue a love affair with the fickle grape, and the results were shocking. One study by Nielsen showed an increase in Pinot Noir sales by volume of over 15% in the four months following the release of the film. Having been working in a wine store at the time I can corroborate this: we couldn't keep the stuff on the shelves! And of course, come next vintage, prices of Pinot -- the good, the bad, and the ugly-- were through the roof. Now, I don't have any particular problem with market forces in general, so I understand the increased demand producing a higher price. The problem is that supply by no means remained constant, with a) producers who had no business making Pinot Noir getting into the game, and b) producers of sub-standard product starting to cut corners to crank out more of the stuff even as they raised prices in keeping with the trend. The result was that soon the great stuff was priced out of the average consumer's hands, the good stuff was not nearly the value it once was, the vast majority of juice on the market was giving the rest a bad name. 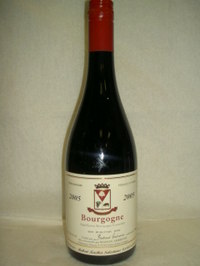 Pinot Noir is a difficult grape to grow, and it does not take well to being churned out in mass quantities-- thus, the vast majority of what is out there is but a ghost of the real thing, hinting in only the vaguest sense at those sublime sensations exalted by the film's protagonist. And though four years down the line the initial burst of interest may have subsided a bit, Pinot's popularity remains ranked amongst the top of the reds. Though prices remain inordinately high there are a few really great ones out there for the money that are readily available and may give you some insight into Miles' grandiose rhetoric.

Despite the weakness of our dollar, I still feel that looking abroad for your Pinot fix is the safest bet -- though there are some fine domestic ones out there, the best are just too well-known and too pricey for everyday use. From the northwest of Italy (not a country known for great Pinot Noir) the Monte Degli Angeli Monferrato Pinot Noir 2005 is a pleasant surprise. Blended with a small portion of the native Italian Nebbiolo, this light red has a pleasing fresh raspberry nose which gives way to a lightly tannined, crisp, mineralic finish -- and all this for about $8! The similarly-priced Les Jamelles Pinot Noir 2005 from the Languedoc region of France offers a bit more fruit and a slightly rounder texture than the Monte Degli, but is still a great and easy-to-find inexpensive Pinot that lacks the cloyingly fruity or unpleasantly green flavors common of most of its inexpensive brothers. 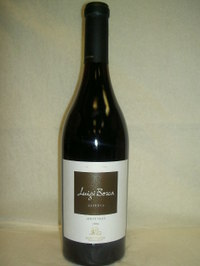 2006. Like most Kiwi Pinots this one is much lighter than its domestic or South American counterparts, and bright acidity is the name of the game, making this an easy $16 pick to accompany a wide range of foods. If you are a fan of more esoteric wines, the Maison Ambroise Bourgogne Rouge 2005 may be  more your speed. This wine hails from Pinot Noir's homeland of Burgundy, France, and brings with it a blackberry and horse manure nose, leading to roasted meat and raspberry on a solid tannic backbone. I know that may not sound appealing, but it makes an amazing pair with lamb or game, retails for under $20, and is brought in by local importer Robert Kacher, so it should be relatively easy to find. Finally, if you prefer your wine on the fuller and fruiter side, try the Luigi Bosca Pinot Noir Reserve 2006. This wine represents the rare Pinot Noir from Argentina, a country more often associated with blockbuster Malbecs. Bright and fresh cherry dominates the nose, giving way to darker fruit, chocolate, and flowers on a firm, medium-bodied structure -- like the Ambroise this wine is locally imported, commonly available, and often had for less than $20.

While these may not take one to the level of existential bliss hinted at by Sideways' hapless protagonist, they represent a fine first foray into the pleasures offered by Pinot Noir, that most variable and vexing of vines. If your aim is to embark on a similar love affair, my advice is to start out simple; maybe buy a bottle and have a glass or two while watching a movie. I know a good one you might consider -- I tell you, nothing accompanies fine wine better than the epic struggle between Aliens and Predators.

Great post-I love Sideways. I was hooked into that movie from the moment Miles closes his ear to fully taste his first glass of wine.
When I think of Pinot, I think of the Willamette Valley. How do those Pinots stack up to the ones you mention? Have they suffered from the Sideways effect? With the increase in Pinot sales, what did you see with f-ing Merlots?
Last, several years ago I was turned on to Argentinian Malbecs at Rick's Wine in Alexandria. Love them.

We still see Pinots as our biggest movers, especially in "by-the-glass" sales...I'm hearing more interest in getting back into Merlot though...we'll see where it all goes!

God, the "f-ing Merlots" comment! That was an even bigger problem than the Pinot Noir thing. Mind you, I think that Merlot was in for a fall anyhow considering how popular it had been and the amount of garbage that resulted on the market. Either way, just after "Sideways" we couldn't sell Merlot for anything. The annoying part about that comment was that it was pretty much a joke that no one got: That wine that Miles makes such a big deal about throughout the movie, the 1961 Cheval Blanc-- Mostly Merlot. I think this was a brilliant character development device, but since it was such an obscure reference it just kind of sparked a knee jerk reaction with the viewers. Ugh. Fortunately, yes, that has been turning around as people realize that Merlot is really quite a chameleon, and is very hard to generalize about, in fact.

Yeah, Ramona, Willamette Pinots have gone up a bit, but some of them remain pretty good values. In addition, Oregon's climate rarely yields a poor vintage, so they are safe year in year out. I quite like Archery Summit and Patricia Green, myself.

Oh, and if you like the movie, by the by, try reading the book. I really enjoyed it, and it gives a very different insight into Miles' character in particular.

I can't get my (knows nothing about wine)husband to drink Merlot anymore thanks to that movie. Every time we go to buy wine I get treated with "I am NOT DRINKING MERLOT." Of course, if I pour and don't tell, he never knows.