The M Street drag in lower Georgetown has long been a bastion of the hip and cool in DC — yet somehow, certain establishments manage to fly just under the radar. Pizzeria Paradiso, a longtime 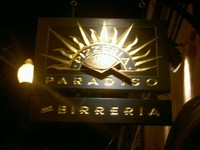 institution is well known, and deservedly so, for the quality of its wood-fired pies. However, relatively few people know of the other great stuff that lurks down below.

The DC craft beer scene is a relatively new development compared to those in other major metropolitan areas. Yes, I know, we have the Brickskeller, which has held the world's record for most beers in one location for several years. But the 'Skeller, by its very nature (i.e., huge), is lumbering and static. Maintaining a list such as theirs, some 1000+ beers strong, necessitates that the status quo reigns; sure, there is bound to be the occasional change in the lineup, but when placed among its hundreds and hundreds of brethren, who is bound to notice the newbie?

To the Brickskeller's behemoth, Birreria Paradiso offers an elegant counterpoint. Small and dynamic, it represents the very quintessence of a proper latter day spirits program, so lacking in the District. Housed in the cozy downstairs area of the Georgetown location, the Birreria is a welcoming space, featuring a 10 seater bar, a fireplace lounge, and table seating for about 20.

Well, I guess calling the beer program "small" only works in comparison to the Guinness record holder.  In fact, the Birreria's selection is quite impressive, being some 80+ strong in the bottle department. Selections run the gamut from the $5.50 Austrian Pilsner to several $50 Belgian Bieres Brut (the closest thing any beer lover is going to find to the glories of vintage Champagne). The bottle menu is extremely well laid out, oriented by category with general descriptions, with each brew identified with its own pithy couple of lines. Given the specificity, you are very unlikely to end up with something unexpected. The selection features a wide array of both domestic and imported novelties; if you are a fan of rare bottle-conditioned ales, be aware that Paradiso is near the top of the allocation list, and you will find things there you may never see in any other bar or retail store. In addition they regularly stock the full compliment of Belgian Trappist beers (at least, those that are available) and local favorites from Dogfish Head and Victory. 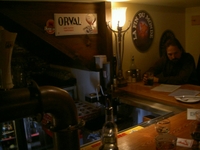 While the bottle list is well appointed, it is in the draft department where I think the Birreria really shows its stuff. Their draught selections are constantly rotated, featuring some of the best and hardest-to-find beers in the country. Do not come here if you are looking for Miller Lite or Coors— if your idea of a complicated wheat beer is Blue Moon, you may be a bit put out. What you should expect is a full complement of beers you've never heard of, and assume that nearly all of their 16 taps will be different than the last time you'd visited. Paradiso is also one of the few venues in town where you can experience real cask ale: served unpasturized and unfiltered, unadulterated by CO2 or nitrogen, at room temperature, this stuff is the closest you will find to those served in the British pubs of yesteryear. If you’d like to know what you are getting into before you go, rest assured that the list on the website is kept very up to date despite the disclaimer.

Sampling the Paradiso draft lineup is a great way for both the expert and the neophyte to learn a thing or two. Bartenders are keen to let you taste new offerings, and Manager/Buyer Greg Jasgur, a one-man beer encyclopedia, is usually running in and out of the place. Tuesday and Wednesday the Birreria features half-priced drafts and pizza specials from 5 to 7 pm. This happy hour is easily one of the best in town, and as such the space becomes packed with in-the-know regulars. I heartily suggest you go, but expect to stand and have your personal space a bit encroached. Bartenders tend to be very competent, but given the crowds and the Birreria's commitment to serving their beers in the proper glassware, you may have to wait a bit for your next drink. Be patient, and don't rush: many of the beers on draft are 10% abv or higher, so resist the urge to get as many in as possible, especially if you are driving. If you can find a spare bit of flat space, have a pizza, too. Beer has the same food pairing potential as any beverage, wine included, and with the breadth of choices available you are sure to find a match for your favorite toppings.

Brickskellar's Achilles' heel is their inventory. They can brag all they want about the thousands of beers on their list, but they never have your first choice (more like your fifth). Does Paradiso actually have everything on their beer list? Rustico always has my first choice beer, as well as PBR for when I'm broke and just want to get hammered.

Hip and cool? More like Eurotrashy and drunk-fratty, methinks. But I do like Paradiso. Do they still have their two-fer Tuesday deal downstairs?

Two corrections: Cask ale is not served at room temperature. At least it shouldn't be. It's served at "cellar temperature" which is about 55 degrees F.

Also, real ale is not served in the British pubs of yesteryear. It's alive and well today in most public houses across the UK. Particular thanks for that goes to CAMRA, http://www.camra.org.uk

Good call on Brickskeller- I have been disappointed there numerous times by the perpetual lack of certain items they claim to have. Also, refrigeration seems to be a problem. As far as I have seen, Monkey, Paradiso almost always has what they claim to have- and if they don't, it doesn't take them 20 minutes to let you know!

I thought that's what constituted 'hip and cool' anymore, John! I mean, if the area can support a storefront that sells approximately 6 tubes of hand cream and nothing else, it must be happening! Anyhow, I don't know the promotion you are talking about, so I am guessing they do not. Tues and Wed happy hours feature half price draughts and discounted half 8" pizzas, though.

Thanks, Paul- you are right, 'cellar temperature' is a much more apt description for the proper serving temp for this beer (and for red wine, for that matter). I came across the CAMRA site while I was looking for info on Cask Ale. Great movement, not unlike Slow Food. I haven't been getting out too much lately; do you, or anyone else, know of other bars in DC that serve this stuff? I think Rustico does, and I would think RFD should, though they weren't last time I'd visited.

Yes, twofer tuesday is still alive and well both upstairs and downstairs. 1 large plate of antipasto, 1 large pizza and a dessert sampler (tiramisu, biscotti, chocolate salami) and your choice of a bottle of red or white wine or a large bottle of Chimay Grand Reserve with dinner and a Storm King with dessert... $50.