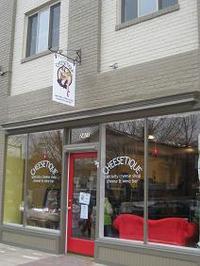 For a lot of people in the Washington area, Cheesetique was a revelation when it first opened four years ago this month.  Even longtime devotees of Calvert-Woodley's La Cheeserie and Bower's Fancy Dairy Products in Eastern Market were thrilled to find an actual store whose main focus was CHEESE.

Located on Mount Vernon Avenue in picturesque Del Ray, Cheesetique got some great press early on and D.C. Foodies' word-of-mouth quickly made it a hit.  It probably didn't hurt that Jill Erber, the owner, proprietor and 'Cheese Lady,' has such a deep and obvious passion for what she does.  Despite the small space and the rather noticeable aroma (heavenly for cheese-lovers, but an acquired taste for sure), patrons would line up five and six deep to wait for the kind of attention usually only found at tailors' shops and other more personal establishments.  Jill (or one of her able assistants) takes the time to walk each customer through the myriad cheeses she has to offer, eliciting likes and dislikes, offering tastes as she goes and helping to arrive at the perfect choice. 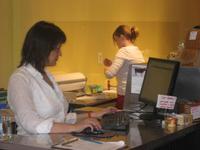 She can then help you match it with the perfect wine, or recommend some Fra'Mani salumi or some tupelo honey to serve alongside.  As Cheesetique's popularity continued to grow, Jill made it a point to bring in a wide range of foods and accessories to accompany the star of the show.  Arrangements with nearby bakeries and farms introduced fresh bread and organic meats to the inventory, and a schedule of wildly popular cheese tasting classes has helped to broaden even the most knowledgeable palettes. 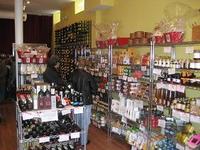 With Cheesetique's loyal following and a desire to continue to offer more and more complementary products to go with her cheeses, it was only a matter of time before Jill felt the need to expand.  Thankfully, the opportunity presented itself toward the end of last year, and Jill announced that she would be moving a few doors down into a space almost THREE TIMES as large as the original.  On Saturday, the doors opened to this new and improved Cheesetique, and the response was impressive - even with added staff and increased floor space, lines were as long as I have ever seen them in the original store.

Fans of Cheesetique would have been happy if the expansion were the only improvement, but there was even more good news: plans to integrate a full-service tasting bar into the new Cheesetique! 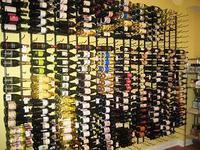 By next week, those plans should be a reality.  Tuesday through Saturday, from 5 PM to 9 PM, Cheesetique will offer a wine and cheese bar where guests can sample a range of products sold in the store.  The plan is to offer cheese plates and charcuterie, as well as fondues, panini and quiche from local producers.  The focus will be on small, artisanal purveyors and is likely to rotate.  In addition to the food offerings, wines will be available by the glass, so you can try before you buy.  When I stopped by on Saturday, the bar space was not yet open, so I can't offer any sneak-peeks, but I am definitely planning to check it out for myself sooner rather than later. 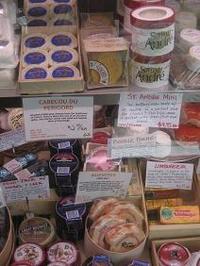 In terms of selection, Cheesetique stocks a wider range of cheeses than most of their competitors because they have more space and do not limit themselves to artisanally-produced cheeses (like Cowgirl Creamery does).  So you can find Saint Andre brie side-by-side with Sweet Grass Dairy's "Green Hill" here, allowing for easy comparison.  Their prices are competitive, though I have found a few instances where they were on the higher-end of the scale compared to other cheese shops in the DC area.  Even so, I find myself drawn to Cheesetique for its warm, inviting atmosphere, its friendly staff and their ability to track my purchases so they can help me recall "that great melty goat cheese I bought last month" (it was the Monocacy Ash I wrote about a few months back).

Despite the inconvenience of its location in Del Ray (which is set back from Glebe Road and Route 1 and is not really served by the Metro), D.C. Foodies will have even more reason to check out Mount Vernon Avenue in the near future. 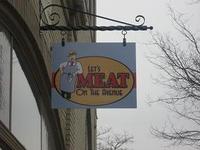 Jill informed me that the space formerly occupied by Cheesetique will now house a purveyor of grass-fed beef and other naturally-raised meats.  Run by an Australian butcher, it will be called "Let's Meat on the Avenue" and is likely to open within the next few months.  The new sign is already hanging out front, and it looks to have the same light-hearted approach to quality foods as its predecessor.

Cheesetique is closed on Mondays, but you owe it to yourself to pay a visit during the week if you've never been.  And if you are a real cheese-lover, you need only ask "What's good?" and give a few examples of what you enjoy to experience a new favorite you didn't even know existed.

Thanks for the tip on the Meat store - that's so exciting!