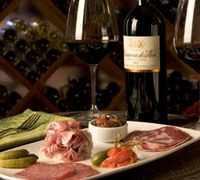 Heard around the DC Foodie blogosphere this week.....If you read Tim Carman's column "Young and Hungry" in the Washington City Paper, you may have noticed a new writer this week. Melissa McCart of Counter Intelligence published her debut article "The Right Stuff", which highlights the skills of Restaurant Eve's young, but dedicated charcuterie maven Dan Fisher.

As DC Foodies reported last week, local baristas participated in a latte art competition. According to DCist, we had a strong showing.

Also reported in last week's Weekly Blog Round Up was the departure of Chef Amy Brandwein from Roberto Donna's Bebo Trattoria in Crystal City. Chef Brandwein's new venture in the Ritz-Carlton Pentagon City will be called "Fyve" and is scheduled to open in March. Read about it here on Don Rockwell.

Speaking of openings, here is some news about Tom Powers' new location for his restaurant, Corduroy. Apparently, the talent who are helping to sculpt his vision are the muses behind such restaurants as Zatynia, Oyamel and Acadiana, according to Foodservice Monthly's Sauce on the Side.

In the most recent Wednesday WaPo TomChat, a chatter pondered whether or not it was worthwhile to secure the chef's table at Brasserie Beck with a deposit and signed contract. The last time I did this, I was getting married, not eating dinner. Also posited in Tom's chat was yet another word or phrase that puts the peeve in pet peeve. This week's winner was "gastropub" because gastro just wasn't appetizing to one poster. Last, what perks my ears is anything to do with subs. If you're wondering where to get a good one, chatters this week recommend Vace, The Italian Store, Mangialardo's and Deli City.

Do any DC Foodie readers have a favorite place to get a sub? A pet peeve to share?

Oh! So glad that you are looking for places to get good subs. I haven't found any after 10 years of living here, but maybe I'm just not looking in the right places... I'd also like to know - in this area - do more people say 'sub' or 'hoagie'. Just a thought!

I really like the Weekly Blog Roundup and hearing the latest chatter :) keep it up :)

I talked about the great subs at A. Litteri in my post a few weeks back - http://www.dcfoodies.com/2008/01/a-litteri-inc-.html

Several of the commenters also spoke favorably of Mangialardo's, and I can now say from experience that they were right about the Italian subs at Mangialardo's. Haven't tried any other varieties (turkey, roast beef, ham, etc.) but their G-Man is DELICIOUS.

I've already declared my love for any and all subs at A. Litteri, so I think that definitely belongs on the list - a more authentic version of what the Italian Store offers.

J-Coll, I believe the sandwich is referred to as a sub in these parts. I was playing around a bit because I'm from Philly were they are called hoagies. I'm pretty used to the term sub now and in fact, I just finished a tuna sub from Subway (Lent and all....).
Emily, I'm having a lot of fun writing the Round Up. I think it will be a fixture at DC Foodies!
Mike...I really enjoy the subs at The Italian Store-especially the hard rolls. But, I think it's time I tried Mangialardo's.

The Dupont Market on 18th is one of my favorite places in DC to grab a sandwich. I've been looking for a deli where I can buy a chicken cutlet sandwich. Every time I find a place claiming to have that, it turns out to be a chicken fingers on a sandwich or grilled chicken. Is it that hard to bread a chicken breast?? Any suggestions.