The Bar at Brasserie Beck 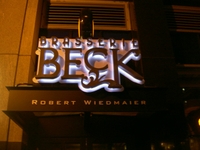 Last year Marcel's esteemed chef/owner Robert Wiedmaier opened Brasserie Beck to great fanfare and accolades. A welcome addition to the growing McPherson square neighborhood, the Brasserie works to be to beer and bistro fare what Marcel's is to wine and haute cuisine. Having only been in once before, my girlfriend and I decided to swing by the other night on a jaunt downtown.

This particular evening the bar was packed, an unusual occurrence at most DC bars on a Tuesday. Pressing in as close as possible to the small marble bar, we did our best to take a look at the much touted beer list. As I remembered from our previous visit, Beck is indeed heaven for the aficionado of Belgian beer. Buyer/Beer Guru Bill Catron has put together a fine and comprehensive collection. Belgium is to beer what France is to wine, and the menu here certainly does the motherland proud. With a selection of 11 drafts and over 100 bottles to be had, the list is kind of overwhelming; even given the care taken to describe each bottle, by page 12 you will have likely forgotten where you'd begun. I would almost certainly have asked the bartender for his advice, if only I could get within two yards of him. On my previous visit, though, we sat at a bar table, where service was extremely spotty despite the bar being empty, and the waitress offered little help with our questions. 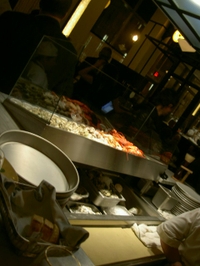 Being a bit set adrift I went with a beer with which I am quite familiar, the Brouwerij Bavik Pilsener. I have to admit that given the full house, bar service was prompt, and I quickly received my beer in a proper, branded glass. The importance of serving beer in the proper vessel cannot be overstated, and Beck certainly has taken this truth to heart, as every beer I saw being served featured its own esoteric piece of glassware. My Bavik was nice, with a body not unlike the more well known Stella Artois, but with a more pleasing nutty, yeasty character. Unfortunately, my Bavik was also tiny, maybe 10 oz at the most, and at $7 a glass without any apprisal, that is unacceptable.

During the brief period between our first and second drinks, we espied the raw bar display, which appeared to feature a fine selection of oysters and other fresh seafood. Being on a bit of a shellfish kick, and having by then staked out a meager bit of bar space, we figured we'd indulge. Our half dozen came out quickly, but I found it hard to believe that what we were given bore any relation to those bivalves on display. Up close, these oysters looked dry, shriveled, and like my beer, tiny. Hoping appearances might have been deceiving we dove in, but these sad little shellfish tasted exactly as they appeared— dried out, flavorless, and hardly half a mouthful. As I'd said, we ordered on a bit of a lark, so when we were presented with the bill, which included a sixteen dollar charge for the underwhelming oysters, I was irritated.

Having read so many great things about Brasserie Beck, not the least of which on this very website, I have to say I am surprised that my experiences have been so mediocre. I have seen none of the exquisite service for which the restaurant is so acclaimed, and though I have to give the beer list its due, the prices across the board are inexcusably high. Add to that the level of frustration I experienced with the restaurant's Flash-heavy website, and I have to surmise that Brasserie Beck, like many a downtown eatery, emphasizes style over substance in order to justify their prestige pricing. I hope that I am wrong (and am sure that I will hear a word or two to that end), but even with a beer list as impressive as theirs, I cannot echo the predominate praise.

I think my previous post was more about the food and restaurant service, but I tend to avoid the bar in my trips there so I think your comments are relevant if you consider the bar. It IS way too small for the number of people that crowd in there.

While the bar may be a good spot to check out a beer, a crowded bar is never a good place to check out the food, unless you enjoy being jostled.

That being said, I have never had the oyesters at Beck. The mussels on the other hand have been of consistent high quality. Also, don;t sell the wine list short.

So, if you want an enyobale experience with your girlfriend, consider getting a table!

I totally agree about the beer prices. The glasses are so small for the prices you're paying for. Who would pay $8-$10 for a 10oz beer?

Does anyone take into account the value of the dollar vs the euro for the beer prices?

Also the last time I checked most Belgian beer is very high in alcohol content, I am glad to pay the extra sum to get quality beer.
If a beer is 12% or higher isn't that the same as drinking 2 or 3 domestics? and you would pay how much for that? 14? 16? 20?

I think that you need to take these points into consideration, I happen to think that Becks has a great list and one of the best in the city.

Thank you, Keith: I do plan to get a table there someday. I know the restaurant is supposed to be very good, I am just a bit discouraged by what I've found at the bar. It is a well established fact, though, that a great restaurant may have a sub-par bar, and vice versa. I just had never heard anything to that effect about Beck.

Oh, I agree, Joey; I don't mind paying more for the good stuff, and I know that imports are just generally more expensive and are often higher in alcohol (though Bavik is only 5.2% abv). My issues with Beck is that 1) they aren't forthcoming about serving size, and 2) their prices in relation to the rest of the city are unreasonably high. For instance, compare their beer list prices to those of Paradiso, which I reviewed several weeks ago: $3 more for Chimay Grand Reserve, $3.50 more for Rochefort 8, $15 more for Deus!

The elephant in the room is that most of the beers on Beck's list are available elsewhere at better prices. Yes, I understand, they are in a high rent area, but this is something that should be mentioned. If you can these beers at a better price elsewhere, why shouldn't you? I have not found the ambiance or service sufficient to convince me that Beck should be the default.

My boyfriend and I went to Beck a couple of days ago. The experience overall was good but I second the sentiments expressed above regarding prices. The beers are way overpriced. I understand the arguments regarding exchange rate, alcohol content, etc. But when it comes down to it, you're still being gouged by the prices on the beers. We had a large bottle (750 mL) of one of their artisanal beers, and while the beer was excellent, we had to force ourselves to drink slowly because it was a $25 bottle and we didn't want to have to order another! As for the food, the bread and butter at the beginning is better than that of most restaurants. We shared a steak tartare appetizer, which at $20 was extremely overpriced. The portion was tiny and the tartare itself was practically more relish/seasonings than meat. In case the exec chef reads this comment, PLEASE tone down the heavy relish/pickle flavor in the tartare! You're ruining a perfectly good tartare by seasoning it to death!! There is also no excuse for the $18 price tag for such a tiny quantity of tartare. We expected more. At Les Halles you get way more for around $15, and even at 1789 you get a similar quantity (that is incomparably better) for around $14-15.

For my main course, I had the lamb shank with white beans. The lamb was flavorful and tender, and the white beans were a great complement. My boyfriend had the mussels in chorizo fennel sauce. His dish was good also but we both noticed that the quality of the chorizo wasn't outstanding, i.e. it wasn't nearly as good as chorizo you'd have at any tapas bar in the city.

Overall, it was a good meal but very overpriced. Skip the tartare, drink your beer slowly, and enjoy those moules frites! PS - The people at the front desk can be a bit snobby. They tried to get us to eat dinner at these makeshift tables by the bar, urging me that "the entire menu" was available there. Who wants to spend $60 bucks on a weekday dinner to sit next to a noisy bar? I didn't put up with it, I politely made it clear that we weren't going to stay if we couldn't get a table in the restaurant area and...voila! a table opened up :)

I agree the beer is expensive, but I do find some of my favorite beers here that I can't find anywhere else. Also, I agree with comment above about the staff at the front desk - they really can be a bit snobby. Generally, the food is OK, not great.

WOw, those oysters were small. BUt don't worry things have changed. I ate at BB a few nights ago and ordered the half dozen oysters and were served with GIANT ones. I haven't seen oysters so big and had to resort to slicing a few of them in half before eating. It was actually a bit of a turn off. BUt I can't really complain.

I was there last week and everything was very good. I still don't like the prices of the beer here, but I don't think there's a way around it given the weakness of the dollar. The only complaint that I had was that the lamb shank was a little bland and needed a bit more seasoning. Other than that, everything was perfect.

Oyster types vary in size. It is silly to complain about oysters that are "small" when certain varieties are in fact known to be smaller than others but taste better to those who prefer them. Bigger is not always better when it comes to oysters.