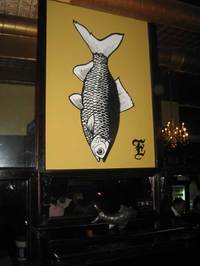 On the corner of King and S.Washington St. in Alexandria, stands Eamonn's, the small fish and chips "joint" that brings bold flavor to a normally bland dish. If you're expecting something grandiose or luxurious because it's associated with the Armstrongs, just forget about it. As I was sitting there waiting for my food to come out, a guy walked in the door, looked around, and said "This is it?!" What were you expecting dude?

Eamonn's is anything but your fine dining establishment, but that doesn't mean that the food will leave you disappointed. I recently went there with Mike Bober, another one of the writers here at DCFoodies.com, and we basically ordered the entire menu (relax, it's not very big). Here's what our experience was like. 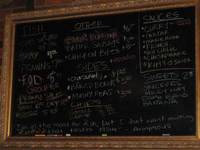 If you didn't get the point already, the dining room is very small (four tables in total and a bar with 3 seats) and the seating is first come, first sit. Don't sit at a table when you first come in, but go up to the cash register and order. The menu is on the chalkboard about the cash register, and to your left, you'll see the sole tap of Guinness ($5.25 for 16oz in a plastic cup).

The menu is simple with Chips, Fish, Sauces, "Other Stuff", Fried Sweets, and Booze, and everything is a la carte although you get one container of sauce per fish or "other stuff" you order. Chips come in small  ($2.50) or large ($3.50) and aren't crispy and light like Belgian frites, or even your local fast food place. Quite the opposite, they're thick cut and greasy. I don't know if the point is to try to be authentic chips, I wouldn't know because I've never been to Britain, but I didn't care much for them.

The day that Mike and I were there, they had a grouper special so we ordered that instead of the regular cod. The grouper had a nice texture and flavor, not too fishy and was meaty enough to hold together when we dipped it in the sauces. We also has some of the Ray (or Stingray), which comes with the bones in it. The bones are more cartilage than hard bones, but you'd best pick them out before attempting to eat the fish. We found that the ray was rather difficult to eat. The breading on the fish could've been crispier in the end. 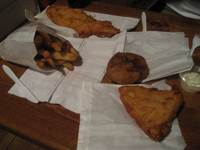 We also tried the fried battered "burgher", which is exactly what it sounds like. There are no cheese or bun options, but the burger is deep fried in batter and very well done. But that doesn't matter much because it's absolutely amazing and decadent, and I thought it was the best thing we ate there. The sauces are really what make the meal at Eamonn's. Our favorite was the spicy curry sauce, which wasn't too heavy or creamy at all. I was half expecting a curry mayonnaise, but this really not that thick. All of the sauces were pretty good, but our favorites were the Marie Rose (think McDonald's special sauce) and the Fronch (French).

To finish off our meal, I couldn't help but get the deep-fried Snickers. This was my first deep-fried Snickers and until I had one, I really didn't know what I was missing. They batter and deep-fry the Snickers, and then dust it with cinnamon sugar. It comes out hot and oozing, is nothing pretty to look at, and is messy to eat, but it's worth the trouble.

At about 7 PM, I noticed the person who was running the front reach up and up some of the prices about $0.25 and $0.50. It seems that if you get there before 7 PM, they give you a discount. Perhaps it's a happy hour special. 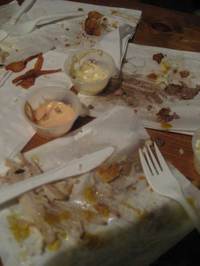 After the meal, we exiting Eamonn's and attempted to get into PX, which lies upstairs from The Chipper, but alas, we were rejected like the common scum that we are. Actually, they were fully booked so next time I'll think ahead and make a reservation. Instead, we walked down to the Restaurant Eve Bar and had a couple drinks there, which were probably just as good in the end.

As for Eamonn's, if I were a local to Alexandria, I'd probably be there quite often, especially given the other option of the Popeye's a few doors down. However, I don't think it warrants a special trip to Alexandria just for the fish and chips.

Details:
Dress Code: Casual, very casual
Parking: Street or Pay lot around the corner.
Smoking: Not Allowed.
Closest Metro: King Street
Reservations: Not taken
Baby-Child friendly rating: 2 diapers - no child seats or kids menu, but it's a casual environment so it's definitely a place you can bring small children.
Amy's Bathroom Rating - the provide all of the basic functions...

I'm sorry I couldn't meet up with you! I've been several times, living nearby. The fries CAN be greasy,but it they're done right, they are not greasy, golden on the outside and feathery light on the inside.
For me, the surest bet is the standard cod. I've tried the "prawns" and it was pretty bad. Inside it was gummy and the outside was overdone.
It is hit and miss. I think it has a lot to do with who is cooking and how old the oil is.
I have yet to try the Snickers bar. I can't seem to talk Frank into splitting one after eating a dessertless dinner up the street at Hank's!

I went to this place a few months ago and loved it! Great service, great food, beautiful space. And it was also my first time to try the fried Snickers bar...they should offer it in bite size pieces though :)

YIKES! Did you really associate this Dublin Chipper with "Britain" Say it ain't so!!! The chips are not so much like the ones in Ireland but remind me more of Five Guys fries. You are so right about the yummy sauces. Next time try the Batter Sausage too. Yummy.

The fish is fresh and awesome. The chips are unremarkable, but I'm not a chip person. THE FRIED BANANAS ARE TO DIE FOR.

If you have any history of heart disease, don't even bother eating here. It's decadently fried food and unashamedly so. But it's the best fried fish I've had since Ireland.

Having never been to Ireland, I don't feel qualified to comment on how authentic everything is, but Jason's descriptions are pretty much spot-on.

Does anyone know if they do their fries the same way every night? Ours were thick and definitely a bit on the oily and starchy sides. Though the greasiness compares with the fries at Five Guys, the style is VERY different - the cut/thickness, the lack of skin on Eamonn's fries, and the noticeable absence of the peanut oil flavor that punctuates Five Guys' fries all brought me back to the Jersey shore and some of the fries you can get on the boardwalk (usually crinkle-cut and highly salted).

Mike,
The fries are the same, but sometimes heavy. Usually, they are amazingly fresh and creamy on the inside. Sometimes, however, the frying process isn't spot on.

The Eammon's experience would be greatly enhanced with plates and real flatware. No food is tasty enough to overcome the displeasure of eating your meal from wax paper on a greasy table.