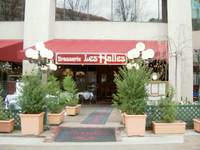 While all the country was caught up in Bourdain-mania (Bourdania?) a few years back, I was decidedly left behind. I missed the brief run of A Cook's Tour on the Food Network, and then No Reservations passed me right by. A friend asked me if I'd seen the Travel Channel special in which the intrepid chef was trapped in Beirut during the Israeli bombing of Lebanon; I feigned knowledge so as not to seem completely out of the loop.

By now most of the hype surrounding Chef Anthony Bourdain has died down, and of course that means I'm just getting into the guy. Having read A Cook's Tour and Kitchen Confidential in the past year, I was both excited and a bit taken aback when I learned that Les Halles, Tony's former digs, has a franchise right here in DC. I was nonplussed in that a) I'd assumed that the man I had begun to admire so would never helm a place that would spawn a chain, and b) I'd realized that I had walked by this place many times in the past several years and never put it all together. Ah well. 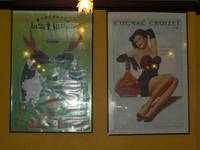 On a whim some friends and I made a reservation for Sunday brunch. We walked up in the wee hours of the weekend morning (i.e., 11:30) and made our entrance. On first blush, only one word can properly describe Les Halles: Cute. A red awning outside tops a quaint outdoor patio; inside, tchotchkes and posters of French-kissing cows grace the walls, and a handsome little bar is set off to the side — though it be a French restaurant, one could never give Les Halles grief for being stodgy! That said, the hostess was very polite and professional; she asked if she could check our coats, and promptly led us to our table. It was early for a Sunday and the place was dead. As we were saving room for an extraordinary brunch, we'd all skipped breakfast and were famished. I can safely say that come early afternoon we were all quite sated.

Since that first encounter I have visited Les Halles several times, and the best advice I can give is that regardless of your intended meal, make sure you come hungry. While the environment and the hype might scream "cheesy tourist rip-off," I assure you that this is not the case. Les Halles is one of the best bargains in the downtown area for the local Francophile, offering some on the most well priced French bistro treats I've found in the DC area.

On my second excursion, my girlfriend Eliza, our friend Matt, and I went by for dinner, and thinking ourselves up to the task we each ordered an appetizer. My escargot was impressive for the price paid ($7.50 for six); garlicy and oily as expected, but with a good deal more earthy goodness than your average midrange mollusk. My snails wound up the smallest of our indulgences, amongst Matt's very large portion of excellent country-style pate and Eliza's 1/2 pound of beef tartar, which is labeled on the menu as a "half portion," and modestly priced at $8.50. Suffice it to say that all three were, if not terribly innovative, delicious, well executed, and very generously apportioned.

As for entrees, the same general rule applies: don't expect to be surprised, and you won't be 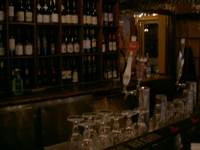 disappointed.  My hanger steak was simple but well prepared, if a bit rarer than the medium-rare I'd requested. Matt opted for the boeuf bearnaise and felt similarly; though a bit underdone the meat was good, and the bearnaise sauce "one of the best [he's] had." Hands down, Eliza's duck confit salad with truffled potatoes was the winner; the canard was rare and perfect, the frisee greens crisp, and the potatoes rich, but not overly truffled.

While the draft beers number a sad three, there is a good selection of bottles to be had, including several Belgian 750s at under 2x retail, which is pretty good for a bistro. The wines-by-the-glass list numbers around twenty, incorporating an eclectic selection of wine from such places as Provence, Mendoza, and New York, ranging in price from $6.50 to $20.00 a hit. I found the glasses offered to be a bit overpriced, so we took a look at the bottle list, which offers a thorough selection of wines from France and elsewhere at very reasonable prices. On Mondays Les Halles offers the entire list at half price, which leaves many of their wines at or below retail — if you ever wanted to drop the cash on a bottle of Dom or d'Yquem, you can do so at Les Halles without feeling fleeced. In the near future, they will be offering Chateau Mouton Rothschild 2001 — one of France's finest wines in that given vintage — by the ounce, allowing the layperson a taste of the best of the best. 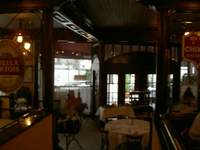 Service has been admittedly mixed; our brunch was a bit late in arriving, and our waiter at dinner was way over sat, and therefore not as attentive as we would have liked. Also, our bottle of Elisabeth Chambellan Chateauneuf du Pape 2005, while delicious and well priced, required an ice cube or two to reach potability. That said, I was well attended by the bartender on a recent quick lunch stop, and my beer was cold, so I will have to reserve final judgment on these points. Overall, I would place Les Halles in that rare and wonderful category of DC restaurants where a full dinner is just way to much, but a half meal will leave one full and thrilled. If you've visiting guests from less metropolitan areas, Les Halles is a great place to introduce them to French cuisine without intimidation or bank account depletion. Just don't eat the fish on Monday — though I'm sure the mussels are always good, Chef Bourdain just wouldn't approve.

thanks for the review. I just watched the episode of No Reservations in which Tony goes back to work a shift at Les Halles New York and Eric Ripert joins him. Very funny episode. I was left wondering why I never hear about or bothered to find and visit Les Halles DC. Thanks for the introduction.

Great article. My husband and I first went to the restaurant about 5 years ago and were turned off by 3 things: frustrating service, plastic wrap in cold food, and an indifferent manager. We went back several months later thinking that it must have been an off night, but we were disappointed again. We wrote to the main office in New York about our disappointment and to our happy surprise, the vp wrote back that they would look into it right away and a gift certificate to go back. A year later we finally ventured back and were happy to find that the food was greatly improved, as was the service. The duck is my favorite dish for dinner, although the sausage dish and mac+cheese are delicious as well. I've brought my sister to the restaurant for thick, satisfying hot chocolate and we've had group events there with great food and good service. They seem to have found who they are as a restaurant and are able to consistently pull it off. So far we have not been there on an off day. I hope that continues.

It's good to know about your Les Halles experience. My husband and I are big fans of Tony, but not for his food, which I'm sure he would even admit, is pretty standard stuff. We have generally preferred Bistrot du Coin, Montsouris, and Montmartre for classic bistro food because the food is great at those places and so is the atmosphere. We'll have to give Les Halles another shot. Thanks!

I've been going to Les Halles since it opened a long time ago and it has been my "go to" restaurant for most of that time. Prices are reasonable and the food reliable. They used to have a butcher shop right there but, alas, it lasted only a year.

While I'm happy you enjoyed Les Halles, I'm curious why you did not mention one of the mainstays of this establishment. The french fries are some of the best found anywhere.

Heh. Good point, Big Money. I guess that given that I wrote a good thousand words about the place without thinking of the fries says something about my feelings. Considering it now, they were definitely good (especially dipped in the mussel preparation), but never the highlight. If you go to Les Halles simply for the hype surrounding the fries, I feel you will be disappointed; however, they do accompany the main courses well.

I have a friend who I went with during Restaurant Week. The fries are the reason he keeps going back. Me, it's the meat. I'll admit, the last time I was there, about a month ago, the service was extremely slow.