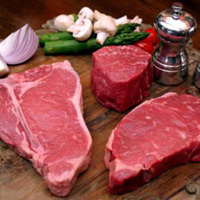 Heard around the DC Foodie blogosphere this week...from The List Are You On It, 100 King, in Alexandria's Old Town neighborhood, is now 100 Prime. Under new ownership, 100 Prime will be serving upscale steaks and seafood. Right across King Street, The Fish Market (written about by Rob Rutledge recently) is set to be bought next week, by the neighbor restaurant owner of Landini Bros. After 32 years as owner of The Fish Market, Glenda Giovanni is looking forward to retiring. Read the details about the changes on King Street in the article from The Alexandria Times.

Metrocurean tells us that Hank's Oyster Bar will be having an Oyster Fest on March 30, from 1 to 4 pm. For $65 per person, all you can eat oysters will include New Points and Rappahannocks from the East Coast, and a selection of beer. Tickets are available at Hank's Oyster Bar in Dupont Circle.

This week, a surprise 60th birthday party was thrown for Chef Michel Richard at CityZen restaurant. You can get the inside scoop from Sauce on the Side. Apparently, the Parkerhouse rolls were delicious, and plentiful.

The Washingtonian's Best Bites blog bring us an early look at Bice-the new restaurant occupying the space where the Old Homestead Steakhouse used to be. Most intriguing perhaps are the "purse holders" at each seat and the aperitivo happy hour, weekdays from 5-7 pm. Free Italian finger foods, half price drinks and occasional live music sounds like a great way to unwind after work.

Finally from today's Washington Post Weekend section, Eve Zibart reports on Big Buns Gourmet Grill, on Wilson Blvd. in Arlington, VA. At Big Buns, you can build your own burger from hamburger, chicken, mahi-mahi, or portabello mushrooms. From there, you choose your bun, cheese and toppings. They also serve a few beers.