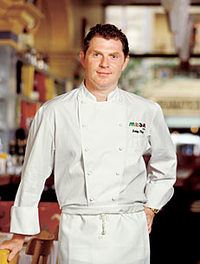 Heard around the DC Foodies blogosphere this week...a lot to talk about this week folks, so strap yourself in; we're in for a fun ride!

So, you read Mike Bober's post on DC Foodies about Granville Moore's this week. The "little kitchen that could" turns out the best moules and frites in DC, according to Chef Teddy Folkman. This week, Chef Folkman put his moules where his mouth is when he received a challenge from none other than Iron Chef Bobby Flay. On Tuesday, under the ruse that Food Network was filming a segment for "America Eats", Chef Folkman accepted a challenge from Chef Flay, for a Moule and Frites Throwdown.

Flay's show, "Throwdown with Bobby Flay", has Flay surprising unsuspecting cooks, bakers and chefs while they demonstrate making their signature dishes. Be it crab cakes, gingerbread houses, or macaroni and cheese, Flay does his homework and shows up ready to rumble. If, that is, his challenge is accepted.

Not only was Mike there, but the two judges for Throwdown Moules and Frites were none other than DCFoodies.com founder Jason Storch, and his wife Amy. When asked if he could reveal the results of the challenge, lest he face the wrath of the 5 point exploding heart technique, Jason responded that he could tell me, but then my internet would be cut off for the next 3 months or so. You can talk smack about my Momma, but don't cut off my internet.

The show is set to air sometime in May or June. I guess we'll all find out together. Check out Endless Simmer and Frozen Tropics for more of the inside scoop and photos.

Just in time for Spring, Indigo Landing, with its fabulous deck, reopened on Thursday, March 20th. Minus the Star Restaurant Group, Guests Services, Inc. is launching the latest incarnation of Indigo Landing with Executive Chef Ernesto Pabico. Look for entrees such as Hickory Roasted Prime Rib with a creamy horseradish sauce and natural au jus, which is prepared on a wood-fired grill from 100% Red Angus Beef raised in the U.S.A. Coconut Grilled Lobster, and Blue Crab Sliders on mini brioche with stone-ground mustard mayonnaise and Shaker Corn Relish also sound tempting and nod to the restaurant's waterfront location.  Live Jazz will fill the air on Wednesday evenings, and during Sunday Brunch.

Earlier, DC Foodies reported that Murky Coffee in Capital Hill was closed because of tax issues. Apparently, the worst case scenario is playing out, as the D.C. Office of Tax and Revenue has seized the operation. According to today's Washington Post Metro section, Murkey Coffee owes more than $427,000 in sales and franchise taxes. Owner Nick Cho disputes the amount and states that he owes about $200,000 at the D.C. site, and approximately $20,000 at the Virginia site. This is already fueling speculation and concern for the fate of the Clarendon branch, on local boards such as Don Rockwell.

On a much lighter note, Apples and Bananas reported this week that the fry plate is back at Palena, while Endless Simmer came up with a really fun list of "Americas Top 10 Drunk College Foods" for March Madness. Be sure to check it out and add your favorite hazed memories!