A Coffee Buzz: The Scoop on What's Become of Murky Coffee 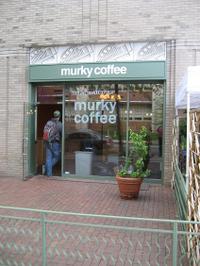 Like many people, DCFoodies.com has been following the situation surrounding Murky Coffee and its tax difficulties with some interest.  And although we promised not to mention it again for at least a week, there are some times when we learn things that are just too good to keep to ourselves.

Walking by Murky this afternoon, I noticed a panel truck parked outside and a pair of workers wheeling handcarts in and out of Murky's Eastern Market location at a steady pace.  I walked up to the truck and took a look inside, where I saw much of what endeared Murky to coffee lovers (and aspiring novelists) - the espresso machine, a large refrigerator, assorted tables and chairs.

As sad as I was to be witnessing this dismantling of a Sunday morning favorite, I had the presence of mind to introduce myself to the gentleman who appeared to be supervising the operation.  I asked him a few questions, to try to learn what I could about the future of Murky's equipment and the location itself.  Later on, when I came back to take some pictures, the truck was gone but an employee of the building was there and he helped to fill in some additional details. 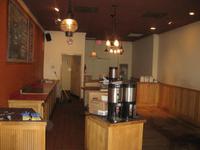 And if you're not sick of this story yet, here's what we know: 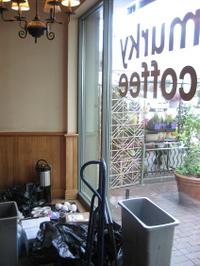 So what started out as a blow to small, local business has actually resulted in opportunities for two separate local businesses.  I, for one, think it's great to see Murky's equipment going not only to someone who is eager to get started, but who is also going to be expanding the District's coffee culture into yet another neighborhood.

And those of us who relied on Murky Coffee for our java fix on the way to work or after a trip to Eastern Market on the weekends will have to settle for Port City Java (a North Carolina-based chain with franchises in seven states, Costa Rica, Saudi Arabia and the District) or - gulp - one of the Big Boys (Dunkin' Donuts and Starbucks) who sit at either side of the entrance to Barracks Row on a direct sight-line from Murky's front door.

Thanks for keeping us posted. That was a fairly traumatizing event, it's good to know that someone local and caffeine-oriented will be taking their place soon

This news is new to me. Sad to see them go; felt good to get some decent coffee at a good price on the way into work, and it was exactly halfway along my walking commute. And, there were often cute women in there to take notice of or possibly chat with. Hopefully something local will go in there again, could care less about a chain there.

This is Great News!
blogged about at:
www.anacostianow.blogspot.com

What I really miss is the original Roasters on the Hill, which started in the space. Nothing like the smell of coffee being roasted on site!

It's not quite the same, but I would highly recommend checking out Sidamo Coffee and Tea on the 400 block of H Street, NE. They have a roaster on site and tend to do their roasting in the morning, so the aroma lingers. Although they focus on Ethiopian coffees, they carry a wide range of beans from Africa and the Caribbean. Their website is http://www.sidamocoffeeandtea.com/

I noticed the stuff was gone on my walk home from the Eastern Market Metro tonight, I'm glad to see it's being put to good use.

Also, co-sign on Sidamo; they're awesome and Kinfe and Mimi are two of the nicest people you will ever meet. Further east on H St. is Sova (www.sovadc.com) which also makes terrific coffee, you can't go wrong at either of those shops.

Although I miss Murky, I have to say Port City Java isn't as horrible as calling it a "chain" makes it sound. The super friendly people who work there always remember what my drink of choice is, even before i step up to order, there's tons of outdoor seating, they have food and a decent amount of tables and a few comfortable chairs. It's no murky, sure, but it's a pretty good replacement for the time being.

Hill Rat - Glad you mentioned Sova. Frank Hankins has done a great job getting things going over there, and now that their wine bar is open it makes for a terrific complement to the various theme bars and restaurants in the Atlas District. It should be noted that Frank will definitely be carrying on the Murky tradition of commitment to quality coffee - he actually apprenticed at Murky's Clarendon location for four months before Sova was up and running.

SG - You're absolutely right...as far as chains go, Port City is one of the better options (and the best in that neighborhood). I've enjoyed what I've had there on plenty of occasions.

Whether consciously or unconsciously, it seems like Near Northeast has become quite a focal point for coffee culture: In addition to the aforementioned Sidamo and Sova, Ebenezer's Coffee is doing well at 2nd and F, NE, and Jacob's Coffee has been open at 8th and D, NE, for longer than any of the others.

For my money, each has its own unique vibe:

Sova - Murky-like commitment to the brew and the wine bar make this a great late-night hangout and an emerging 'destination.'

Ebenezer's - Although they are owned and operated by the National Community Church, they have the most 'coffeehouse' vibe of the bunch - lots of folks on laptops make it an all-day affair while SEC employees and others from the nearby area come in for take-out. They have a great space downstairs for private events, small concerts, poetry readings, etc.

Jacob's - The oldest of the four, the interior isn't especially conducive to lengthy stays. They do a pretty expansive menu, but everything has a bit of a formulaic feel - Seattle's Best coffee from thermal containers is the mental image I carry with me.