Few things can round out a dinner party or take the chill out of a gloomy day better than a perfectly executed baked treat. Similarly, only the rarest of kitchen mishaps can elicit the same howls of frustration as a dessert gone awry – the glaze that boiled into hard candy, the uneven cake, the mysterious metallic flavor you can’t quite pin down. The fickleness of baking can be enough to drive even the most confident cooks from their mixers. 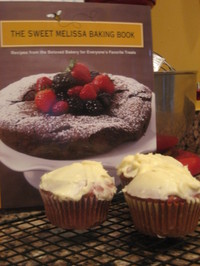 an array of fun, sweet treats. Her conversational style guides the reader through the book, providing anecdotal history on family traditions and customer favorites from her Brooklyn patisseries. Many recipes include suggestions for storage, cutting like a pro and serving ideas. Most importantly, all of the recipes can be executed with equipment found in a reasonably stocked kitchen.

Although Murphy’s style focuses on simple recipes executed well, her options turn up the volume on classic favorites. Murphy’s Guinness gingerbread, which I baked for a pregnant friend on St. Patrick’s Day so she could keep her stout tradition alive, debuted as a rich, dense cake. The use of high quality chocolate and Guinness laid an earthy platform and the surprising addition of white pepper gave our tongues an extra kick. Fair warning: this recipe requires you to simmer the stout in a saucepan for a few minutes, causing your kitchen to smell like a frat house on Sunday morning. Luckily the baking bread pushes this aside with clouds of delicious goodness once it’s in the oven. 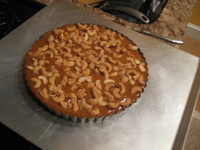 The butterscotch cashew bars were a first for me and I wasn’t sure what to expect. This turned out to be a dish that is high on presentation but fairly low on effort. Although the recipe calls for a homemade shortbread crust, this is remarkably easy as it’s really a measure-and-dump effort with your standing mixer doing the leg work. While the crust bakes, you can get started on the butterscotch caramel which essentially means “put this on your stove and let it melt.” Once it is appropriately gooey, pour the contents over the now-baked crust. Sprinkle cashews on top and toss the whole thing back into the oven for 5 minutes: et voila! A beautiful treat that looks store-ready. The saltiness and crunch of the cashews and crust is a perfect balance to the sweetness of the butterscotch. It was so simple I almost felt guilty for accepting compliments when I brought it to work. (Almost.) 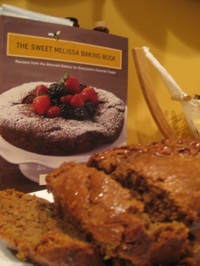 le of go-to quick breads. Can anything beat the smell of a great bread rising in your oven? Murphy’s sweet potato bread is no exception. The generous use of spices gave our entire apartment a heavenly, seasonal perfume that took me back to fall afternoons and cozy sweaters. The bread arrived with enough softness and spring to double as a pillow.

Murphy’s red velvet cake with cream cheese was the only disappointment I encountered. Maybe I set my hopes too high; I’d been obsessed with red velvet since eating it in cupcake form in New York. I tried to replicate it here with Murphy’s recipe but something fell short. The batter, an amazingly rich concoction with cocoa, cinnamon and buttermilk, was good enough to eat on its own with a chilled glass of milk (I say this with confidence since I ate as much batter as I baked). Unfortunately, the batter lost its depth in the baking process and the decadent flavors faded to the background in the final product. The addition of the frosting did not help – its over-the-top sweetness screamed over the cupcakes and overwhelmed the flavors.

Overall I’m pleased to have Sweet Melissa’s Baking Book in my arsenal. She has dozens of other recipes I’m itching to try. An entire section dedicated to baking with fresh fruit which will surely fuel my farmer’s market trips this summer and her final section highlighting favorite treats to share as gifts will certainly be stained and dog-eared by mid-December.

As the lucky beneficiary of Elizabeth's baking, I can also vouch for the flavor of the butterscotch cashew bars and the sweet potato bread (which tasted similar to pumpkin bread but somehow more earthy).

I definitely enjoyed the recipes we tried, and I'm looking forward to more (like the hazelnut madeleines Elizabeth made this week).

I recently got this cookbook...it truly is excellent...well written so it is easy to follow. The Carmel Apple Pie and the Hazelnut Raspberry cake were delicious!