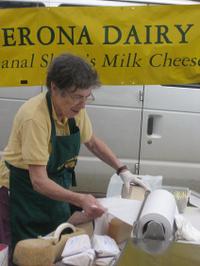 For more than a dozen years now, Dr. Pat Elliott has been crafting a range of quality, artisanal sheep's milk cheeses just a few hours' drive from Washington in Rapidan, Virginia.  Until recently, these delicious cheeses from Everona Dairy have been hard to find for most D.C. Foodies, as they were sold primarily on-site and at Farmers' Markets in Charlottesville.  Those who were able to chase down a wedge of Stony Man or Piedmont at Arrowine or another local shop were rewarded with cheeses that offer deep, nutty flavors; rich, buttery color and a texture that progresses from firm to pliant as it warms.

Thankfully, this month has seen a welcome addition to the lineups at the Thursday afternoon Penn Quarter market and the Sunday morning Dupont Circle market.  Dr. Elliott and her staff have added these two FreshFarm Markets to their weekly rounds, giving us the chance to try their full range of cheeses direct from the source. And what a range it is!  In addition to the mainstays (Piedmont and Stony Man), Everona Dairy produces a baby Swiss-style cheese, a wine-soaked cheese they call Pride of Bacchus and a wide range of what could be considered 'infusions' -- varieties of Piedmont featuring add-ins like chives and dill, vegetable ash (for the 'Marble' variety), cracked black pepper, and even sun-dried tomatoes.  In each case, the flavors of the additions are immediately noticeable, and most harmonize easily with the smooth flavor of the Piedmont.  The Tomato Torta caught me a bit off guard, but a second tasting helped me appreciate the surprisingly tasty combination. 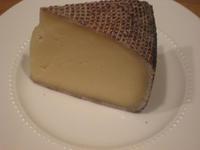 On my first visit, I decided to branch out a bit and I purchased a wedge of the Pride of Bacchus.  Unlike softer, washed-rind cheeses, this one lacks a pungent aroma and instead offers a vaguely wine-like nose...like smelling the inside of a retired barrel that had been used for aging.  The cheese itself is dense and snow-white, looking and tasting a lot like an aged Parmesan (but without the hard, crumbly texture).  Tasting the rind, I was surprised to find some flavorful notes mingled with the normal earthiness, yet you wouldn't be missing out if you passed on the rind altogether.  A subsequent visit resulted in the purchase of a section of the Marbled Piedmont, and the vegetable ash served to give the normally nutty Piedmont an earthier flavor.  Its appearance reminded me a lot of Morbier, the soft French cheese with its own layer of ash in the middle, but its taste was more like a Manchego. 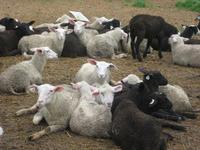 So how does a rural doctor end up running a dairy that produces more than 4 tons of cheese a year?  She buys a dog, of course!  As the story goes, Dr. Elliott purchased a border collie pup on a whim back in 1992, and she soon found that she needed something for the energetic dog to do.  Since collies are working dogs, she decided to buy some sheep.  Sheep led to milk, milk led to cheese, and soon enough Everona Dairy was producing award-winning cheeses made from the milk produced by more than 100 Friesians and other sheep she raises on site.

Though none of her cheeses are inexpensive (wedges are priced by weight and tend to run in the $12 to $18 range for 1/4 to 1/3 of a pound), Dr. Elliott's passion and the story behind her entry into the world of cheesemaking stand out and make Everona Dairy a local producer I'm happy to support.

It was great to meet Dr. Elliott at Dupont. The cracked pepper piedmont is my favorite. Cheesetique carries her cheeses, if you need a fix between market days.