Being so rich in viticultural treasures, I felt that the Orange county region requires a little bit more attention. To this end, continuing in last week's vein, I have here outlined my experiences at a couple more of the area's fine wineries.

A few miles up Route 22 as it winds its way from Charlottesville, just over the border into Albemarle County, signs pop up in the green pastures for Keswick Winery. The winery is set a good ways off the road up a long and winding path, and our drive up said path was like being transported into some pastoral poem. To the left, farm dogs frolicked amongst the vines, while rabbits popped their heads in and out of their warrens; to the right, gnarled fruit trees stood stark in the tall grass, and on an a small and swampy looking pond, a Great Blue Heron made a majestic marine landing. Hand to God.

Up on a nearby hill, set behind a copse of trees, a large barn-like structure houses the very modern tasting room. Inside, a large L-shaped tasting bar dominates the large, dark-wood furnished room, otherwise occupied with books, T-shirts, and other tasting room knickknacks. Near the door is a fascinating little glass table displaying artifacts uncovered during the vineyards' planting.

Being rather early on a Sunday the place was empty, so we were eagerly greeted by the two young women behind the bar, probably happy for the diversion. We chatted pleasantly as we paid our $8 and sampled the ten or so wines being offered that morning, most sourced exclusively from the surrounding 40 acre Edgewood Estate Vineyard. The 2006 Rose was lovely -- light, with just a hint of sweetness on the raspberry fruit palate. By and large the whites did not impress me, but it was interesting to see that Keswick grows the Spanish varietal Verdejo -- several VA wineries have been experimenting with this suddenly popular varietal; expect to see many more in the near future. The reds were solid, if a bit lower in acidity than I would have liked. The 2006 Norton was rather impressive, though, showing a classic profile of burnt fruit and earth, a full body, and none of that grapey or foxy quality for which the grape has been derided. We picked up two bottles for $20 apiece.

While there is not much in the way of food to be had, Keswick makes some good wines that you may consume in undeniably gorgeous environs. If you find yourself in the neighborhood, pack a picnic and pay a visit.

I have only visited this winery once, and briefly, but I certainly plan on visiting again. It was kind of late on a Sunday, and after a rather lengthy tasting at Barboursville, I thought it would be a good idea to see what Horton was about, being only a few miles up the road. As it was threatening rain and about 20 minutes till closing, my companions disagreed. After a bit of whining, I got my way.

We pulled up to the tasting room just as the drenching rain began, and rushed under useless umbrellas to the welcoming Tudor style miniature castle. Inside, the tile floored, vaulted ceilinged room was a bustle of activity, with four tasters running back and forth serving some 20 or so guests. I soon learned what all the commotion was about: Horton offers their entire portfolio, 40 wines strong, open for tasting, free of charge.

With only about 15 minutes to taste and so much on hand, we quickly moved through a few solidly made  fruit wines and then went for the dry reds. The Stonecastle Red, an unusual blend of French and Portuguese varietals, was a pleasant surprise — lots of gamey flavors and depth of fruit given the light body and $12 price tag. The Cotes d'Orange, a cleverly named Cotes du Rhone inspired blend was similarly appealing, though a bit more tannic than its brother. The Malbec, an almost unheard of grape to see at a Virginia winery, was much lighter than its South American counterparts, but satisfyingly fruity, 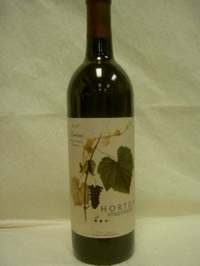 and also well priced at about $15. Though we skipped it on that particular outing, Horton's Norton (pictured right) is also perennially solid for under $15, as well it should be, being the first commercially released example since prohibition.

I could go on, but honestly, we were in such a rush and I consumed so much wine that my memory is a bit fuzzy. Suffice it to say that a winery that offers such a breadth of esoteric wines, and is willing to let the public try them on the house, is a bit of an anomaly. I have no doubt that a good number of the wines are mediocre at best — that said, the best way to learn about wines is to taste as many as possible, and Horton offers a unique opportunity to get a good number under your belt. Though, even if you are spitting, a designated driver might be in order.

Again, please chime in with your own experiences at these and other Virginia wineries. Cheers, and keep drinking locally!

Very funny! My wife and I also hit Keswick on a recent Sunday morning on our way back from Charlottesville. I was intrigued by the Amish farmers' cheese that they were sampling, but not enough so to warrant the price they were asking - we left without taking any home with us.

Excellent, I'm so glad to see Orange County vineyard getting more press. They really are fabulous, and right in our own backyard. I would also recommend Del Fosse (great wine and great cheese plates, though a little pricy)and White Halln (really fun, down-to-earth wines). And, though it's a shlep from Charlottesville, D.C. Foodies on a wine-tasting weekend in central Virginia should not miss out on dinner at the Joshua Wilton House in Harrisonburg. In my opinion, they may just beat out even the upper tier D.C. restaurants in terms of quality-for-price ratio. Lots of care in terms of ingredient selection, yet with a distinct sense of fun thrown in. Definitely worth a foodie weekend trip!