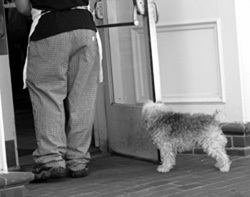 Heard around the D.C. Foodies blogosphere this week...Just in case you need last minute dining options for Mother's Day this Sunday, you can check out A Life of Spice's list of D.C. Mother's Day Brunches. For those of you in the Old Dominion, you can see Northern Virginia Magazine's list, which food critic Warren Rojas linked to in his weekly Grill Warren food chat.

There will be a Food and Wine Festival at the National Harbor this May 17th & 18th. The festival benefits Share Our Strength. Guest speakers at the event will include Chef Michel Richard and local winner of Hell's Kitchen, season 3, Chef Rock.

In Tuesday's Washingtonian chat, Todd Kliman began with an informative Word of Mouth, reporting on the New Chinatown of North Rockville. Kliman highlighted Michael's Noodles and their "comforting chicken rice dish from the island of Hainan, off the coast of China". Accompanied by chili and ginger dipping sauces, this dish headlines the Chef's Suggestions.

Later in the chat, when asked what the next big trend will be, Kliman responded that he would like to see noodle bars, sushi bars which fly in fish from Japan, and a "real-deal deli".

While we are waiting for the real-deal to arrive in D.C., you can check out Tim Carman's article "Sandwich Bored". In it, Carman explores sandwiches, subs, gyros and a panini from Marchone's in Wheaton, where a Philadelphia Amoroso roll made Carman gush-over a sandwich. Hey, it happens.

Carman also launched a periodic feature, Fridge Festival, in his Young and Hungry column. In it, he invites a local chef to peer into the "skank hole" that is your average pantry, where food languishes unused, until it meets it's ultimate destination of the garbage pail or your dog's unsuspecting gullet. Bravely, Chef Todd Gray of Equinox accepted the inaugural challenge in Carman's own kitchen, and made the culinary equivalent of a silk purse out of a sow's ear. Perhaps I should say, a sausage out of a sow's ear.

Speaking of Chef Gray, recently Cork and Knife's Chip Griffin sat down with him to discuss his local and seasonal cooking philosophy, aging steak (did you know that steak gets a nutty nose scent as it ages?), and his détente with food bloggers.

We don't bite! Much.