In just over 12 hours, Bravo's fourth season of Top Chef will come to a close and a new winner will be revealed.  And although many DC Foodies will watch eagerly to see if Lisa gets her long-awaited comeuppance, the real excitement for Washington lies less in what is yet to come than in what has already come of this season - the emergence of Spike Mendelsohn as a celebrity chef on the national stage.  Even before the show had begun taping last year, Spike and his family were working to turn a Pennsylvania Avenue address on Capitol Hill into Good Stuff Eatery, a restaurant that will offer comfort food favorites like burgers, fries and milkshakes using fresh, local ingredients.  Last night, Elizabeth and I had the opportunity to sit down and talk with Spike and his General Manager/housemate/longtime partner-in-crime Mike Colletti over mussels and frites at Granville Moore's.  I have to apologize to Colletti in advance, as I've tended to focus on Spike's comments in this writeup at the expense of our broader conversation.  For more of our conversation, check out Elizabeth's post on Capital Spice.

So did Spike give us any spoilers for tonight's finale?  We wish!  Let's just say that he would have no trouble securing a job as a press secretary on the Hill...he refused to give away any of the juicy details, but he was happy to tell us all about his experiences and to give us a sneak peek at what we can expect when Good Stuff Eatery opens later this month.

Spike told us about his audition process, which was more arduous than most of us might expect.  He was actually a finalist for Season 3, when he was invited to Los Angeles as one of thirty potential cheftestants before missing the final cut.  But he submitted a second application video (shot by Colletti) when Season 4 rolled around and this time he struck gold. 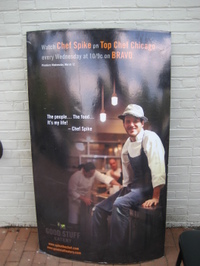 It becomes very clear when talking to Spike that he represents a new kind of Top Chef contestant - one who recognizes the inherent marketability of competing and who continues to work with Bravo to develop his 'brand.'  He went into the show eager to demonstrate his own style and to make sure he stood out from the crowd, regardless of the final outcome.  But he gives the show a lot of credit for the rigors they put the contestants through, calling it "similar to a French apprenticeship, where they give you a peeler on your first day and you have to work your way up."

The hats, the outsized personality...though he was always true to himself, he was thinking about how his actions would play on the air.  As a result, he has no complaints about how he was represented by the producers - in fact, he's pretty pleased with them.  He is proud of the fact that he has had more contact with Bravo since his episodes were filmed than any other contestant in the history of the show.  And although he couldn't say anything definite, he seemed pretty certain that Top Chef Season 5 would be filmed in New York City or New Orleans...do with that knowledge what you will.

Does Spike have a favorite for tonight's finale?  His positive comments about Stephanie's 'simple, soulful' approach and Richard's 'carefully considered' and 'focused' menus suggest that he would have been happy with either one as the winner, though he admitted to feeling like he worked with the best of the final four when acting as Richard's sous chef in last week's episode. 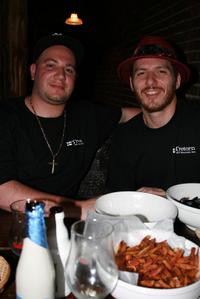 Now that he has settled down here in Washington, Spike is eager to become an active part of the local restaurant scene.  Though he wouldn't go into details, he suggested that several local chefs have submitted strong applications for Top Chef 5 and when he says that at least one of them has a very good chance of making it on the show, he seems to feel a sense of local pride.  He brushes off the machismo of one particularly aggressive local applicant with aplomb.  Spike admits to some favorites on the local restaurant scene, as well.  Even before Jose Andres guest judged and complimented him for his shrewd performance in Restaurant Wars, Spike was an early fan of Zaytinya.  These days, he adds Michel Richard's Central to his growing list of favorites, praising Richard for his smart approach to growing his brand and "really getting into every aspect of it as a chef.  You can see it in his hands and you can tell it in the food."

Following his sister (who handles marketing for Good Stuff) and his parents to town, Spike is focused on launching a number of Good Stuff Eateries throughout Washington - and eventually even further afield.  Even before the paint has dried at their Capitol Hill location, they are close to locking in another venue on Adams Morgan's busy 18th Street corridor.  He has created a restaurant group, Sunnyside Group LLC, with an eye toward several other concepts that reflect his prior experience - an Asian establishment whose primary influence will be Vietnamese cuisine and a Mediterranean restaurant showcasing his Greek heritage are projects he is eager to tackle.

But first Good Stuff needs to take off on Capitol Hill, which shouldn't be any problem at all if the food lives up to the impressive billing Mike and Spike give it.  They can't help but smile as they talk about the process for making their fries, and their enthusiasm for aged Kingston potatoes that result in fries with a mashed-potato like interior is contagious.  Even with two full bowls of Granville Moore's delicious frites in front of us, I found myself eagerly visualizing what they were describing.

Their burgers and salads sound equally appetizing, catering to a wide range of tastes with flavorful options that include the standard steakhouse burger and wedge salads, but quickly veer into uncharted territory with a spicy banh mi style burger and a mushroom burger that finds two kinds of cheese melted between two portobello mushroom caps.  Though they will provide ketchup and mustard for those who deem them inherent to any good burger, the guys were quick to point out that their burgers will feature a special sauce that should render lesser condiments unnecessary.  Vinegar and homemade mayonnaises for the fries will also be offered.  And hand-spun milkshakes made from fresh custard made on site daily will help to wash it all down.

Good Stuff Eatery will have seating for roughly 80 customers at a time, with outdoor space and a communal table that seats at least 12 upstairs.  Food will be made to order, so it will be interesting to see how they cope with the double-whammy of Spike's celebrity and the typical crush of Hill staffers on their lunch breaks during the day.

We won't have to wait long to find out - Good Stuff is anticipating an opening before the end of June, and you can bet that people will be lined up out the door from Day One to catch a glimpse of Spike and enjoy their burgers, fries and shakes (and salads).

Spike is sexy, is he single?

I'm married and male, so I'm not exactly looking...

Why not stop in and ask him yourself? :-)

We decided to try it out yesterday after noon. Let me just say if you like very greasy burgers (ordered Good Stuff Melt) that are overcooked and over seasoned & very very greasy fries (ordered Village fries)& onion rings (it was mostly all batter, I was like where are the onions) then maybe you will like Good Stuff. The mayo bar was nothing to talk about. The strawberry milkshake was nothing special, I guess maybe it was ok at the most. I'm just glad that we didn't have to wait in a long line, which would have made everything even more disappointing. Total cost for burger, fries, milk shake & onion rings $19.85.
I think he's caught up in all the hype going from Top Chef to restaurant owner. He should really concentrate on making sure what he is serving is actually "Good Stuff".

Sorry to hear that, JQ.

I've been two or three times now, and thankfully have not had an overcooked burger yet. I tend to stick with the basic fries instead of the Village Fries (too much rosemary for my taste), but they haven't struck me as especially greasy.

The mayo bar has changed - originally envisioned as a dispensary system, the realities of the volume of business they're doing have necessitated the single-serving cups being pre-set.

I've enjoyed my visits so far, but it's still REALLY early for people to be making final judgments on this place - positive or negative. They've only been open two weeks now. I want to give them some time to settle into a rhythm before I make up my mind for good.

I just went there tonight and was pleasantly surprised. The man puts out a decent burger, but you can't get out of there for under $20 if you order a burger, side, and a shake. That's Washington, though, I suppose. I had the regular fries and they were great -- my dining companion had the other ones and wasn't thrilled -- too much rosemary.

I went there and was thoroughly dissapointed. First the cashier was unattentive. I asked for a chocolate shake and she said they didn't have those, then proceeded to read me the list of shakes in which she listed "chocolate". I then replaced my order for said shake.
We ordered 2 bacon cheeseburgers and onion rings with the shake to go.
We ended up with 1 bacon cheeseburger, 1 turkey burger and fries with the shake.
I think if I had wanted the "Good Stuff" I should have probably gone next door.

Next door? Would that be Cosi or Zack's Taverna?

Either way, you probably wouldn't have been able to get much in the way of what you were looking for at Good Stuff.

Sorry you had such a disappointing experience, though. Sounds like you may have caught them on a very off day.

My suggestion - call them and let them know what happened. Restaurants need to hear when things go so wrong like this.

Don't order the turkey burger, unless you like it rare. I order two turkey burgers and both of them were dark on the outside and very pink on the inside. Needless to say...they weren't done. The cashier did not want to give my receipt and money back...And I'm 6 months pregnant! Nevertheless, I will never eat at GoodStuffEatery again!!!

do not live in DC have never been to goodstuffeatery. but i do have to comment on the fact that i worked with a very awesome guy resembling spike in ybor city florida. not just looks but attitude. pretty sure thats the guy i know and he deserves all the great things that have come to his life. it was an experiance knowing spike for the short time i did.