« The Italian Store: Mangia! | Main | Weekly Blog Round Up »

Infusing Gin for Fun and Profit

I am an unapologetic fan of gin; consider me outed. Fortunately, there are more and more like me everyday, reveling in a world of colorful spices, eschewing the dull and colorless life of the vodka drinker. The tables are turning, and "mother's ruin" is quickly gaining ground on vodka, which has dominated the American cocktail scene for decades. As gin once again takes its rightful place as King of the White Spirits, we should expect any number of crazy infusions to make their way to the market; just as James Bond's martini gave way over time to the Appletini, I've no doubt that ambitious gin producers will be chomping at the bit release their own freaks of mixology.

With an eye towards influencing the future of the drinking sciences, I decided to conduct a little experiment. Everyone knows any fruit-infused gin is a doomed and foolish endeavor (remember "Beefeater Wet," endorsed by Ms. Britney Spears? Neither does anyone else). Any idiot can tell you that herb-infused gin is the wave of the future, and I am gonna ride that wave all the way to the bank, "Point Break" style. Using about two tablespoons of fresh, chopped herbs, I infused four three-ounce samples of Aviation Gin for 36 hours, then prepped a test Gin and Tonic for each using Fever-Tree Tonic Water, in proportions of two to one. Below are my results; consider the patent pending.

Aviation is a great gin in its own right, produced from 100% rye in the Pacific Northwest. Graced with just the right blend of juniper, cardamom, coriander, lavender, anise, sarsaparilla, and orange peel, the gin is spicy and dry, not fruity like Tanqueray. The licorice flavor of anise is definitely the main note in my control G&T, and the finish is refreshingly dry and biting, with an interesting earthy note that blend's well with the Fever Tree's ample quinine. Can I possibly improve on this brilliant classic cocktail?

The lightest of all my samples, the rosemary gin poured a pale yellow-gold, turning, well, urine colored when combined with the tonic. The savory musk of the herb completely overshadowed the once dominate Anise on the nose, and the beverage smelled quite nearly salty. The rosemary definitely brought out the earthy elements present in the base beverage, as it will in a fine Pinot Noir or Chateauneuf-du-Pape. The flavors become remarkably citrusy upon swallowing, after which a striking puckering sensation gripped my palate. All in all, an interesting experiment, and were it not for scientific method, I'd have mixed this in a dirty martini and happily sipped the results.

The mint-infused sample was the darkest of the lot, a rich brownish yellow, which, combined with tonic, bore a striking resemblance to ginger ale. While the gin on its own smelled quite distinctly of mint, the odor of my cocktail was surprisingly mute -- just a faint whiff of menthol along with a bit of moist earth (wet Newports, anyone?). On the palate, this stuff was straight up Wrigley's Spearmint Gum, if just a tad less sweet. The finish was far sweeter, and the bitter Quinine combined with the mint flavor to leave my palate with an odd chalky sensation-- again, not unlike a dry stick of gum. This one is a must have for you pack-a-day Wrigley's chewers (you know who you are). 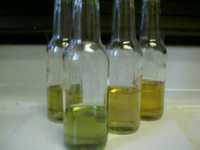 The only sample to turn remotely green, the basil sample was chartreuse in color, and became iridescent yellow in the cocktail. I was taken aback when, upon first sniffing the glass, my initial impression was that it smelled like seafood. Further examination proved to me that my beverage smelled very much like Old Bay. Through some amazing confluence of flavors, I wound up with a crab bake in a glass! On the palate the flavors prove uncannily similar, if much more sweet than salty, and not at all spicy in the cayenne sense. The finish proved markedly dryer than I'd imagined, and the aftertaste was all celery and  bell pepper. A fascinating sample, and the only one I drank to the bottom of the glass.

(Note: I got this herb from our CSA farm share. When I asked as to the herb's uses, our supplier replied "Use it to keep moths out of your closet. It is not a food." Just wanted to put that out there.)

This sample was also golden brown in the bottle, but took on an eerie green glow when mixed with the tonic. The nose was an amalgam of anise, wet bark, and a decidedly astringent chemical agent. The flavors are hard to separate for lack of desire to keep the drink in your mouth; through sheer force of will I was able to pick up nuances of dandelion leaves, lemon, and dirty sugar cane. Immediately upon swallowing, my back palate was assaulted by a combination of mouldering mushrooms and medicinal bitterness, causing uncontrollable grimacing. Shortly thereafter, the color mauve set firmly in my eardrums, which would have been intolerable but for the dancing gnomes and a lovely foot rub from Richard Nixon (Tricky Dick has some magic fingers!).

No, but seriously, I have tasted absinthe, and while it was by no means appealing, this was worse. If you do happen upon this herb, best use it to protect your cardigans, as those gnomes had absolutely no rhythm, anyway, and Mr. Nixon's advances quickly turned uncouth.

While not as obviously appealing as, say, Green Apple Smirnoff or Stoli Razz, herb-infused gin has a certain intellectual appeal, offering up unexpected flavors for the adventurous drinker. Try some experiments yourselves, but remember whom to credit if Bombay comes a'callin. Now go away, Daddy has a headache and needs a nap.

Gotta know... where in the area did you find Fever Tree? A chef friend from SF told me about earlier in the year, but I couldn't find anywhere....

Great stuff, isn't it? Yeah, we've got it at the Wine Specialist, (21st and M NW), too. Fever Tree is now distributed by one of the area's bigger wine purveyors, so hopefully we'll be seeing it pop up in more places.

Since Gin is just infused vodka, could you get away with just infusing some vodka? Do the gin flavor stick around, or are they overpowered?

Intriguing. Just out of curiosity, why gin, which is already infused with various flavors?

Vodka is a much simpler base to get an infused drink to taste the way you want...try lovage and cucumber and you'll be hooked...

and what the hell kind of basil makes gin taste like crabs?