There's certainly no shortage of Virginia and Maryland cheesemakers whose products can be found at farmers' markets and shops throughout Washington.  But I'm hard-pressed to think of a single Virginia cheese more widely available or well-known than Meadow Creek Dairy's Grayson.  For almost 30 years, these folks down in Galax, Virginia (along the North Carolina border off the Blue Ridge Parkway) have been making cheese from raw Jersey cows' milk, and the results speak for themselves.

Grayson is Meadow Creek's most popular and recognizable offering, as well as their most decorated.  This washed-rind cheese is usually compared to Tallegio with good reason - both are pungent, semi-soft cheeses that are shaped into five-pound (give or take) square 'rounds' before they are washed in a brine solution that gives them the telltale orange surface that cheeselovers the world over recognize as an indication of fragrant goodness.  Like Tallegio, Grayson's flavor can best be described as nutty or earthy, though I've heard it referred to as a 'beefy' cheese on more than one occasion. 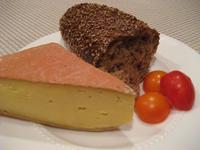 As it comes to room temperature, you can expect the aroma of Grayson to increase in intensity along with the flavor, which becomes more complex and even develops a mildly sweet note.  The beautiful golden-yellow interior softens and takes on a silky texture that yields easily to a knife but holds its shape without melting.  But be prepared for that pungent nose - it is as much a part of the Grayson experience as the flavor, and if you don't care for 'stinky' cheeses the aroma may make it hard for you to enjoy the great taste.

When serving Grayson, I like to pair it with things that acknowledge and complement its assertive qualities - acidic items like tomatoes or cornichons and whole-grain breads both sweet and savory.  Though the cheese never softens to the point where it can be spread, a small slice atop a hunk of bread with some mustard or a bit of tomato makes for an amazingly satisfying little bite.  Saxelby Cheesemonger, in the Essex Street Market, even goes so far as to cook up grilled Grayson sandwiches that pair the cheese with bread & butter pickles for another savory treat. 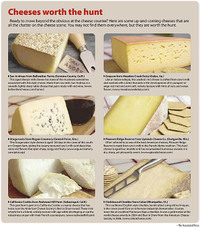 For their efforts in the creation of quality artisanal cheeses, Meadow Creek Dairy (and, more often than not, Grayson) has been honored by numerous food authorities and publications.  They are listed as one of the top 10 cow's milk cheeses in the South by the Southern Foodways Alliance, and they have been selected for inclusion in the Slow Foods USA 'Ark of Taste' for their use of raw, grass-fed Jersey cows' milk in their products.  An Associated Press article highlighting American artisanal cheeses identified Grayson as one of six "cheeses worth the hunt," and one of only two from the East Coast (the other being Cabot's Clothbound Cheddar from Montpelier, Vermont).

Unlike most of our local cheese treasures, Grayson can be found across the country when it's in season (because Meadow Creek's cows are primarily grass-fed using sustainable farming methods, their cheeses are only made during a production season that runs from April to November).  The Meadow Creek website currently lists shops and restaurants in 21 states where Grayson can be purchased, and they ship their cheese anywhere in the country (except Hawaii) via UPS.  A Google search for Grayson cheese turns up listings from Artisanal and Murray's in New York, two of the foremost cheese purveyors on the East Coast.  It also turns up a blog entry regarding a boy named Grayson's visit to Chuck E. Cheese, but that's neither here nor there.

Be aware that prices can vary widely depending on where you buy your Grayson.  Although it is stocked by Arrowine, Cheesetique, Bower's Fancy Dairy Products, and Whole Foods, they can't seem to agree on a retail point.  In this case, Whole Foods is the best buy, selling it for $16.99 per pound, which is at least $1.50 cheaper than any of the others I surveyed.  Because a little goes a long way, Grayson offers a great value for the money - it's just not for delicate noses!

Hi there!
First of all, glad to hear you're enjoying the cheese.
A minor quibble -- Rick and Helen (the owners) have been dairying for almost 30 years, but have only been making cheese since 1998.

In response to the comment by Me, there are courses being offered by a number of specialty cheese shops. (In DC, the one that comes to mind first is Cowgirl Creamery at 9th and F, or just google the name). Also, there is a fabulous booklet called "Taste Comté Cheese." Its focus is, understandably, on Comté, but we've found it an excellent resource when applied to other cheeses as well. The only problem is, it's not easily available even from www.comte.com. You might want to try, again, your local specialty cheese shop.

Dan - Thanks for stopping by to clear that up. Sorry for the confusion. Grayson is definitely a favorite around here, so keep up the good work!

Me - The only recommendations I have about tasting cheese are as follows:

1. DEFINITELY allow the cheese to come to room temperature before tasting. You'll miss out on a lot of the flavors if you try to taste while it's cold.

2. DO NOT try to taste too many different cheeses at once, even if they're all the same kind (all blues, all bries, etc.). After a while all the differences will start to blend and it will be much harder to distinguish favorites or specific flavors.

3. Try a bit of the cheese by itself, without any accompaniments. After you've done that, try it with a fairly neutral complement, like bread or a water cracker. Only after you've got a good idea of the basic characteristics of the cheese should you try to pair it with complementary flavors like dried fruit, nuts, or pickles.

Look for predominant flavors like salt, cream or caramel and secondary traits like nuttiness, tang, earthiness (funkiness), and dryness. But certainly let your own palate tell you what you think - don't take others' word for it.