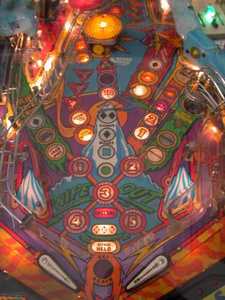 Heard around the DC Foodies blogosphere this week...Just in case you've been living under a rock on the dark side of the moon this past week, I'd like to fill you in on the latest DC (Arlington actually) scandal. No, there is no blue dress, cigar or little black book involved. That's right. Not sex-coffee.

Our first mention today is about a little brouhaha turned tempest in a teapot involving one Murky Coffee patron, almost denied his espresso and ice, who after an hour steeping in his anger over the situation, decided to deface our legal tender with a profanity-laced message, leaving it in the tip jar. Said patron proceeded to blog about his misadventure, and the story pinged around the internet like a pinball on acid, prompting a tour de force response from Murky's owner, involving genital mutilation.

In restaurant closing news, two more establishments can be added to the list this week. The first is Merkado in Logan Circle. It will close on August 24 and reopen as Commissary. Next, there is Gerard Pangaud Bistro in McPherson Square. Chef Pangaud was previously the head instructor at L'Academie de Cuisine.

Hamburgers continued to dominate the food scene in DC this week with speculation that Chef Michel Richard is planning to open a hamburger joint. No location or time line is known yet.

On Capital Hill, Good Stuff Eatery's Chef Spike Mendelsohn and three additional Top Chef fauxlebrities, I'm sorry, VIP's, were joined by a big crowd for ribbon cutting and champagne drinking during an opening party. I'm pretty sure this happens at every 5 Guys opening too, right?

I Eat DC is a blogger from Arlington, self-described as a "fun-loving, opinionated law student who takes on cheap and not-as-cheap eats in the DC Metro area". Check out iEDC's reviews of Ray's Hell Burger, Spider Kelly's and Lebanese Taverna.

Thanks for picking that up lackadaisi! Logan Circle-I'm the square:-(

Aha! THIS is why I had a bunch of comments from people who aren't my mom. Thanks : )