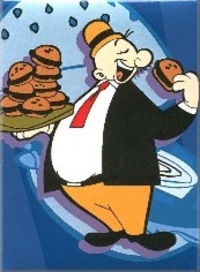 Heard around the DC Foodies blogosphere this week...The opening of Michael Landrum's Ray's Hell-Burger, aka Butcher Burgers, lit up the blogs and food boards this week. First written about by the self described improprietor on Don Rockwell, Landrum introduced his new venture as a place that sells hamburgers; 10 ounce patties of beef which are aged, hand trimmed, and cooked over an open flame. A generous selection of free toppings are available, along with a wide array of cheese (epoisse anyone?), guacamole and bacon.

News also broke on the eponymously named board by Rockwell himself that Butterfield 9 was closing for good. Shortly after, Todd Kliman reported about the latest 14th street casualty on Washingtonian's Best Bites Blog. Remarking that Chef Michael Harr's cooking was sophisticated and imaginative, and recently, consistent and never cheaper, Kliman lamented the loss of a veteran restaurant which was named one of Washingtonian's 100 best this past January.

Recently, I've seen a trend in local blogs, where foodies not only seek to get to know the food served in restaurants, but to get to know the chefs, purveyors and artisans as well. This week, a couple of intrepid bloggers gave us insight into the people behind the food we eat.

Chef Bertrand Chemel of 2941 was interviewed by Counter Intelligence.  Chemel dished about leaving Cafe Boulud, his aspirations for 2941, and how he views the food culture in DC compared to NYC. Bertrand shared his love for cooking, and the warm welcome he received from the local restaurant community.

Apples and Bananas wrote about a conversation with Penny Karas of Hello Cupcake. Karas explained that one of her keys to success is cupcake recipes that have been tested in an America's Test Kitchen fashion. Containing the highest quality ingredients, her cupcakes will be sold in a modern boutique store which is environmentally friendly. Hello Cupcake is expected to open this summer.

Finally, DC Foodies is reporting about the much anicipated airing of Throwdown with Bobby Flay's matchup with Granville Moore's Chef Teddy Folkman. Throwdown Moules Frites was taped in March 2008, and judges included DCFoodies.com Jason Storch and his wife, Amy. A viewing party at Granville Moore's is planned for the initial airing of the episode on the evening of July 8th. The show airs at 9pm.