An über brat for an über fest 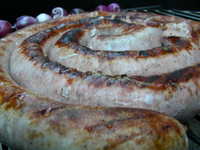 Five beautiful feet of bratwurst sizzling on the grill. Maybe it's the German in me (probably the Freud), but that enormous sausage is downright pornographic.

Saturday, Sept. 20 was the official start of this year’s Oktoberfest, so grilling an über brat was a must. So too was the sauerkraut, the Oktoberfest beers and the German potato salad...with swine. God I love German food. I also love my butcher.

Fact is, I could've ordered a whack of six-inch brats from the guys at Canales Quality Meats in Eastern Market. But why do that when they’ll make me a sausage as long as I want? So I e-mailed Carlos Canales and ordered up five feet of German sausage. It was ready the next day.

See, that's why we should patronize our local butchers and purveyors. The level of customer service is so much higher and the amount of knowledge they have about their products is so much richer than what you’ll find at your local chain grocery store. Besides, the quality and freshness of the products are far and away better than what you can get at Harris Teeter and Safeway. My sausage wasn’t trucked in, Canales made it. Quality, man.

Back to the meal. In addition to the brat, I put together a variation on my mother-in-law’s German potato salad. Ma Schmirler’s dish is a straightforward German potato salad with bacon in a vinegar dressing. In my version, I replaced the boiled red potatoes with grilled fingerlings, added grilled pearl onions and tossed it all in a mustard vinaigrette. I didn’t change a thing about the bacon.

Keeping in the spirit of things, I served all of this with a couple Oktoberfest beers. Using Rob Rutledge’s great reviews of German and American Oktoberfest beers as a guide, I bought six-packs of Bell’s Octoberfest and Erdinger Oktoberfest.

To make the mustard vinaigrette, combine the vinegar, garlic, mustard, thyme, basil, celery seeds and sugar in a bowl and mix well. Slowly add the oil while whisking rapidly. Add the salt and pepper to taste. Set aside until the potatoes are ready.

If you're using a charcoal grill, light it before starting on the potatoes. If you have a gas grill, boil the potatoes first. In either case, pull the bratwurst out of the refrigerator so it can lose some of its chill.

Place potatoes in a stock pot, cover with water and add a tablespoon of salt. Bring to a boil and cook until a knife inserted comes out with some resistance. Drain well and let them cool enough to handle. Slice the potatoes in half lengthwise and set aside.

As the potatoes boil, fry the bacon and set aside.

While the potatoes are still hot, add them to a bowl with the bacon and onions, toss with the mustard vinaigrette, and add salt and pepper to taste.

To serve, cut goodly portions of the brat, spoon out the potato salad, divvy up the warmed sauerkraut and pour the beer.

Ad placement on food blogs can be funny. Your nice post on your huge brat and friendly butcher has or at least had a ad next to it for ChooseVeg.com and what the meat industry doesn't want you to know about meat. Very amusing.

So you're saying that Canales has the best of the wurst?