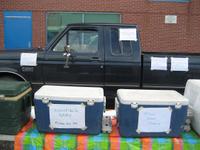 If you've overlooked Highfield Dairy in your trips through the Dupont Circle FreshFarm Market, you're not alone.  Highfield doesn't set up a tent, and they don't have a banner to advertise their presence to the crowds.  Week after week, Dan Adams or one of his associates pulls into the market in an old blue pickup truck and sets up a few tables with large coolers full of eggs, yogurt and an array of products made with Highfield's fresh goat cheese.  Hand-lettered signs announce what's for sale and how much it costs.  It doesn't get much more farm-to-table than this. 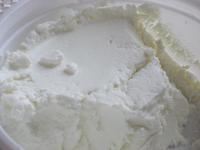 The star of the Highfield show is undoubtedly that fresh goat cheese.  With a herd of roughly 100 mixed-breed Nubian goats, John Marshall makes a goat cheese that is incredibly mild and creamy.  There is almost no trace of the usual tang (or the less pleasant earthy aftertaste) that tend to be the hallmarks of goat cheese.  Sold in 8-ounce and one-pound tubs ($6.50 or $12, respectively), the fresh chevre could easily be mistaken from cream cheese - even after the first taste!

But Highfield does us all a HUGE favor by taking their cheese to the next level and integrating it into a couple of addictive treats: goat cheese tarts and pierogies.  The tarts are a savory blend of eggs, peppers, tomatoes, herbs and goat cheese in a small pie crust.  They make a terrific breakfast on their own, though they can be paired with Cedarbrook Farm's pasture pure pork bacon or sausage for a really satisfying meal on a weekend morning.  The pierogies are a revelation.  Growing up in a Russian family, I've had my share of the traditional dough pockets filled with everything from mashed potatoes to prunes to sauerkraut...and I'm kind of a fan of the pork and chive filled dumplings from City Lights of China, as well.  Believe me when I tell you that Highfield's goat cheese-stuffed offerings (which are the size of an ice cream scoop, I might add) blow them all away.  They can be frozen, but be sure to thaw them completely before sauteeing in a little hot oil.  The cheese practically liquefies inside the dumplings and the dough crisps up to a beautiful texture. 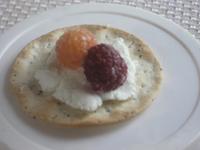 As good as the pierogies are, I'm a sucker for fresh goat cheese by itself...especially when spread on a cracked pepper cracker.  There's something about the interplay between the creamy tang and the sharp bite of the pepper that works so well.  But I found myself trying something new with this cheese because of its exceptionally mild profile.  Instead of enjoying the cheese on its own, I topped it off with a few fresh raspberries from another market vendor.  The sweetness of the berries took it to a whole new level - it was great!  So simple to put together, but still something that I'd be willing to serve to guests as an easy appetizer.  I'm definitely filing this one away for future reference.

Highfield Dairy can be found at the Dupont Circle market on Sundays - look for them in the PNC Bank parking lot next to the mushroom stand.  Alternatively, you can find them at the H Street NE FreshFarm Market on Saturday mornings between 9 AM and noon.  This smaller market provides a far more relaxed shopping experience where you can still find products from Cedarbrook Farm, Keswick Creamery, Atwater's Bakery and a number of fresh and/or organic produce growers.  In either location, it's worth seeking out Dan for a taste of his creamy and delicious goat cheese.

The whole point of eating goat cheese is tang and earthiness or else just get cream cheese.

Generally speaking, I agree. But don't knock it until you've tried Highfield's chevre. It really does have a great flavor that sets it apart from most goat cheese...and the tang isn't so much absent as very subtle.

hmm...i think I can get my husband to open up to goat cheese with this one. He "thinks" he hates it, but I think I can sneak this one in, w/out him ever knowing.

There are lots of varieties of goat that have a mild flavor. Cherry Glen Farm's Monocacy Gold is a good example. It has a flavor closer to a tangy brie than your typical goat. I'm looking forward to trying this one.

It sounds like you grew up on pierogies too, Mike! I LOVE all the types you mentioned (well prune..not so much ;-)

I've had the goat cheese pierogie and to me, they are more akin to ravioli than a pierogi, with thinner pasta. I think that allows them to be used in so many ways, from a Meditereanean preparation, to being cooked and paired with a fruit sauce and nuts.
I can't wait to get back to the Dupont Market!