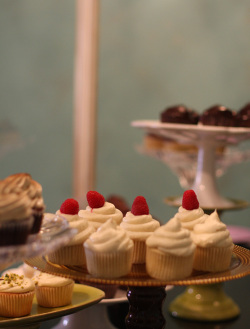 Heard around the DC Foodies blogosphere this week...the cupcake wars continue this week with a Washington Post head to head comparison between Baked and Wired and Lavender Moon Cupcakery. Baked and Wired came out well ahead of Lavender Moon Cupcakery, both in terms of value (price per ounce), texture and flavor. B&W's cupcakes were at best "like a Snickers bar", while LMC garnered an " I could live with this" for their Triple Callebaut chocolate cupcake.

Lauren, of Capital Cooking, blogged this week"On our Crazy for Cupcakes episode, (coming soon) I will teach you how to make some fabulous cupcakes at home as well as exploring some of the best places to get cupcakes in the DC area."

Two of DC's food bloggers/website owners are getting their voices out over the airwaves. First, Nycee Nellis (The List Are You On It), along with her husband, David, will launch a radio show called "Dishing It Out" on Federal News Radio this Sunday. Jane Black of the Washington Post reports.

Metrocurean dished about fall food on XM's Broadminded this week, along with Andrew Stover of Chief Wino.

In DCists Drink in the Details new monthly column, writers Adam Bernbach (Bar Pilar) and Chantal Tseng (Tabard Inn) launched with a fascinating and entertaining article on Vermouth. Once consumed for its presumptive medicinal qualities, the columnists note that " Vermouth was relegated to a shelter for besotted fruit flies", and call for "vermouth to bring back the balance" to cocktails.

News of the departure of three chefs at Eric Ripert's West End Bistro was broken by Don Rockwell on his eponymous site last Saturday. The Going Out Guru's reported that Executive chef Leonardo Marino and at least one of his sous chefs were suspended last Friday amongst allegations of "behavioral problems". When contacted, Marino stated only that "I resigned today."

Rockwell went on to write "I will miss Leo Marino, Rob Berry, and Ricky King. They made Westend Bistro into a great kitchen by their own talents and merits, and without any help from New York.
The new chef is Joey Palma, who just came down from Le Bernardin. Welcome to Washington, Chef Palma, and we all wish you the best of luck. You have some big shoes to fill - three pairs to be exact."

Tom Sietsema, the food critic for the Washington Post, released "The review that you won't read in the Oct. 12 Washington Post Dining Guide: WESTEND BISTRO BY ERIC RIPERT (2 1/2 STARS)" at the begining of his Wednesday food chat this week.

Another Don Rockwell member, goldenticket, confirmed the closing of 100 King in Old Town Alexandria. The restaurant had been doing its best duck and weave (with live music and a menu change-up) to stay upright, but alas, could not avoid the TKO. 100 King's glass jaw may have been cost in its prime location, tourists patronage vs. becoming a "local's" restaurant, or food that never had people thinking passion, but only passable, when eating.

1905, a French-inspired bistro in the Old Grape Legs space had its soft opening this week. Daily Candy described the interior "From the looks of things, the dining room could well have been a bar car on the Orient-Express. Gothic chandeliers and eclectic furnishings (hello, repurposed locker room benches) fit perfectly in the intimate Victorian boho space."

Metrocurean describes the second-floor space as "comfortably worn-in, from the gold pressed tine ceiling to the aged copper bar and exposed brick." Jim responded regarding the soft opening "Limited wine list and menu, but both are good and offer good value. Good scene and should be a success."

Cupcake wars -- i voted for Sticky Fingers bakery. I'm vegan, but my mom isn't and she didn't even know these were vegan cupcakes until i told her.

Sunday brunch @ Founding Farmers. Love the concept - owned by 42,000 some farmers who supply the restaurant with fresh produce. The stack of pancakes were among one of the fluffiest in DC. We also ordered the Houses Hashes with bacon and sausage, which tasted very healthy for hash browns. It would be even tasteir if the hash were a little bit crispier. The Spicy Ahi Tuna Poke Salad is also a favorite of mine. The sesame vinegrette dressing made eating a healthy salad fun. It's has just the right amount of kick in the "spicy." The combination of fresh raw tuna on top of cold crispy cabbage salad was mouth-watering. It's hard to find a good salad in DC - but now it's gotten easier. The waitstaff still has a few kinks to work out but every one is friendly and well-intentioned. Great place for brunch and lunch.Looking forward to going back and trying out dinner.

FRO-YO Review of Tangy Sweet. I have thoroughly enjoyed the fro-yo craze in NY and now DC. The
"tang" in Tangy Sweet is stronger than its counterpart. I prefer less tangy but there is a following out there looking for the tang. I was disappointed at how chinsy Tangy Sweet was with the toppings and the selection was tres boring. Nevertheless, it is great to have Tangy Sweet and other local fro-yo shops in DC.

I voted for Hello Cupcake in the Cupcake War. I'm not a big fan of the cupcake craze, but its were fantastic.

AMAZING roundup! As for my fave in the cupcake wars? Definitely Georgetown Cupcake!