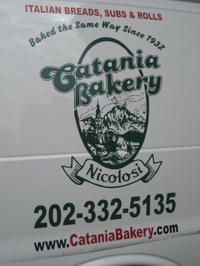 It's hard to think of a business that's been around for more than 75 years as a well-kept secret, but somehow Catania Bakery has managed to stay largely under the radar as the ranks of DC Foodies have continued to grow.  Maybe it's the location, or maybe the fact that the lion's share of their baked goods go to restaurants who fail to credit their source, but a search for them online reveals their website, a quick note about their croissants from the Post and a few neighborhood blogs that have posted about their baked goods.  You really won't find the profusion of coverage that you might expect about a place that has served the community since 1932.

Though you've probably never visited Catania's actual shop, there's a good chance you've tasted some of their goods.  If you've ever eaten a sandwich from A. Litteri or Mangialardo & Sons on Capitol Hill, or if you've tried the biscotti at one of several Italian restaurants throughout the city, then you've had Catania.  This is authentic baking, and it stands in stark contrast to the national chains' offerings in terms of crumb, crust and taste. 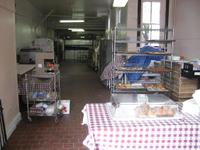 With restaurant sales providing their bread and butter, you might think they would be too busy to sell directly to the community.  But Catania Bakery continues the traditional retail aspect of the business that the Caruso family started back in the day, opening at 6 AM on Saturday mornings to sell pastries, croissants and muffins in addition to their biscotti and breads.  The smell of fresh baked bread and rich, buttery croissants draws you in from the street, reassuring you that you've found this out-of-the-way gem. 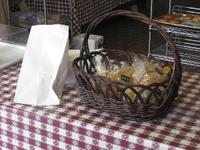 Walking in the door, you'll likely find yourself greeted by a friendly face.  It may even be Nicole Tramonte, who bought the business from the Carusos back in 1978.  She has run the bakery for the past thirty years, building up their restaurant clientele without forgetting the neighborhood.  Take the time to chat with whomever greets you and you'll learn plenty about the baked goods piled in front of you.  If you're in the mood for something sweet, try a pastry or pick up a bag of biscotti for snacking.  But if you're looking for quintessential Italian bread, complete with a dusting of semolina flour that rubs off in your hands, you'll need to get there early.  Once supplies are gone, that's all for the week.  Call it a reward for getting an early start to your weekend! 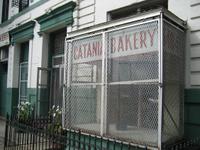 Getting to Catania is easier said than done, but it's well worth the trip.  The bakery is still located in its historic home at 1404 North Capitol Street, which is on the south-bound side of North Capitol just before you come to New York Avenue.  If you're coming by Metro, your best bet is to take the Red Line to New York Avenue and then walk along New York until you reach North Capitol.  If you're driving, do yourself a favor and take Florida Avenue to North Capitol and then head south, making sure to stay to the right as you approach the point where the North Capitol passes under New York.  Look for the sign in the window and another across the entrance to the building next door, and then head for the open door between them.

Catania's fresh baked goods are delicious, bringing back memories of growing up at the Jersey Shore.  They may not have access to the water that New Yorkers and Philadelphians swear give such distinctive tastes to their local breads, but it seems that Catania's has been doing something right for three quarters of a century.  Their low prices are an added bonus - you can walk out of Catania's with a half-dozen pastries, a bag of biscotti and a loaf of crusty Italian bread for less than ten dollars.  Good luck pulling that off at one of their competitors with locations throughout the city (or the country).

One word of caution before you go rushing out this weekend - call ahead to make sure they'll be open.  Unfortunately, Catania's was robbed (again) this past weekend and could not open last Saturday.  Hopefully they'll have everything squared away in time for this weekend, but there aren't a lot of other options in the neighborhood if you show up and find them closed.

we grew up on catania bread, though the sign on the window must have been small because my dad could never remember the name of it. it was the best thing about childhood.