As I mentioned briefly at the beginning of my post on HFCS last week (thanks to everyone who commented, by the way), I had the good fortune to spend a good deal of the month of October in the north of Portugal. I don't want to blather on about how great it was, or how I almost decided to expatriate given our economic woes at the time — suffice it to say that those two weeks amounted to one of the most awe inspiring experiences of my entire life.

I don't use that last phrase lightly; the places I visited and the things I saw were amazing, and wholly unique to my experience... which is why I find it so damned frustrating that, a brief two weeks later, I struggle to remember anything about it! I had grand plans of writing a huge, meandering opus, but now (lucky for you!) I find it hard to remember anything but brief glimpses and vivid flashes. Such is the human mind, I guess; or at least, my wine addled one. Fortunately, thanks to my trusty digital camera and what few synapses are still firing, I have managed to retain a bit of the trip, some of which I hope may be of interest to you guys. 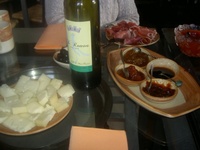 Most of the trip was taken up in hiking the country's many hills, and so I found myself unusually, and quite blissfully, in the middle of nowhere. As such, most of my meals were provided by the hosts at whose houses we stayed. Though rarely complicated, these meals were some of the best arguments for locally purchased foods I have ever tasted. Portugal's economy is heavily agricultural, and in the north this is evident in every bit of open space. Breakfasts were universally continental, featuring locally made fruit preserves, delicious fresh baked bread, and cheeses from nearby Spain. Chestnuts also figure heavily into the cuisine — orchards were everywhere, and the nuts found their way into everything, providing texture for rice, stuffing for pork, and flour for cakes. 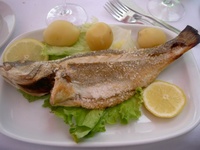 Without question, the highlight of Portuguese cuisine is the fish. Though initially reticent, a couple experiences at Tosca and Obelisk left me a huge fan of grilled sardines. On several occasions in Portugal we were presented with spreads that would put those august institutions to shame, though with admittedly less pomp and circumstance, and a far lower price tag. I also had the good fortune to come across the Portuguese speciality robalo ao sal, or, salt-crusted sea bass. As I understand it, the whole fish is treated with olive oil, thoroughly covered with sea salt, and then baked. The result is the most amazingly moist fish I have ever tasted, without the least residual salty flavor. I couldn't begin to tell you how they did it, but there is a recipe on Epicurious, and I definitely plan on trying it out.

At the end of our trip, when we reached Porto, Portugal's second largest city, I expected a bevy of cosmopolitan restaurants. Though there were a handful of familiar dining establishments (including a pizza place and a sushi joint), Porto is dominated by cafes. Just as Dublin has pubs and DC has Starbucks, 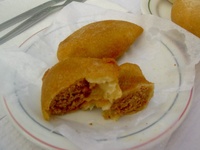 every corner of Porto features one or more small cafes, and though each has its own identity, all were sponsored by a handful of parent corporations. I visited several of these places over the course of my stay, and though I'm loath to generalize, they all shared two things in common: meat pies and Super Bock. The former is easy enough to understand; hell, every western culture has its incarnation, from the saltena to the shepherd's pie. In Portugal, the most common type is the little guy pictured at left: about three ounces of ground pork,wrapped in dough and deep fried, served cold from the display case. For deliciously fatty indulgence, these pies cannot be topped, and I enjoyed dozens while trolling the city, none for more than 75 (Euro)cents a pop!

Portugal's cafes' most ubiquitous offering is Super Bock, Portugal's best selling beer. If you think Budweiser has a stranglehold on the US, you have no idea — this beer was literally everywhere, and in most places the only available, draught or otherwise. The basic offering is not unlike your American macro lagers like Miller and Bud, but fuller, and decidedly higher in alcohol, coming in at a healthy 5.3% ABV. In addition to the lager, Super Bock offers up a potable amber, a disagreeable stout, and a bizarre flavored concoction called Super Bock Green, which makes the vile Miller Chilada seem downright tasty.

But of course, being in Portugal, my major focus was on wine. Though the nation is all but synonymous with its fortified wine port, it produces a healthy output of quality dry wine — which is a damned good thing for the Portuguese, as there was NO other wine available. Whether in a cafe, restaurant, or wine shop, the ONLY wines available were domestic. I gleaned rather quickly that the Portuguese were a proud and nationalistic people, but I was shocked at the absolute lack of any international alternative, European or otherwise. Were my command of the language anything resembling competent, I would have inquired as to why. Sadly, my combination of broken Spanish and American English wasn't up to the task. 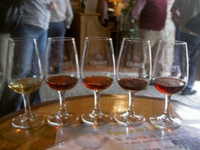 Anyhow, to the port! Being a sucker for sweet wines in general, I was already well acquainted with port before my arrival, and figured there wasn't much Porto could show me. How wrong I was! I promise to speak more on port in the future, but for brevity's sake, let me finish now by passing on Portugal's most valuable lesson to me, which is that port comes in many colors, and they are all delicious. Through everyday work experience, I had become well acquainted with tawny and ruby port, and respected each for its merits, all the while writing off white port, the much maligned stepchild. Developed during the Spanish Revolution in the 1930's as an alternative to sherry, white port is relatively young in the history of fortified wine, and I can now say from experience that it has not gotten the recognition it deserves.  Treated similarly to your younger tawnies, white port takes all the nutty, oxidative flavors of a tawny port, and places them on a tannin free canvas, offering up all of a tawny's depth of flavor without the weight. White port is huge in Portugal now, with each producer offering up its own branded cocktail of white port and tonic or club soda with a twist.

As the last dying embers of warm weather pass us by this coming week, consider picking up a bottle of Fonseca Sirocco or Dow's White Port, and mix it up with a bit of Seagrams and a squeeze of lime; it's the perfect bittersweet cocktail to bid farewell to the last dregs of late afternoon warmth. I plan on having one tomorrow, and hope that it will help me grab another fleeting memory or two out of the ether.