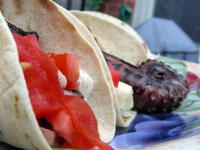 Inspiration is a funny thing.

While picking up a few things at Eastern Market the other day I noticed that the guys at Southern Maryland Seafood had whole octopus on sale. Now, I imagine that most folks would consider this little more than a curiosity and turn their attention to the beautiful whole red snapper, the piles of shrimp or the fat sea scallops sharing space in the refrigerator case.

Not me. The octopus got me. I was inspired.

I’ve eaten octopus a few times. It’s popular among Greeks, who’ve been cooking it since Zeus was chasing skirts around Olympus. But for those of us who aren’t Greek and didn’t grow up in Greece, the octopus is something to see at the aquarium, not toss on the grill.

That’s why I bought one. If the Greeks have been cooking octopus for a couple millennia, surely I could figure out how to grill it. And because I love all things burrito and taco, I decided the best way to serve it was in warm flour taco shells with tzatiki sauce.

As it turns out, grilling octopus isn’t that hard. Separating the legs and quartering the trunk takes seconds. And tossing it on the grill for a couple minutes per side is the epitome of easy cooking. The trick is to know what to expect out of the octopus.

Second, even after the octopus has been stripped of its outer skin (something your fish monger should do for you) and rinsed before cooking, the bugger retains a good bit of salinity. This isn’t a big deal, really. The meat offers a slight taste of the ocean, which is nice when you’re eating seafood. But you need to account for the slightly salty flavor by decreasing the amount of salt you add to the tzatiki (unless you buy it pre-made) and not adding any additional salt before or during cooking. A little lemon and olive oil and you’re good to go.

Third, grilling the octopus tenderizes the meat quite a bit, but it’s best to cut the oct 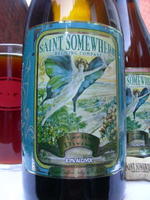 opus into bite-size pieces (like you would calamari) after grilling. If you want to go all Greek, replace the flour tacos with flat bread or pita. However, I find that the flavor and texture of flour taco shells are a great compliment to any seafood you cook on the grill.

To round out the meal, you could pick up a bottle of Greek white wine. Served chilled, these semi-dry crisp wines would work well with the octopus.

Better yet, you could pick up a couple Saint Somewhere beers, brewed in Tarpon Springs, Fla., one of America's largest Greek communities. Is this a naked plug for a brewery from my hometown (Go Rays!)?  Sure, but the beer is quite good.

I picked up a bottle of the Saison Athene and Lectio Divina at D’Vines in Columbia Heights. Saint Somewhere’s Lectio Divina, an abbey style ale, was good, but the saison was outstanding and matched perfectly with the octopus tacos.

As a matter of fact, the pairing was downright inspired.

(Makes 4 servings)
I made my own tzatiki sauce, but feel free to buy it. I just can't find a container of it I like as well as my own. If you do buy it, doctor it up with the fresh oregano, lemon zest (as described below) and a diced English cucumber.

Grilled octopus
1 2.5 lb. octopus, cleaned and trimmed of its beak (fish monger should do this for you)

If you make the tzatik

i sauce, take care of it the day before. Combine the yogurt, olive oil, lemon zest and juice, garlic, salt and black pepper in a bowl. Cover the bowl and refrigerate it until you need it. When you're ready to serve, mix in the cucumber, oregano and dill.

For the octopus tacos, light your charcoal or preheat your gas grill to high. Remove the taco shells from their packaging and wrap the stack in aluminum foil so they can warm on the grill.

Using a sharp knife, remove the legs of the octopus from its body, but leave them whole. Cut the body into four pieces. Rinse the octopus pieces and pat dry.

When the grill is ready, oil the grates to prevent sticking. Place the octopus on the hottest parts of the grill. Brush with olive oil and squeeze some lemon over top. Stick the aluminum foil packet of taco shells off to the side of the grill.

On a cutting board, cut the octopus into bite-size pieces.

To assemble the tacos, spoon some of the tzatiki sauce onto the warmed flour shells, add the octopus pieces and tomatoes, and squeeze some fresh lemon on it all.

That sounds amazing! I'm a huge fan of octopus, having first tried it as pulpo a la gallega at Jaleo.

If you do try the recipe, consider adding grilled halloumi chesse or smoked mozzarella. You'll be doubling down on the dairy, but it'll be excellent.

I think I'm going to try this with squid. I love octopus, but the former doesn't involved trekking out to Eastern Market lol.

Whole squid would work great here. But if you want to try it with the octopus, you can also find it at the wharf on Maine Ave.

You are a brave, brave man... My stomach mutinied just reading this.

Now where can I get some good fish tacos like I've had in CA? Is it even possible?

I tried octopus in Turkey, and man was it ever delicious!
It is one of those things I feel bad for eating though (they are really intelligent).

The pig is also a pretty intelligent animal and I've never had a problem with bacon.

As to Allen's question about fish tacos, I've had them from time to time at local D.C. restaurants, but none of them stood out. And the one time I had "authentic" fish tacos in San Diego, I wasn't too impressed because they came with soft corn tortillas, not flour. If that is the traditional way of serving them, then I'm not a fan (never did like corn tortillas). So my advice is to grill a few white or red fish fillets (catfish, snapper, tilapia) on the grill or batter and fry them in oil and make your own fish tacos (with flour tortillas, of course). For toppings I'd use avacado, caso blanco, fresh tomatoes and a lot of hot sauce.

Allen: Best SD-like fish tacos I've had in the DC area are the fish tacos at Taqueria Poblano in Del Ray.