Jacques Pepin at the Smithsonian 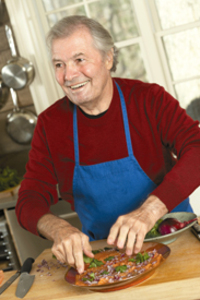 Seasoned chefs, beginners and even those afraid of the big bad stove can appreciate Jacques Pepin – his style caters to anyone who loves food.

The author of more than 25 cookbooks and host of nine public television cooking series (I get exhausted just typing that), Pepin will visit DC to discuss his new PBS series. On October 29 Pepin, a columnist for Food & Wine magazine, will discuss his new series, More Fast Food My Way, a sequel to Fast Food My Way at the Baird Auditorium at the National Museum of Natural History. Pepin will be interviewed by Joe Yonan, editor of the Washington Post Food section

Attendees can look forward to video clips from the new series, a conversation about Pepin’s culinary career and a book signing.

Tickets are $28 (for general admission, resident members are $18) and can be purchased online.