Is there a more ubiquitous American dish than the hamburger? Pizza maybe, but it's debatable.

Regardless, we love burgers. Whether it's just beef on bread or something more elaborate (foie gras burgers?), the sandwich speaks to us. But we eat burgers all the time. So regardless of how good a burger may be, most end up forgotten. A blur of a meal enjoyed in the moment and forgotten soon after.

Every now and then, though, a burger stands out. Something about it -- the beef, the bun, the toppings, the surroundings -- makes the ubiquitous unique.

A couple years ago, I was stuck at a conference in Pittsburgh. Now I've attended a lot of conferences and one thing I learned early on was when things wrap up for the day, I should get as far away from the rest of the attendees as possible. The only thing worse than being at a conference you don't want to attend is to surround yourself with several thousand conference attendees who don't want to be there either.

After spending a few days trying out restaurants as far away from the convention center as possible, I broke down and slipped into a small restaurant across the street from the hall. It was the last day of the conference and all I wanted to do was eat, pack, sleep and leave.

That's when I found the burger. The restaurant (who's name I can't remember or find) wasn't Asian, but the bar had Ninja Warrior on ESPN and a Samurai Burger on the menu.

When it comes to burgers, the more bacon, cheese and mayo you can stick on it, the happier I am (Unless, of course, you have an avocado handy. A couple slices would be nice, thank you.) The Samurai Burger had none of it. Beef, bun, ginger mayo and seaweed salad, that's it.

Nevertheless, I ordered it and loved it. 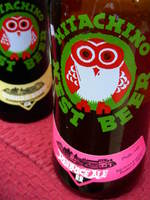 The beef patty was well seasoned and the ginger mayonnaise was creamy with a terrific ginger bite. But what made the dish was the seaweed salad. It was crunchy, tart and a little salty. Absolutely perfect on top of the burger.

I've had dozens and dozens of burgers since then, but only a few have stood out as much as that Samurai Burger. And while I don't know the name of the restaurant or remember what it put into the burger, I figured I'd take a crack at replicating dish. I figured that as long as I top the whole thing off with seaweed salad, I'd get pretty close.

I paired the burger with a couple Hitachino Nest’s beers, the Red Rice Ale and the Real Ginger Brew. The Japanese red ale is slightly tart, crisp and slightly fruity. The ginger beer is a surprisingly refreshing reddish ale with a slight ginger finish. Both beers are far and away better than the clone-like Asahi, Kirin and Sapporo.

2 ginger roots (about 3 inches each), peeled and grated

Make everything about an hour before you're ready to grill. This will allow the flavors and ingredients to come together before you start cooking.

For the ginger mayo, combine the mayonnaise, 2 tsp. of cracked black pepper, the green onion and one of the grated ginger roots (about 2 tbs.) in a bowl and mix. Cover and place in the refrigerator for at least an hour.

To make the samurai burgers, combine the ground beef, remaining ginger root, soy sauce, sesame chili oil, sesame oil and remaining 2 tsp. of cracked black pepper in a bowl and mix thoroughly with your hands. Once the ingredients are combined, form four burgers. If you are planning to grill them immediately, do not refrigerate the burgers. Otherwise, cover the burgers with plastic wrap and stick them in the fridge.

After 3 minutes, move the burgers to cooler spot on the grill. (If you like your burgers cooked to medium, leave them on for 5 minutes.) Place the sesame seed buns over the heat to toast for about a minute or so (watch them closely).

Pull the burgers and the buns off the grill, slather the ginger mayo in the toasted bread and top the burger with the seaweed salad.