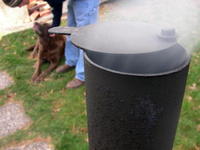 I understand why some people say Labor Day is the official end of grilling season. I understood it acutely on a recent Saturday morning as my breath fogged the air in front of me.

As much as I believe that grilling is a year-round activity, there are a few things that are better done during the warmer months. Smoking meat is on the top of that list.

Rather, smoking meat was on the top of that list.

The ambient temperature is constantly trying to cool the smoker off, which makes it that much harder to maintain proper cooking temperatures within the smoker.

I was talking to some friends about this a few months ago when I realized I wouldn’t have time to smoke another pork butt this year (yes, these are the kinds of conversations I engage in). I told Sarah and Andy about how much of a pain in the ass it would be to try and keep my little bullet smoker hot enough, long enough (26 hours) to properly cook a butt.

That’s when they mentioned their smoker. It seems the guy they bought their house from left behind a 738 sq. inch smoker, replete with firebox and smokestack.

Would that work in the winter, they asked?

I didn’t know, but I’d find out. That’s how I came to find myself outside their house on a 32 degree morning loading two ducks, a chicken and a few sausages into their smoker.

Because I didn’t know whether I could smoke anything on such a cold day, I decided to skip the 8 pound pork butt and improve my chances with the smaller birds and Italian sausages. To help the process even more, I butterflied the birds and laid them flat on the grill.

As it turned out, the butt might've worked. I assumed it would take between five and six hours to smoke the birds and sausages. It took about three.

Unlike my little bullet smoker, which only has a small pan to build a fire in, I was able to build a big and hot fire in the firebox. I was also better able feed the fire and use larger pieces of wood throughout the cooking process. That meant the interior of the smoker stayed hot enough, consistently enough, despite the freezing temperatures outside.

The result? Smoky, delicious fowl and sausage. The sausages needed only about an hour, but came out of the smoker dark-skinned and juicy inside.

The birds were cooked thoroughly and moist. Even though they only got a few hours in the smoke, the flavor gently permeated the chicken and duck meat, standing up to the juniper beer glaze, barbecue sauce and Chinese five-spice powder that seasoned the birds.

So can you smoke meat in the winter? Absolutely. Is it a good idea to take on a project that requires you to hang out outside in freezing temperatures? Probably not.

But the results sure are good.

The night before, rub the chicken thoroughly with barbecue rub, making sure to get it under the skin as well as on it. For smoking chicken or pork, I use Steven Raichlen's barbecue rub. However, I use garlic and onion powder rather than flakes.

For the barbecue sauce, I use my own, which is a spicy Guinness-based sauce. You can also use your favorite commercial sauce. If you make my barbecue sauce, simply combine the ingredients in a sauce pan and cook uncovered over low heat for 20 minutes.

When you're ready to smoke, build a fire in the firebox and place a pot of water or apple cider inside to keep the air moist. You will have to refill the pot every couple hours. I'm not fussy about the wood I use for heat. For the smoke, I use cherry wood chips.

Butterfly the chicken and place the bird inside the smoker skin-side up. After three hours, use a thermometer to check the temperature. If it's between 170 and 180 degrees, the chicken is ready to come off.

You'll notice that the skin of the bird has turned black. It's not burned, it blackened by the smoke. This is called the bark. I usually peel the skin off the bird and dice up about half of it to mix in with the chicken.

After the bird has rested for about 10 minutes, pull the meat off the carcass. Cut into bite-size pieces and mix with the diced skin and barbecue sauce.

Sea salt and pepper to taste

When you're ready to smoke, build a fire in the firebox and place a pot of water inside to keep the air moist.

Butterfly the duck and season with salt and pepper and place in the smoker skin-side up. Smoke for about 3 hours or until the internal temperature reaches 170 to 180 degrees.

Begin preparing the glaze by combining the beer, juniper berries, pepper corns and brown sugar in a sauce pot. Bring to a boil and then turn down the heat so the sauce simmers uncovered. When the sauce has reduced by about half and thickened, about 20 minutes, move off the heat.

After the duck has been in the smoker for about an hour, brush with the juniper glaze. Repeat every hour until the duck is done.

When the duck is cooked, remove from the smoker and let it rest for about 10 minutes. Then, carve the meat off the carcass and brush with the remaining juniper glaze.

The day before, rub the duck thoroughly with the salt, pepper and five-spice powder, making sure to get the seasonings under the skin.

When you're ready to smoke, build a fire in the firebox and place a pot of water inside to keep the air moist.

Butterfly the duck and place it in the smoker skin-side up. Smoke for about 3 hours or until the internal temperature reaches 170 to 180 degrees.

We grill our turkey for Thanksgiving. It has become a family tradition. We made Thanksgiving a grill holiday.

Nice post. I have been a life long low and slow aficianado and have tried a lot of cookers. I have found that moving to an insulated box / vertical smoker allows one to smoke year round with great consistency. I currently use both a Cookshack smoker as well as a large Stumps GF-223. Both give great results regardless of the weather or temp.

I smoked a Brisket for 12 hours in my Weber Smokey Mountain over the weekend. I was magnificent.

Chaofun, do you do anything to help your smoker stay warm, such as keep it out of the wind, feed it more wood, ect.?

Reid, I like the idea of the smoker boxes like the Cookshack and Stumps, but like my Weber bullit, they tend to be one-dimensional, i.e. smoking only. The smoker I used for cooking the birds and sausages can do double duty as a grill, which seems to be a huge bonus in its favor.

Drew, I used a Weber for many years and it is a great grill/smoker. I just got tired of having to stay close by when I did a smoke especially in cold or wet weather. Now I toss the meat in and take it out 10-12-14 hours later and never check the box temp... guess I am just getting lazy..LOL!!!

Not to be the health police, but I have to ask: you do know that the smoking process adds carcinogens to food, right?

Studies have found that a diet rich in home-smoked foods doubles your risk of stomach cancer (http://www.ncbi.nlm.nih.gov/pubmed/7447916 ).

Enjoy, but be aware.

Hi Jay, I think you're reading the wrong site. Perhaps you are better off over here...
http://www.prevention.com

LOVE smoking in the winter. Three Weber Smokey Mountains and a Kamado. What kind of wood did you use? Fruit woods seem to work the best, and you really can't oversmoke with apple. Mesquite and hickory can go a little overboard but never apple.

I've found that rain or snow doesn't have much impact on internal smoking temps. But WIND will cause massive temp drops.

For fuel, I was using a combination of red and white oak, mostly red. So monkeyrotica, do you do anything to insulate your smokers from the winter elements?

No insulation on the WSMs, and once they're locked in at 180 to 220, they're good for 8-10 hours, rain or snow. Just have to refuel, add wet wood chunks, and pour water into the pan with a flower waterer dealie (I use the Brinkmann 1-gallon charcoal pan mod). Patio umbrella to deal with sprinkles. If it's particularly windy, I might huddle the two other smokers together. Haven't noticed any temp fluctuations. Some folks use old boiler heaters, but that seems overkill for me.

The Kamado is pretty much a meat kiln; retains and radiates heat over the long haul. It'll still be warm hours after the coals have gone out.