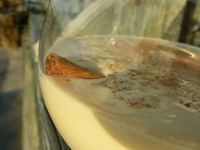 Stick me on your Christmas card list, folks, because I'm giving you a present.

A couple years ago, my buddy Columbo gave me the recipe for the greatest egg nog ever.

Mind you, I like the store bought stuff. I grew up on it and looked forward to it every year. And then Columbo, who grew up not 30 miles from me in central Florida, assured me that if I followed the recipe I'd never go back to the commercial stuff. He was right.

Not only is the egg nog incredibly rich, wonderfully sweet and perfectly noggy (it's a word ... now), but it's as boozy as Andy Capp. I ain't kidding, this stuff is not for kids. The recipe makes a half gallon of egg nog; a cup and a half of it is straight booze.

Man, I love this nog.

The original recipe calls for equal amounts of bourbon, brandy and light rum. This mixture makes a fine nog, but I've altered (improved) it. Growing up, my mom always added spiced rum to her egg nog. Consequently, that's the flavor I like and expect, although I prefer dark rum. I also like using Wild Turkey 101 proof bourbon, which is strong stuff (my chest is as hairy as Santa's beard). To incorporate the additional rum and compensate for the higher strength bourbon, I add three quarters of a cup of rum, a quarter cup of bourbon and a half cup of brandy.

Basically, if you keep the mixture of spirits to a cup and a half, you're going to be fine.

So without further ado, here's the recipe.

Separate the eggs and beat the egg yolks with sugar until thick. Slowly add the cream, milk and spirits.

Sprinkle with nutmeg before serving.

That is some serious nog! I'm adding this to our neighborhood holiday party!

To paraphrase Dave Barry: I am probably not guilty of understatement when I say that this egg nog is the most wonderful drink in the history of the universe.

Wait you're from Central Florida? So am I (go gators). Any idea of how far ahead I can make this before serving at a party? I've got to bring something to the office holiday party and apparently booze is ok.

Having grown up in Pasco County (go Bulls), I was amazed Columbo, born and raised in Polk County, could produce a beverage as grand as this egg nog. If you make it the night before your party, you'll be good to go. Heck, you might even get a raise.

Perfect timing -- just in time for my "Egg-Noggeration" Party tonight!

Wow, with the booze, this might just melt the ladle!

I am starting to wonder-is this DCFoodies or DC alcoholic anonymous?

Well, that is the thing about alcohol, Tim. It's something that should be consumed responsibly. If you do not believe you can enjoy this recipe or the other alcoholic beverages mentioned on DC Foodies, I recommend that you avoid them. And if you do have a drinking problem, Tim, you can still make the egg nog. Just omit the spirits and enjoy. Merry Christmas!