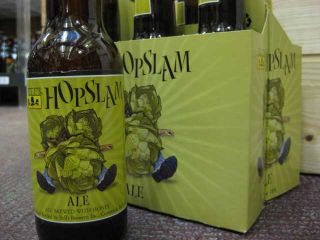 Every year towards the end of winter, with an American populous depressed and at wit's end from lack of serotonin and vitamin D, the benevolent lords of Bell's Brewery in Kalamazoo, MI, smile kindly on the piteous masses, and release one of the most delicious beers ever made: The Hopslam! Great reveling ensues, with many a sacrifice to Xenu, the God of Hops, and for a brief time, the people are happy.

I know I've never done a post on a single wine or beer before, but this one is truly special. The Hopslam is an Imperial IPA, or American Double. Taking off from the traditional recipe for Indian Pale Ale — those strong, hoppy ales that powered Britain's benevolent rule of the eponymous subcontinent — American brewers upped the ante, increasing the original's high alcohol content and throwing in a tongue-stripping amount of hops.

I am no "hop head," and have always preferred a light English Bitter or German Kolsch to nearly any Imperial IPA; most are gawky and monstrous, one dimensional and overwrought, and many taste like a bong hit of stale pot and pine needles (AKA the "Oberlin Special," which is NOT as tasty as it sounds). Likewise, sweeter beers also turn me off, as many come off cloying and chemically, and as my girlfriend puts it, they make my teeth "feel furry." 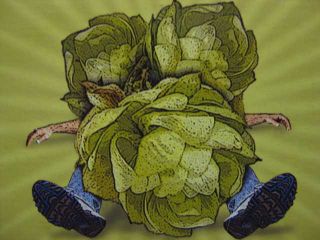 Though equally potent as its contemporaries, with plenty of hops and a brain-numbing 10.0% abv, the Hopslam has that most rare and important characteristic in particularly potent potables: Balance! Fermented with a healthy portion of both hops and honey, the Hopslam is both sweet and bitter, and manages to play these often ill-employed flavors off each other with incredible grace. The beer pours a hazy golden-orange, with a full, foamy, off white head. The nose is a heady melange of honey, hops, and spice, which taken together is reminiscent of sweet grapefruit. The beer is oily textured and full from the start, carrying with it rich flavors of hops, toasty malt, cooking oil, tropical fruits and pine, all leading up to a pleasingly bitter, long lived, honey laced finish.

As the craft beer revolution has swept the District and Bell's Brewery had garnered tons of well deserved esteem, the Hopslam has gone from being one of those beers that is abundant at a few stores to one in short supply at many. You should have little trouble finding it at your better beer stores for the next week, but the hype is high and the beer rocks, so you won't see much beyond that, and expect to pay upwards of $15 to $20 per six pack.  I know it's not cheap, but trust me when I say it is worth it. If you know the beer and love it, get it quick before it is gone; if you are a beer lover who has never had it, go buy some now!

Do you if this is correct? Did you pick yours up in DC? I don't to drive to Virginia just for beer, even if it's this one.

Yeah, I wondered about that part of the site: it has been available in DC for several years now, AJ, no worries. I know we have a few cases left, and I am sure at this point lots of places have still got a bit.

Where you see it so far?

I haven't really been out and about in the city in the past few days, Evan, so no where in particular. The distributor literally just released the stuff on Wednesday, so any store that regularly stocks Bell's is sure to have gotten some. We have it at The Wine Specialist, and I have little doubt that Cairo in Dupont has some, and Chevy Chase Wine and Spirits is always a safe bet. I am told that this year the distributor has a relatively small supply, and is trying to dole it out as fairly as possible, so it should be pretty widely available in the very short term.

Oh! And I would not be surprised to see Greg over at Birreria Paradiso put it on draught in the near future. At least, I HOPE he's snagged a couple kegs...

Yea, last year i bought a case or two at Chevy Chase Wine. I saw it at a whole foods as well. CC is closest for me, though i might check wine specialist. I assume no cases due to high demand

I just called Arrowine, and they'll be getting 15 cases this weekend. I reserved one, so make that 14. I've been waiting for this day for almost a year!

You can get almost ALL Bells bears at any Whole Foods. You can also get it at DVines in Columbia Heights or Adams Morgan. As a former Michigander, if you like this one, you HAVE to try Oberon when it comes out in the spring. It's the best :)

Thanks for the updates guys. I think that they have it at the Whole Foods in Reston, which is where i work. perfecto

FYI for ya'll who live in Arlington, I just got back from the Whole Foods in Clarendon, and the Hopslam is in stock. The beer guy there told me they have about 15 cases, and are limiting each customer to a case apiece.

Rodman's on Wisconsin got the largest allocation of Hopslam in the DC area this year. There is a limit of two 6-packs per customer for right now.

Does anyone know if Schneider's on the Hill is carrying this?

I picked up a six pack at D'Vines in Columbia Heights today as well. I also picked up an other sixer of Nugget Nectar to see how they stacked up against each other. Personally, I think the Nectar is better balanced, but it is an Imperial Amber and not a Double IPA. Both are highly recommended if you can find them though.

They had it on draft at Churchkey last week. Delicious!