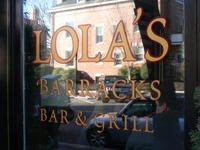 The newest restaurant on Barracks Row doesn't have a Chinatown sister and isn't generating nearly as much buzz as its neighbor, but it should.

Slipping into the restaurant on a recent afternoon, I was greeted by Lola's cozy setting and friendly bartenders. The room-length bar dominates the small space, but the dark wood and comfortable setting make the most of the restaurant's tight quarters.

Lola's is the quintessential neighborhood spot that could give nearby Tunnicliff's a run for its money. Whether it was a slow afternoon or a busy Saturday, with college football games on the picture-framed TVs lining the back of the bar, the bartenders were attentive and the food was quick.

When it comes to the kitchen, Lola's philosophy is clearly keep it simple, keep it good. The menu is straight-forward American fare, with burgers, wings and quesadillas making their mandatory appearance. Standard stuff, sure. But it's all done pretty well.

The fish tacos are among the best I've had in D.C. Wrapped in a grilled tortilla, the mahi mahi was gently seasoned and tasted fresh enough to have been swimming that morning. The salad that came with it showed the kitchen offers more than old lettuce pulled from the back of the refrigerator. On another visit, I skipped the greens and gave in to fries. I'm glad I did. The fries were crispy and salted perfectly.

And then there were the sliders, D.C. restaurants' favorite trend behind Belgium beers and just ahead of charcruterie platters. However, Lola's forgoes the gray-meat burgers for their take on the popular appetizer: sloppy joe sliders. Like the rest of the place, a simple idea done well. The sliders were messy -- as advertised -- and delicious. The cheese and pickle that capped the tiny sandwiches weren't necessary, but didn't get in the way of the “Wonder Years” moment the sloppy joe mix and dinner rolls gave me.

Now, Lola's isn't without a few flaws. The overcooked Black Angus burger made me glad the sloppy joe sliders were well sauced. The Chesapeake chicken wings needed much more than a light dusting of Old Bay, though the blue cheese sauced tasted like it was made in-house. And as comfortable as the bar seating is, expect to get jostled if you're seated by the tables in the back. The narrow space between the bar and the tables is the only way to get to the restrooms.

Even the hospitality and service that were so good on two occasions had problems on the third. The staff that juggled a busy room on an earlier visit seemed a bit overwhelmed. Beers that were ordered sat poured and tantalizingly close below the taps as our bartender got distracted by other customers and familiar faces at the bar. After a while, we were able to catch the attention of another bartender speeding by long enough to get our drinks. The bartenders weren't the only ones harried by the crowd. Dishes that had come out quickly on earlier visits took more than half an hour to find us.

But such problems are fixable and easy to overlook as you tuck into a seat along the bar or snag the table at the front of the house, giving you a view of 8th Street and the Marines across the street. The restaurant a couple blocks down might be drawing more attention, but the other newcomer to Barracks Row might just be the better choice.