Weekly Blog Round Up - DCFoodies.com 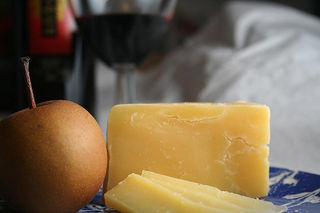 Better late than never for Washington DC's Winter Restaurant Week 2009. With reports estimating that businesses in the city pulled in a whopping 1 billion dollars on Inauguration Day, it makes sense that DC postponed Restaurant Week until Feb. 16th-22nd. The news was announced this week on blogs (Washingtonian's Best Bites) and boards (Chowhound).

Local food blogger, Colleen, of Foodie Tots (locavorism, environment, family), along with a foodie friend from Minneapolis, has launched a new blog, called Cheese and Champange. From their website:

Cheese & Champagne is a joint project by two cheese-obsessed friends tasting our way through the Wine Spectator “100 Great Cheeses” list.* One in the ‘burbs of Washington, D.C., and one in Minneapolis, MN, we are sharing our tasting notes here twice a week.

Be sure to check out their reviews and beautiful photos (photo above credited to and courtesy of Cheese and Champagne).

The Going Out Gurus reported that The General Store in Silver Spring, Md. is expected to open Saturday for take-out (limited menu) only  business (for now) until parking issues can be squared away. Expect "Cracker Barrel with good food", states Robin Smith, partner of Gillian Clark.

According to the Chinese Zodiac, 2008 was the Year of the Rat. In the DC area, it was the year of the cupcake vendor. Now it's your turn. If you can bake a mean cupcake, Lauren De Santis of Capital Cooking (the Capital Cooking Show) would love to hear from you. She will be filming an episode called "Crazy for Cupcakes". You can submit your favorite recipe for a chance to appear on her show.

Since I mentioned it, 2009 is the Year of the Ox. Chowhound's DC board has a nice thread on where to go to celebrate, beginning January 26th.

I've been a fan of Where In DC's blog for a while now. I like the formula for reviewing restaurants-an honest synopsis of the food, service and atmosphere, followed by location, hours and contact information. Recently, WIDC visited Pollo Granjero in Adams Morgan (not your best bet for rotisserie chicken), and Huong Viet in Falls Church (decent Pho). The site is updated often with reviews and recipes.

Huong Viet rocks, but it's not a pho restaurant. Hence, no "pho" in its name.