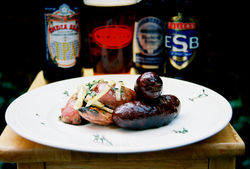 “I think this is my final step from vegetarianism.”

That was the line I got from Tim – a recovering vegetarian – when I invited him and his still vegetarian wife Melissa over for a lunch of grilled blood sausages and potatoes.

The menu was a twist on the British classic, bangers and mash. Rather than using traditional beef or pork sausages, I grilled up a few blood sausages, thick with coagulated blood and delicious pork parts. Instead of mashing the potatoes, I cooked them on the grill with sweet yellow onions and seasoned with fresh thyme.

Blood sausages, a staple of British cuisine that like many foods is as wonderful as it is intimidating. In the U.K., you’re likely to encounter them at breakfast alongside a pool of baked beans and seared tomatoes. The western omelet at Denny’s it ain’t, but it’s a pretty mean meal.

Few foods back up the adage “when in Rome” quite like those dark maroon links. Once I tried blood sausages, I was hooked. There's just something about that unctuous, iron flavor and soft texture that's irresistible. Unfortunately, they can be hard to find on this side of the Atlantic.

So it was to my great surprise when I stumbled across them at Eastern Market. Rather than being kept among the rest of the sausages at Canales Delicatessen, the blood sausages were tucked between the smoked meats and fatback a cooler away. I’m not sure what led to their exile and I don’t really care. I found someone selling blood sausages. 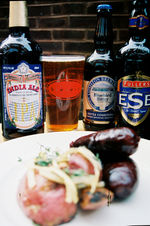 Although the British are not a grilling people, my first thought was to get the sausages over hot charcoal. Sausages were meant to be grilled and blood sausages are no different. The potatoes were a critical accompaniment. As much as I love blood sausages, they are rich, rich. The starch of the potatoes is necessary to cut the intense iron and meat flavors. The thyme ties it all together, reminding me why the British love the herb so much.

My approach to bangers and mash might be askew, but my love of British beer rests squarely in the traditional bitters and pale ales. Deep in flavor and low in alcohol, few things are as good as spending an afternoon drinking pints of English bitter with friends. For lunch, I picked up bottles of Fuller’s ESB, Bluebird Bitter and Samuel Smith’s India Ale (maybe the best beer brewed today). Each was different, each was delicious.

Aside from the ingredients and beer, there was little about the meal that was particularly British. But as with the Magna Carta, the Queen’s English and this former colony, we’ve been improving on British creations for an awfully long time.

Boil the quartered potatoes, drain and set aside to cool. Light the grill and pull the sausages out of the refrigerator so they can loose some of their chill.

Coat the onions with the remaining olive oil before putting them on the grill with the sausages. Cook the onions and sausages just off the hottest part of the grill for 5 minutes. Flip and cook for another 5 minutes.

Pull the onions and sausages off the grill, let the meat rest for a few minutes (just enough time to pour a few pints of bitter) before plating with the potatoes. Scatter a good amount of fresh thyme over the potatoes and enjoy.

So are these blood sausages the same thing as keishka? (no polish jokes, please.) Because I love keishka! And I was under the impression that I might be the only one in the district to feel that way. At home in Delaware (home of scrapple and other suspicious meat products) it shows up around Easter time, along with the butter lamb, kielbasa and pickled tomatoes. But I havent seen it here. Eastern Market, here I come.

Must ... resist ... Polish ... jokes. Anyway, from what I can glean from Wikipedia about the keishka, the blood sausages I found, and am used too, is a bit different. I looks like keishkas include a grain in the ingredients, whereas the blood sausages I'm accustomed to and found at Eastern Market were pretty much all blood and pig parts. Still, if you're into keishkas, blood bangers might be right up your alley.