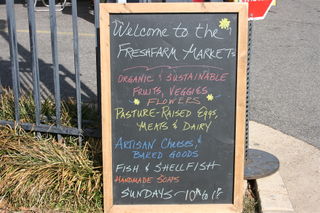 In my pursuit of Winter time farmers markets, I've shied away from the behemoth that is the Dupont Circle Farmers Market for several reasons.  One of the biggest reasons is because the market is always so crowded, it's hard to get your bearings straight.  When I go to a farmers market, I like to take my time and survey the offerings carefully before deciding on what to buy.  No matter what time you go to the Dupont Circle Farmers Market, there are a lot of people trying to navigate around a small patch of land.  This also makes it harder to have conversations with the vendors about their products, as they are running around trying to attend to the hordes of Sunday morning market goers.  Another reason I have spent most of the Winter steering clear of the Dupont Circle Farmers Market is because it's so well known, it really doesn't need any more publicity (as evident by the above mentioned crowds).  A number of the markets I've visited since November have been ones I had never known about before I started writing for DCFoodies.  I have enjoyed discovering the many markets around the DC area and highlighting them for others to discover.  Writing about the Dupont Circle Farmers Market just seemed a bit redundant and I was more inclined to explore other markets instead.  But last Sunday, I decided to head out again to my old and familiar market stomping grounds in search of lesser known vendors.

I arrived around 11 in the morning to be greeted by a glut of people spilling out onto the street.  The crowd was waiting in line for their turn at Bonaparte Breads, a local bakery with a Parisian feel.  Known for their French breads, pastries and desserts, Bonaparte Breads has become a wildly popular vendor at Dupont Circle.  Their baguettes have been a favorite of mine to use for stuffed chicken salad sandwiches, a hit at picnics and various other romantic attempts to eat outdoors.  Their Opera Torte, an almond sponge cake with layers of ganache and buttercream, is the quintessential French pastry and one of their best sellers at their Savage Mill cafe location.  Unfortunately, by the time I got to the market, they had already sold out of their baguettes...and most of their other offerings.  That was when I was quickly reminded you have to get to Dupont Circle early if you want the best selection.

I traveled on in search of lunch ideas for the week and hit upon Twin Springs Fruit Farm.  Like a lot of 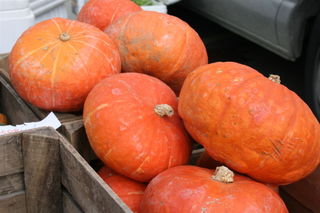 farms in the area, Twin Springs Fruit Farm is not a certified organic farm.  I spoke briefly with one of the employees and learned they use a minimal amount of pesticides and only when absolutely necessary.  The pesticides they do use are organic in nature, thus reducing the use of harsh chemicals for their crops. For more stubborn pests, Twin Springs turns to mother nature for assistance by doing a controlled release of "predator bugs".  These predator bugs help to control the population of harmful pests without chemicals.  I asked what then becomes of the predator bugs and was told they either move on or die off and do not harm or effect the crop in any manner.  There was a bounty of Winter squash (some of the last of the season) amongst their tables, so I decided to pick up a red kuri squash to roast for later.  I also picked up a few red and yellow onions with the intent to caramelize them for something (in my world caramelized onions solve all the world's ills).

As I continued along, I stumbled upon a meat vendor I hadn't really noticed before, Cedarbrook Farm.  Located in West Virginia, Cedarbrook Farm is a certified organic farm that specializes in both raising free range animals and growing a wide variety of vegetables.  Their motto, "no hormones, no preservatives and no fillers" pretty much says it all.  Offering almost every pork product imaginable, Cedarbrook Farm also offers eggs from free range hens.  As was the case with a lot of the vendors, I wasn't able to speak with the person manning their stand because of the glut of people clamoring for everything from shoulder roasts to lard.  While trying to decide if I wanted to buy anything from them, I briefly spoke with a lady in the line.  I asked her if she'd bought anything from them before and she smiled, nodding profusely.  "I just adore their ribs.  When the weather gets warm, I love to throw them on the grill with a hoison sauce marinade."  I tucked that idea away for the upcoming Summer but opted not to buy anything from them this go round.

While I will freely admit I stopped at my old familiar favorites, Blue Ridge Dairy and Atwater Bakery, I also happened upon another vendor I hadn't really noticed before: Everona Dairy.  Unlike some of the other stands, I was able to freely chat with the lady handing out cheese samples at the stand.  I asked for recommendations for a cheese that would work well with a ravioli.  Almost instantly, she reached for their Cracked Pepper Piedmont, an aged sheep's milk cheese.  Everona Dairy, located in the Piedmont region of Virginia, has won awards for its Piedmont cheese, including the 2005 American Cheese Society's best Farmhouse sheep's milk cheese.  The cracked pepper cheese had a nutty undertone to it, reminiscent of a finely aged parmesan.  The cracked pepper added a kick to the softer tasting cheese, making it perfect for a pasta dish.  I picked up a pound of the cheese with the intent of making a ravioli with the roasted red kuri squash.  However, after making a pizza the previous week, I decided to try my hand at a calzone using a homemade olive oil dough from one of my favorite cookbooks, Artisan Bread in Five Minutes a Day.

Cut the red kuri squash in quarters and remove the seeds from each section.  Lightly salt and pepper 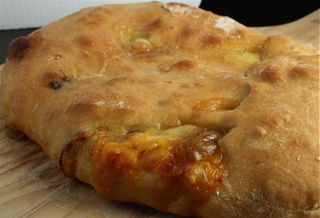 each section and place in a roasting pan.  Roast for approximately 45 minutes or until the flesh is soft.  Remove from the oven and allow to cool.  If you have a pizza stone, place it in the oven immediately after the squash has finished roasting.Once cooled, scoop the flesh out of the skin and place in a bowl.  Whip together the flesh until it's a smooth texture.

Heat the olive oil in a skillet over medium high heat.  Add the onions and let them sit for 45 seconds.  After that, continuously stir the onions as they slowly start to brown and caramelize.  Continue to cook them, stirring constantly, until the onions are fully caramelized, about 20 minutes.  Remove the pan from the heat and allow the onions to cool.

The Dupont Circle Farmers Market is held every Sunday from 10 am to 1 pm (during the Winter), but make sure to come early for the best selection.  Its located on the circle between Massachusetts Avenue and Q Street in the heart of Dupont Circle.

You say, "A number of the markets I've visited since November...". What other markets besides Arlington and Takoma are open since November?

One more for the list, this one on a weekday: The Clarendon Farmer's Market, which is held year-round on Wednesdays from 2 - 7 p.m. at the Clarendon Metro Station.

The Del Ray market is unofficially open this winter, with Tom the cheese guy, Smith Meadows (meats & pasta) and a bakery. Smith Meadows has also been bringing a very small selection of produce (apples, beets, potatoes) from a neighboring farm. It's a test-run to get the city to allow them to go year-round so please check it out if you're in the area!