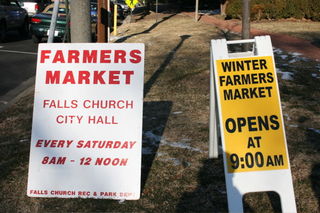 On Saturday morning, with a biting cold wind whipping against my face, I headed to the Falls Church Farmers Market for the first time.  I didn't even know this market existed until a reader mentioned it on my post about the Takoma Park Farmers Market.  I will be eternally grateful for that tip because I thoroughly loved this market.  From the fresh crepe stand to the booth of hot coffee, this market had a true communal feel.  All of the market vendors were nice and more than willing to talk about their wares and how to prepare them.  I found some new gems and was pleasantly surprised to see some old favorites.  And considering the number of vendors present during the Winter, I have a feeling this market is hoping during the Spring.

Upon first walking into the market, you're greeted by the smells of freshly brewed coffee from Hondo Coffee Company, a local coffee company with global ideals.  Hondo Coffee Company partners with Project Honduras, an organization created to better developing countries through the means of self sufficiency as opposed to reliance of foreign aid.  The Hondo Coffee Company gets their beans from farms in Honduras who strictly adhere to a no pesticide/fair worker wage policy.  Their mission is to not only provide their customers with the finest coffee but to assist third world countries in responsible and sustaining development. 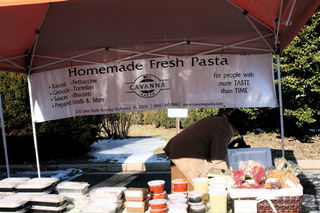 Hondo's next door neighbor was an unassuming little stand with a large banner proclaiming Homemade Fresh Pasta "For People With More TASTE Than TIME".  The vendor, Cavanna Pasta, had a table laden with fresh pastas (from fettuccine to taglierini), homemade sauces (including a delectable looking porcini ragout) and pre-filled raviolis in an assortment of flavors (including pumpkin, porcini and artichoke).  The woman manning the stand was bundled up to the hilt but was still smiling, laughing and offering serving suggestions.  Based in Richmond, Virginia, Cavanna Pasta can also be found at farmers markets in Arlington and Alexandria year round.  Cavanna Pasta also holds the distinction of being voted best pasta by Richmond Magazine in 2006.  I picked up a pound of their fettuccine with the intent of making an easy but delicious alfredo sauce to accompany it. 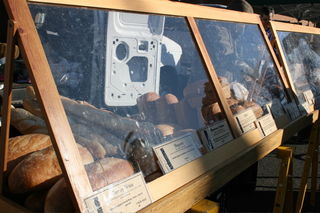 As I walked along, I was happy to see some familiar faces, including Cibola Farms and Atwater's Bakery.  I have a slight obsession with Atwater's 10 Grain Bread (I've spent more time than is probably healthy trying to recreate it in my own kitchen), so I was particularly thrilled to see their familiar row of breads encased in a glass display.  Although the 10 Grain Bread beckoned me to buy a loaf, I opted for the San Francisco sourdough with the intent to turn them into croutons for a soup I had in mind for the week's lunch.  A favorite from my trips to the Takoma Park Farmers Market, Smith Meadow Farm, also had a booth at the market.  I told one of the ladies at the stand I wanted to make a beef stock and she provided me with four pounds of beef soup bones and bone marrow.  As we were calculating the cost of my purchases, I saw they had homemade chicken stock from their very own stew hens, so I added that to the pile.  Although I didn't need it for this week's meals, I knew I could freeze the stock for later use.

At this point, my market bag was getting rather heavy (and I really felt guilty because my boyfriend Rick was carrying it).  But there was still quite a few vendors left to visit, which surprised me considering it was Winter.  I spotted an unfamiliar meat vendor that, oddly enough, was also a bakery.  Valentine's Country Bakery and Meats had a wide selection of beef, pork and poultry products, as well as a whole other section devoted to breads, pastries and even free range eggs.  I decided to get a pork Boston butt for a slow roasted pork dish I had been planning to make since watching this mini featurette on the DVD Desperado.  Do not ask me why there is a cooking lesson on a movie DVD...just trust me that it's an exceptional recipe to make. 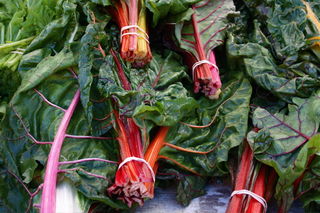 I decided to round out my visit with some lovely mushrooms and a green of some sort.  I first stumbled upon the mushrooms at the Mother Earth Organics stand.  They had a good selection of 'shrooms, including some beautiful portabellas and shiitakes, both of which are great for pasta dishes.  As I was selecting my mushrooms, the vendor asked how I liked my camera, a Canon Rebel XTi.  What began as a simple mushroom purchase happily turned into a discussion on the pros and cons of dSLR cameras.  I immediately decided to throw them into my alfredo sauce, along with a rainbow chard that had caught my eye at Potomac Vegetable Farms.  PVF was first started by the Newcombs back in the mid-60's.  Federal government employees with no farming experience, the Newcombs started the farm with the intent to grow organic produce responsibly.  Now almost five decades later, Hiu Newcomb continues to manage the farm her and her now deceased husband Tony started.  Although no longer certified organic, PVF still adheres strictly to organic farming procedures but have opted out of the sometimes complex and time consuming certification process.  I picked up a bunch of their chard, along with several pounds of potates (for a hearty creamy potato soup for the cold week ahead) and a vibrant bunch of flat leaf parsley.  Heading out, I looked longingly at the crepe stand but the fairly large crowd around it and the lack of feeling in my fingers nixed the idea of a ham and swiss crepe.  Instead, I went home and made a quick but delicious lunch of sauteed mushroom and rainbow chard fettuccine alfredo. 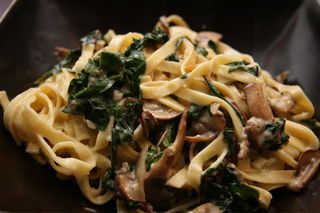 Place a large pot of water on the stove to boil for the pasta.  While waiting for the water, slice up the mushrooms and the chard and set aside.  In a large skillet, heat up the olive oil on high.  When the oil is hot, add the mushrooms making sure they form a single layer on the bottom of the pan.  Allow the mushrooms to cook for four minutes, but do not stir them!  After the four minutes have passed, sprinkle the mushrooms with salt and pepper and then toss them to coat.  Add the chard and continue to saute until it has wilted.  Set it aside.

In a warm bowl, add the heavy cream and the eggs, whisking until combined.  Add the cheese and a good grind of fresh pepper.  Whisk again until the cheese is completely incorporated into the egg and cream mixture.  Set this aside.  Salt the boiling water and add the pasta, cooking for two to three minutes.  Drain the pasta, reserving a cup of the pasta water.  In a large bowl, toss the pasta with the cheese/cream mixture until well coated.  Add the mushrooms and chard and toss again to incorporate.  When serving, feel free to top with some additional cheese.

I had *no* idea that the Falls Church farmer's market was open during the winter - wonderful news!!

I know what I'll be doing next Saturday.

I ALSO made my first visit to the Falls Church farmer's market this weekend. I got some good local wine, fresh farm eggs, organic pork shoulder, fresh salsa, and some granny smith apples. The vendors were diverse and friendly, and the prices at most of the stands were reasonable. Almost each stand has samples of every product available. If I had tried everything, I wouldn't have had room for lunch! I will definitely be going back frequently. Hopefully spreading the word about the market will help it to grow!

This has inspired me to visit the Farmer's market this weekend!

Our market has been a local "hidden treasure" for a few seasons ... enjoy!

This market definitely deserves a look see. I am a veteran of shopping farmers markets but this one stood out for how helpful and friendly all the producers were and it's obvious they try to provide a nice mix of vendors. I will definitely be back (if for nothing else but the yumtastic Greek style yogurt from Blue Ridge Dairy...addictively good!).

Are they the crepes that you eat in a cone like from the stands in Paris, or on a plate?

Melissa, the crepes are served in a cone - just like in Paris!