In defense of the dry martini 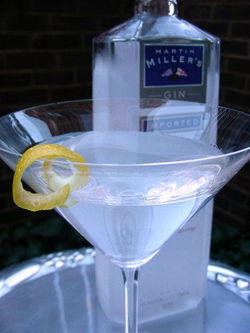 It's one thing for The Washington Post to attack my favorite cocktail. It's quite another when D.C. Foodies' own Rob Rutledge does it.

I can only surmise that Rob and the Post's Jason Wilson are in cahoots to ruin the martini.

A few weeks ago, Wilson wrote in his Spirits column that the era the dry martini is coming to close. No longer would we be forced to drink the drink of Churchill and Hemingway. Finally, we can add dry vermouth -- lots of dry vermouth -- to the drink.

Rob followed with his own attack on the dry martini. It hardly qualifies as a cocktail, he said. D.C. bartenders are now mixing 50-50 gin and vermouth martinis, he said. The dry martini is your grandpa's drink, they both said.

People, the dry martini is one of the single greatest cocktails ever constructed. When done properly, it's crisp, bracing and ever so slightly sweet. It's everything you want in a proper cocktail.

If all that gin is too much for you, maybe you should stick to vodka tonics.

Speaking of vodka, let's be clear about what a martini is. On this point, Wilson was right. A martini is gin, dry vermouth and garnish, stirred and served in a cocktail glass. While the olive is the common garnish, I prefer a lemon twist. If I want to change it up a bit, I add a few dashes of orange bitters.

What the martini is not is a vodka and vermouth cocktail. Gin is the martini's foundational ingredient. It's the bedrock for which the drink is constructed upon. Replace it and you have a different drink.

As the foundational ingredient, gin should be the prominent ingredient. I like the story about Churchill merely tipping his glass toward France to give his martini his preferred amount of vermouth. But if the story is true, the prime minister was not drinking a martini.

On the other hand, by overwhelming the martini with dry vermouth, you lose the flavor of the spirit. Gin has a distinct herbal character, but it's easily drowned out by the vermouth.

Now, if you're a fan of vermouth, by all means dump as much as you like to your martini. But Papa, the prime minister and I will continue to enjoy our martinis dry, very dry.

Fill a shaker half full with ice and add the dry vermouth. Stir and vermouth to coat the ice cubes and strain the excess. Add the gin, stir and pour into a chilled cocktail glass. Garnish with the lemon twist.

Its nice to see someone who knows what a real cocktail is. Just enough vermouth to coat and flavor the ice.

Vermouth must be brain damaging if consumed in large quantities. Wilson and Rutledge simply show a lack of appreciation for gin (and spirits in general). They condone a nondrinker's martini--one that masks the flavor of the liquor rather than enhances it. I'll continue to take my martinis dry, my scotch neat, and my vodka straight. They should stick with their appletinis.

My wife has been drinking Martini's for over 40 years. She loves it extra dry. When its not, she returns it. One of the best she evr had was in a small bar off Rittenhouse Square in Philly. Gin over ice to chill it. Vermouth poured into a cold glass, then swirled and thrown out. Pour the gin into the glass and add a twist.

I stopped by The Source for the first time last week and ordered a dry martini. To my delight, I got just that. Whether it's fair or not, I judge the quality of bars by how well they make a martini. More often than not, unfortunately, my dry martini comes out heavy on the vermouth and ice chips. So when I find a place that makes a proper dry martini, I think much more highly of that place.

all this talk about dry martinis is making me thirsty. and yes, a martini has GIN!!

Ok, it looks like I'm a week or so behind on my blog reading, but I think I must chime in. A martini of 3 ounces gin plus another 1/4 oz. (1 tsp) vermouth? That sounds like it should work. Except that, truthiness aside, it doesn't. If you stir this ratio the right way, and allow for the usual amount of dilution, it would not fit in a classic 4.5 oz. cocktail glass. And since that's the size of the glass that the people who invented the dry martini envisioned, I'd say you've probably got your ratio wrong. For your drink, you'd need a glass the size that usually holds the appletinis that "Tim" speaks of.

Speaking of Tim...a "nondrinker's" martini? No. A lack of appreciation for gin? Um, no. Come on, dude. Are you like 19? I'm certain you'd be able to drink twice as many martinis and they'd taste better if you just made them the right way. But you're the big drinker, so you tell me.

Wow, thanks for wieghing in Jason. However, let me clarify my martini recipe. Because you strain off any vermouth that doesn't adhere to the ice cubes, you end up with a 3 oz. beverage, which would fit nicely in a 4.5 oz. cocktail glass. Now, you mention stiring the ratio the right way and the usual amount of dilution. I realize there is an art to stiring a cocktail (which can be quite involved), but because you're combining a particularly small amount of vermouth with the gin, you really don't need to spend too much time on this task. A few go arounds in the shaker is more than sufficient. As for the usual amount of dilution, you got me buddy. I have no idea what the usual amount of dilution is. All that being said, one can never know a recipe or a cocktail without trying it out. So I would encourage you to give the recipe a try. I'd love to hear what you think. Heck, I'd be happy to whip up the drink for you.

Hey Drew, fair enough. I'll make it this weekend. I do see I made a typo (was I on my 3rd martini?). I meant 3.5 oz glass which would have been about the size of an early 20th century glass. My basic (tortured) point was simply that the drink wasn't invented for 3 ounces of booze and it changed with the larger glass sizes in the mid to late 20th century. I know: So what about history? But the thing is we still follow recipes from 100 years ago with most of the classic drinks.

Ok Drew, so I made the 12 to 1 Plymouth gin martini that you swear by...well, I'm still not a fan...I really do think you lose the complexity of the drink at that ratio. Even if you used a 1/2 oz. of a good vermouth like Dolin it would be better. However, if 12 to 1 is what you like, then by all means. In the end, the most important thing is to drink what you like...

Cheers to that, Jason.