Dolin Vermouth, Because a Dry Cocktail is Hard to Drink. 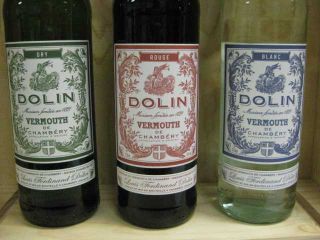 Most casual drinkers shun vermouth as the bastard stepchild of the cocktail world, barely tolerating it in some scenarios, and sometimes ignoring it altogether. We all know those old jokes about how to make a dry martini (glance at a bottle of vermouth across the room, wave a bottle over over your glass, etc), now the most common and well regarded iteration of the beverage, and which, in my mind, hardly qualifies as ancocktail.

But I won't belabor the point. Jason Wilson of the Washington Post wrote a great feature last Wednesday on this very subject. Towards the end of the article, Jason interviews kindred spirit Derek Brown of The Gibson — a swank new cocktail lounge on U Street NW — who mentions in passing a new brand of vermouth called Dolin.

Just as Prohibition-era drinkers forewent vermouth for lack of availability, contemporary drinkers have their reasons. As far as mixers go, most brands of vermouth are a bit dull, and the sweet ones are almost sickly so. Why spice up a perfectly good, expensive gin or whiskey with a cheap-ass, lower-alcohol liqueur that tastes like bad wine and Mrs. Dash? Dolin makes a welcome addition to a field dominated by bland, industrialized incarnations of the classic spirit.

I call Dolin new, but it is actually quite old, having been produced in the Chambery region of France since the early 19th century. One of the most important distinctions between Dolin and other vermouth is that it has AOC certification, holding it up to the same rules and standards as the other fine wines of France. This limits Dolin to certain time-honored processes such as herbal infusion, natural caramel coloring and sweetening with sugar (I know, crazy, right?). As such, the wines are a bit less sweet than the factory stuff, and also a less intense in color, allowing the most important facet of the beverage, the spices, to shine through.

Dolin makes all three of the classic vermouth styles — Blanc, Rouge and Dry — each crafted with its own collection of secret herbs and spices. Both the Blanc and the Dry pour completely clear, lacking that slightly yellow haze you get from Martini & Rossi and the like. The Dry (17.5% abv, 30 g/l sugar) has a subtle, slightly grassy nose, mingled with aromas of lime, thyme, and white wine. On the palate it is noticeably lighter in body that most, and totally lacks that acrid sting on the finish that is typical of the drink. The Blanc (a sweet incarnation of white vermouth, 16.0% abv, 130 g/l sugar) has a beautiful nose of white cake, orange peel, flowers and cloves, with these flavors persisting on the palate, followed by a long, surprisingly fresh and acidic finish. The Rouge (16% abv, 130 g/l sugar) pours a golden-brown color like off-dry sherry. The nose gives one the immediate impression of oxidized pasta sauce, coming on strong with oregano and roasted tomatoes, along with sherry, sage, and red apple skins. Like the others, this one is far less viscous on the palate than we have come to expect, and though quite sweet it finishes dry and herbaceous.

Dolin's price is surprisingly reasonable for the quality, running about $15 per bottle retail, which is only a bit more than the established competition — expect to see it in a number of shops in the near future. I asked my distributor what bars have picked it up, and was handed a laundry list including Bourbon, Gibson, Rasika, Bar Pilar, Central, Poste, and Urbana. Go see what the quality mixologist at these fine establishments have come up with, or order a classic cocktail and see if you can taste the difference. And though it might get you thrown out of the will if Grandpa finds out, go for a 50-50 mix in your Martini or Manhattan.